Are safety and high performance a big concern for you while developing web applications?

While most programming languages have a safety or speed trade-off, Rust provides memory safety without using a garbage collector. This means that with its low memory footprint, you can build high-performance and secure web apps with relative ease.

You'll start with an introduction to Rust and understand how to avoid common pitfalls when migrating from traditional dynamic programming languages. The book will show you how to structure Rust code for a project that spans multiple pages and modules. Next, you'll explore the Actix Web framework and get a basic web server up and running. As you advance, you'll learn how to process JSON requests and display data from the web app via HTML, CSS, and JavaScript. You'll also be able to persist data and create RESTful services in Rust. Later, you'll build an automated deployment process for the app on an AWS EC2 instance and Docker Hub. Finally, you'll play around with some popular web frameworks in Rust and compare them.

By the end of this Rust book, you'll be able to confidently create scalable and fast web applications with Rust.

Rust is a memory safe programming language. However, new developers can feel intimidated when picking up Rust. This does not help when Rust is described as a systems language, as if this tag instantly disqualifies Rust for web development.

However, we have to remember that Rust is memory safe. If we, as experienced web developers in other memory safe languages, understand the quirks of Rust such as borrow checking and lifetimes, we can code in Rust in a productive way. If we get to grips with package management (known as crates) and modules, there is nothing stopping us from building structured and safe applications in Rust in a fast paced manner.

This section gets the experienced web developer up and running with the basics of Rust and covers concepts that will enable you to structure a web app.

Read more Unlock this book with a 7 day free trial.
About the Author
Very poor book. Most people can't get right way in Rust Web Development through this book. 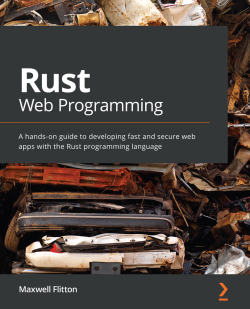