Hands-On Design Patterns with Java starts with an introduction to the Unified Modeling Language (UML), and delves into class and object diagrams with the help of detailed examples. You'll study concepts and approaches to object-oriented programming (OOP) and OOP design patterns to build robust applications. As you advance, you'll explore the categories of GOF design patterns, such as behavioral, creational, and structural, that help you improve code readability and enable large-scale reuse of software. You’ll also discover how to work effectively with microservices and serverless architectures by using cloud design patterns, each of which is thoroughly explained and accompanied by real-world programming solutions.

By the end of the book, you’ll be able to speed up your software development process using the right design patterns, and you’ll be comfortable working on scalable and maintainable projects of any size.

This book features several design patterns and covers their implementation using Java. We can useÂ Unified Modeling Language (UML) to help communicate class structures, objects, and interactions. This chapter provides an overview of UML, with a specific focus on diagrams applicable to the hands-on activities in this book.

This chapter does not have any technical requirements. In order to create UML diagrams, the following open source software tool is recommended:

Modelio can be run on systems with any of the following operating systems:

UML was developed in 1994 to document object-oriented systems. Since that time, UML has become a standard tool for software engineers, software developers, and businesses. UML is used to design software and, after programming, also provides a visual record for the system which can be included as part of formal software documentation.Â

There are two types of UML diagramsâ€”behavioral and structural. Both are described in the sections that follow.

Behavioral diagrams illustrate how system components interact to form a system. The four diagrams listed here are behavioral, and are briefly described in the subsections that follow:

Activity diagrams illustrate the flow of processes in a system. This type of diagram is used to visually document activities within a system, also referred to as a system's procedures or dynamic components.Â

The following activity diagram shows the activities involved when a coffee shop customer places an order. The starting point is the top black circle. From there, an order is received. Beneath the Receive OrderÂ node is a horizontal black bar referred to as a fork. There are three activities that take place in parallel after the forkâ€”Make Drink, Get Bakery, and Collect Payment. All of those activities take place in parallel. Each of those activities feed into a second black bar, this time referred to as a join, which has multiple activities linked to it. Once all three activities are completed, the order can be completed and ends with the bottom black circle: 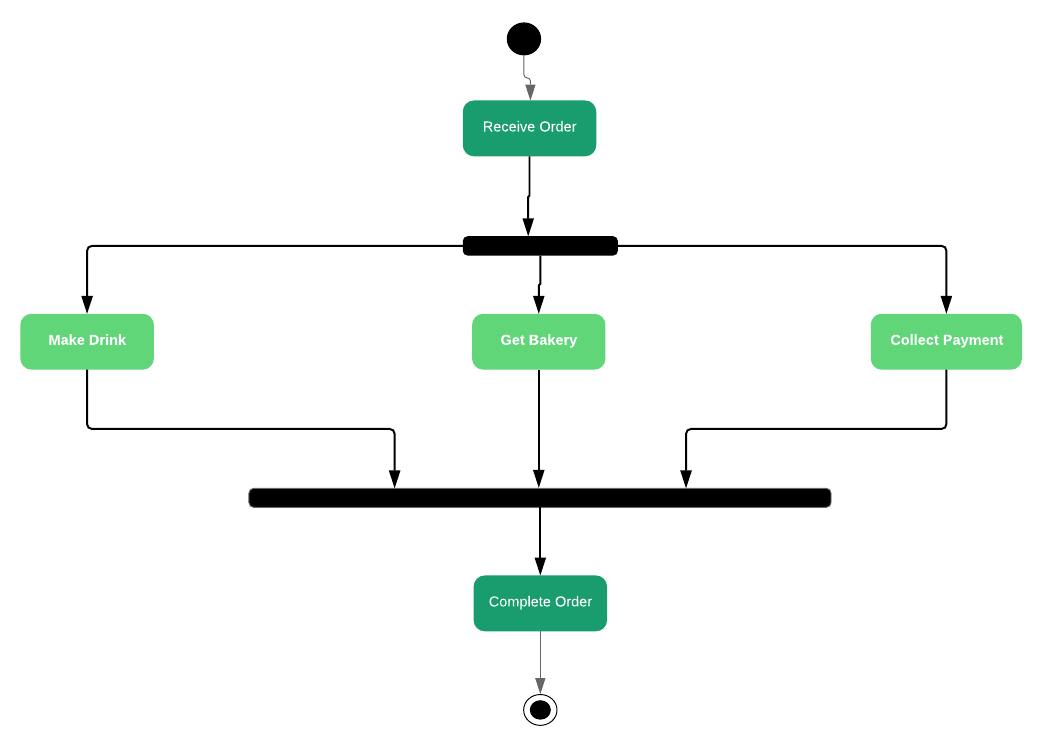 An activity diagram for a coffee shop order process

Interaction diagrams visually document how system components interact with each other.

In the following interaction diagram, you can see that the flow starts with a decision on whether the customer is a new, or already existing, customer. In both cases, the interaction between the Customer object and Customer Database object is documented: 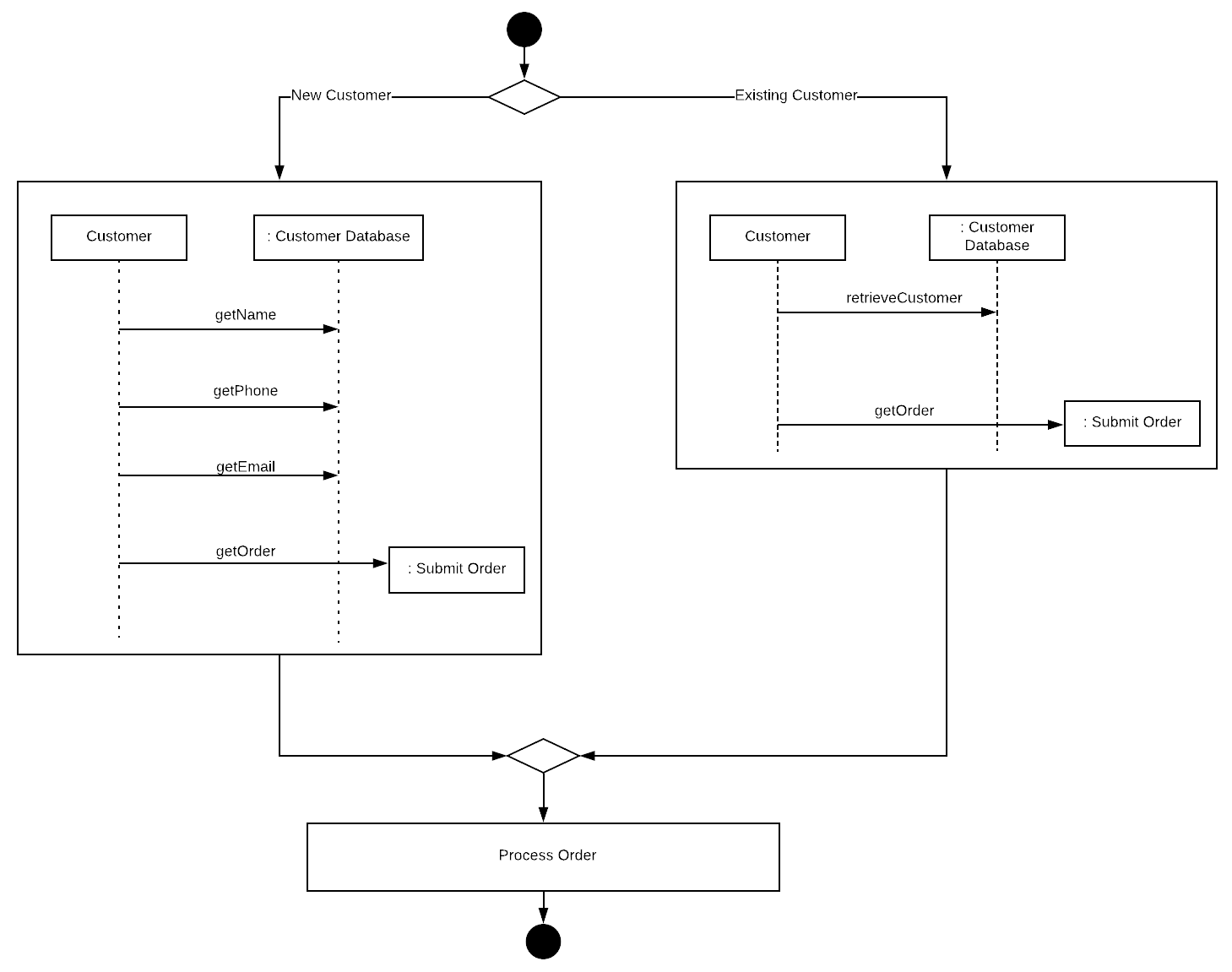 An interaction diagram for a coffee shop order

Sequence diagrams are used to show a specific use case scenario. So, these diagrams are representative of a typical behavior based on the given use case.

The following sequence diagramÂ exampleÂ visually documents the use case where a student logs on to an online book order system and enters their course code. The online system calculates a price and provides this total to the student. The student is then able to submit their payment, which goes through the online bookstore and informs the fulfillment center, which ships the books to the student: 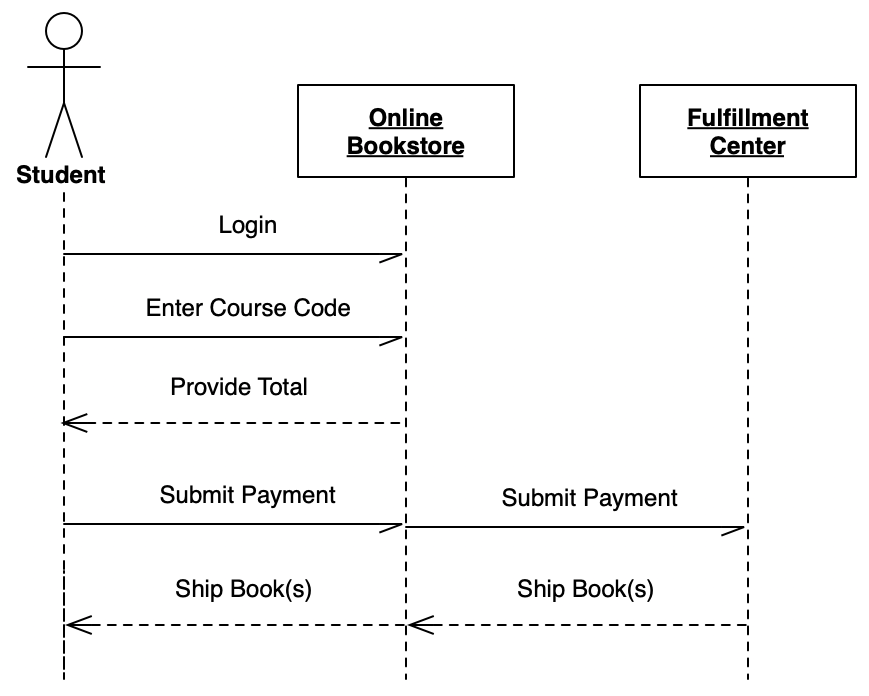 Communication diagrams are a special type of interaction diagrams. They focus on how system participants are linked to one another.Â

The following sample communication UML diagram is a partial look at an online book-ordering system. System participants and their associations are provided: 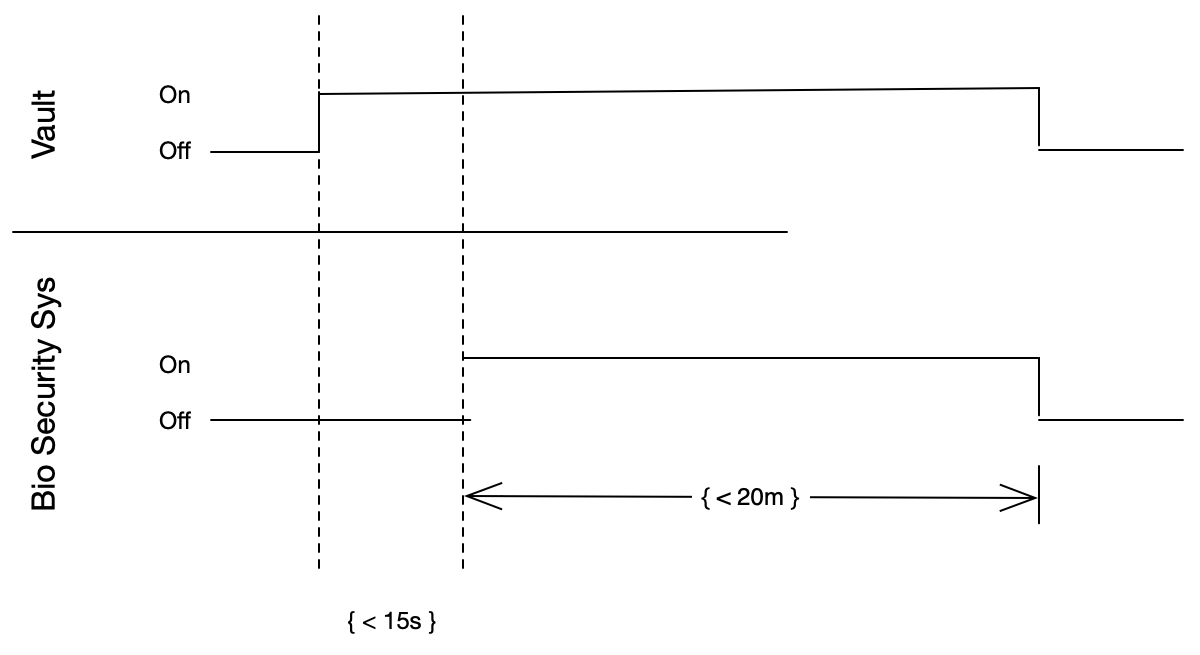 State machine diagrams are used to visually describe a system's behavior. The key components of these diagrams include states and transitions. The sample state machine provided in the following diagram is for a bank vault. The solid circle is the initial pseudo state and indicates entry into the system. There are four statesâ€”Wait, Unlock, Enable, and Vault.Â

In our bank vault example, the vault is enabled when two bank managers place their thumb on a thumbprint scanner. The vault is unlocked, contingent on a successful thumbprint scan, by entering the correct combination. When these conditions are met, the Vault state is reached and the managers can enter it:

Use case diagrams document the interactions between your users and your system. This is typically done with text, but UML does support use cases.

Let's start by looking at use cases in text, and then review a UML diagram representing the same use cases. We will use an example of a grade book for an online education institution.Â

These use cases are pretty basic and easy to understand in text. There are only a few constructs for the use case diagram in UML: 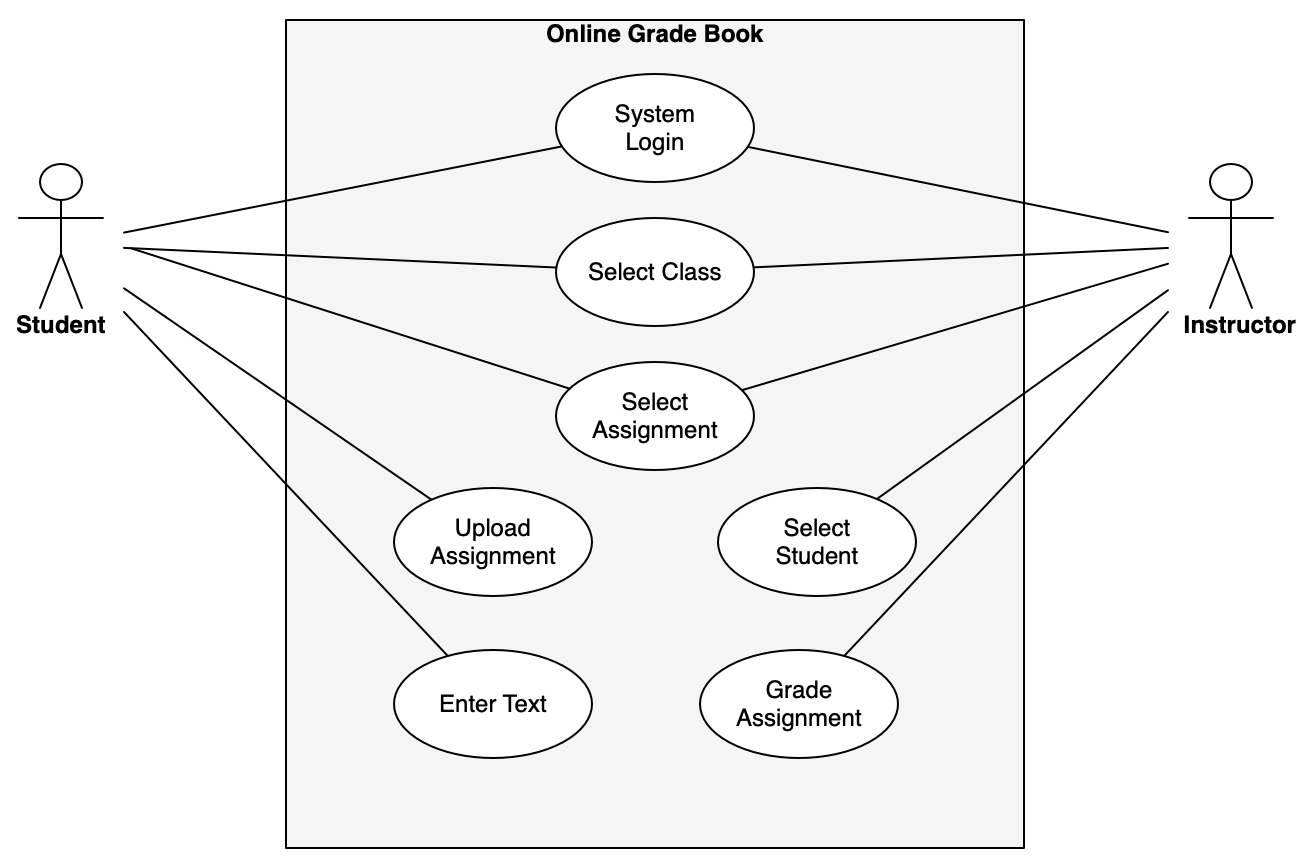 A use case diagram for an online grade book system

There are several visual components to the UML use case diagram:

These visual components are further illustrated as follows: 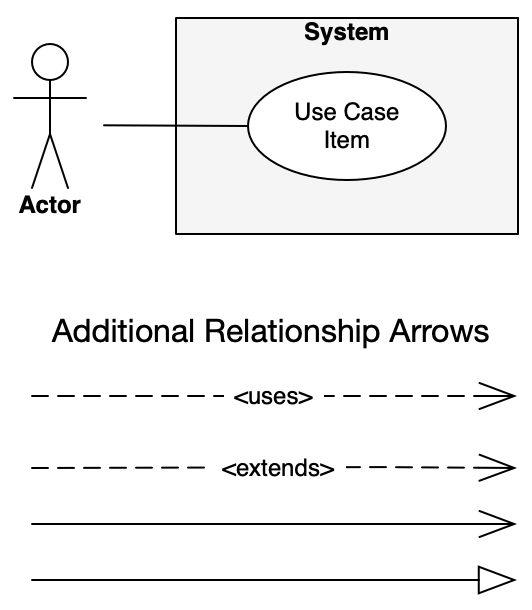 Another use case diagram for an online grade book system

Structural diagrams illustrate components of a system.Â The six diagrams listed here are structural, and are briefly described in the subsections that follow:

The class diagram is the most commonly used UML diagram, as it provides a visual description of a system's objects. Consider that, in Java, everything is an object, so you can see the relevance and reason as to why this particular diagram is so widely used. Class diagrams do more than just display objectsâ€”they visually depict their construction and relationships with other classes.Â

As you can see here, the basic component of the class diagram is a rectangle, divided into three sections. Each overall rectangle represents a class, and the class name appears using a bold typeface in the top section. The middle section contains attributes that correlate to variable fields. The third section contains operation data which, in Java, means functions and methods: 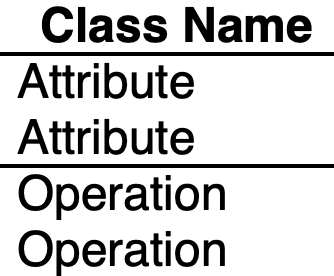 A simple example of a class diagram for a Kennel is displayed in the following diagram. The class name is Kennel, and there are three attributes (animal, breed, and name) and two operations (intake and discharge): 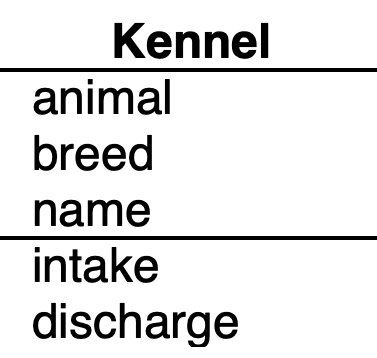 We will further explore class diagrams using our Kennel class example later in this chapter.

The relationships between these components are annotated with dotted lines in the following component diagram:

The Composite structure UML diagram shows the runtime structure of a system. This diagram can be used to show the internal components of a class. The following example shows a microwave with four structures:

We can also represent a composite structure with a rectangular box, as illustrated in the following diagram: 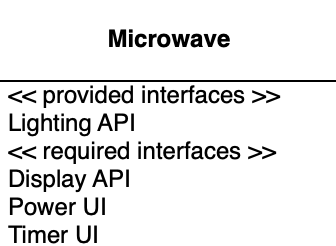 The nodes are drawn as three-dimensional rectangles and represent hardware for a software object, such as a database. As illustrated in the following example, associations are annotated with lines marked with the type of communication protocol used. Our example shows TCP/IP as the communication type: 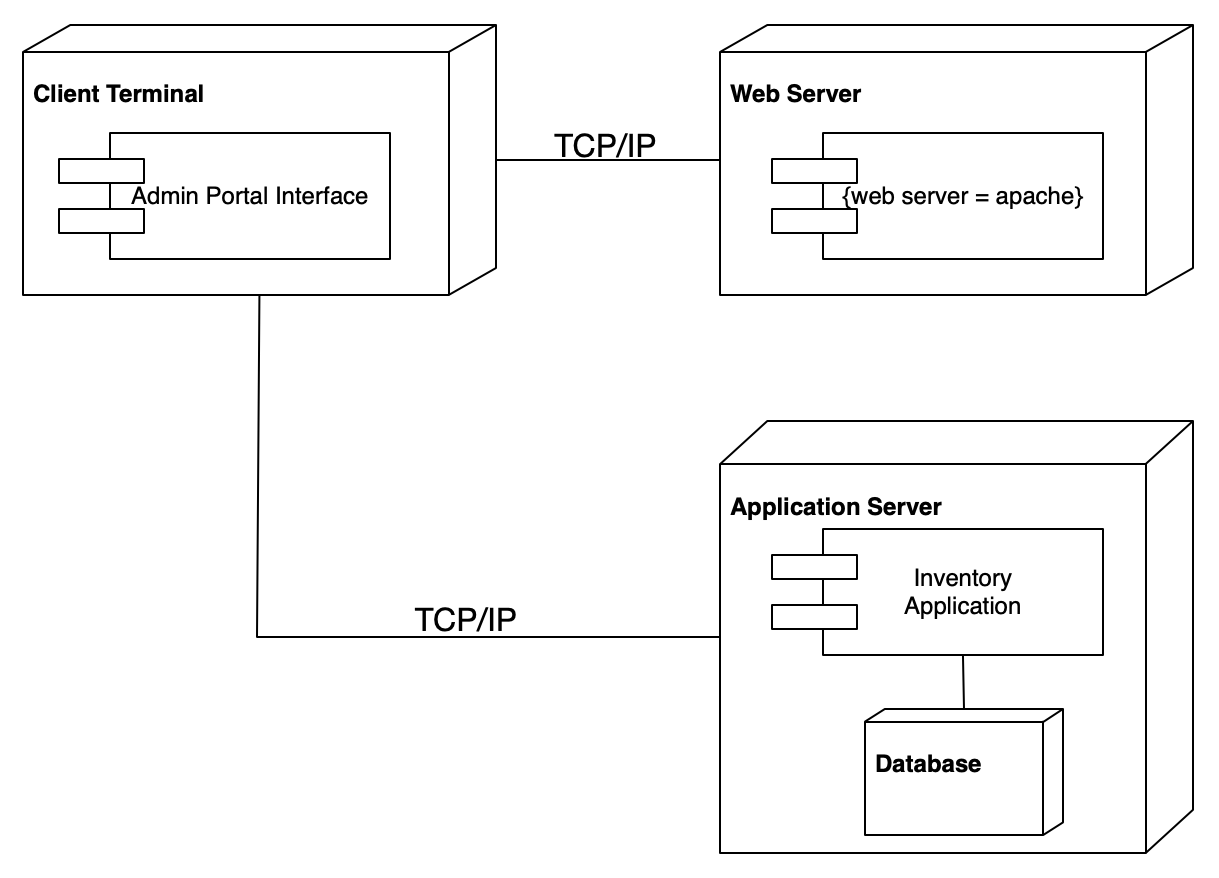 A deployment diagram for a distributed system

Deployment diagrams can be more involved than the example provided here. Our example does, however, provide sufficient insight for you to progress through the proceeding chapters.Â

Object diagrams have an unfortunate name, as it does not aptly describe this UML diagram's purpose. The object diagram visually communicates a set of class instances. In fact, the instances have mostly optional components and are often only partially depicted. Therefore, a more apt name for this diagram might be a loosely defined instance UML diagram.

The following example depicts four objects and their hierarchy. Because each object is an instance of a class, it is underlined and followed by a colon and the class name:

Package diagrams are used to provide a high-level visual depiction of large systems. These diagrams are simplistic and simply show how a system's components are grouped. The following example illustrates nested packages, starting with Java and drilling down to the ArrayList: 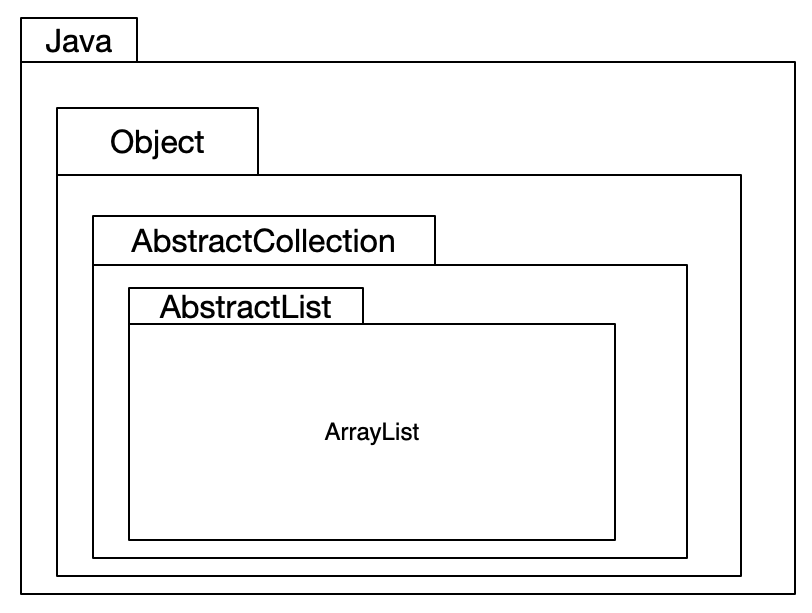 The Universal Modeling Language (UML) is used to create visual documentation of our systems. This can be used to design a system as well as document a system. UML is widely used by software engineers, software developers, and other professionals.Â

I love books from Packt-publishing, every book I bought is easy to read and makes the subject easy to understand 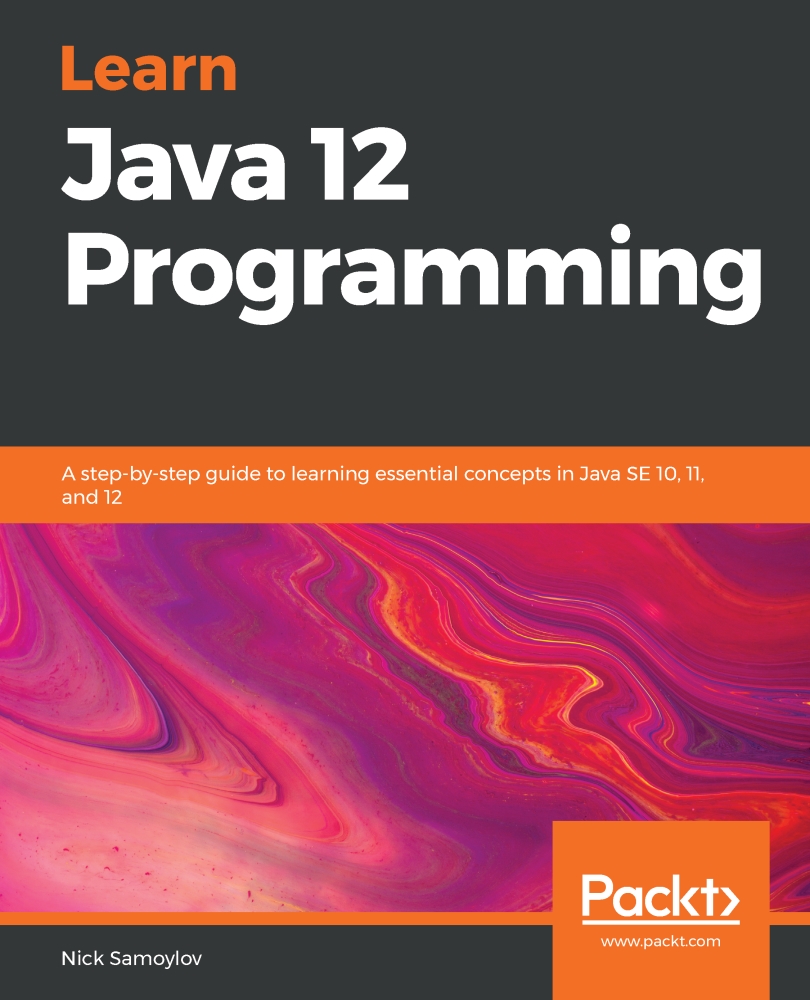 A comprehensive guide to get started with Java and gain insights into major concepts such as object-oriented, functional, and reactive programming

A comprehensive guide to get started with Java and gain insights into major concepts such as object-oriented, functional, and reactive programming 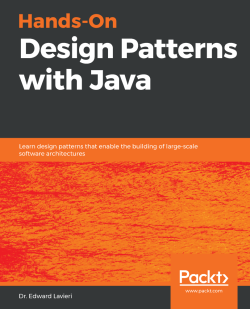