Java is one of the preferred languages among developers, used in everything right from smartphones, and game consoles to even supercomputers, and its new features simply add to the richness of the language. This book on Java programming begins by helping you learn how to install the Java Development Kit. You will then focus on understanding object-oriented programming (OOP), with exclusive insights into concepts like abstraction, encapsulation, inheritance, and polymorphism, which will help you when programming for real-world apps. Next, you’ll cover fundamental programming structures of Java such as data structures and algorithms that will serve as the building blocks for your apps. You will also delve into core programming topics that will assist you with error handling, debugging, and testing your apps. As you progress, you’ll move on to advanced topics such as Java libraries, database management, and network programming, which will hone your skills in building professional-grade apps.

Further on, you’ll understand how to create a graphic user interface using JavaFX and learn to build scalable apps by taking advantage of reactive and functional programming.

By the end of this book, you’ll not only be well versed with Java 10, 11, and 12, but also gain a perspective into the future of this language and software development in general.

The first part of the book brings the reader into the world of Java programming. It starts with basic Java-related definitions and the main terms, walks the reader through the installation of the necessary tools and Java itself, and explains how to run (execute) a Java program and the examples of the code provided with this book.

With the basics in place, we then explain and discuss Object-Oriented Programming (OOP) principles, how Java implements them, and how a programmer can take advantage of them to write high-quality code that is easy to maintain.

The book proceeds by presenting a more detailed view of Java as a language. It explains how the code is organized in packages, defines all the main types, and the list of reserved and restricted keywords. All the discussions are illustrated with specific code examples.

Chapter 1, Getting Started with Java 12

Read more Unlock this book with a 7 day free trial.
About the Author
Bought this book as a present - it was your subscription service which allowed me to look to the book and decide. 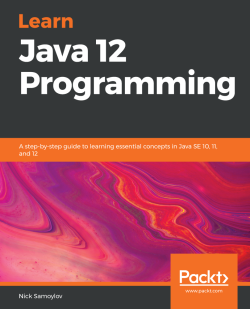