Apple has just announced the biggest thing since Swift, and it is aptly named, SwiftUI. Apple changed the game with the release of Swift 5 years ago. It has helped millions of developers create amazing apps with easy to learn yet powerful clean code. SwiftUI brings that same ideal to the visual side of apps. SwiftUI helps developers by binding their User Interfaces with their data. When the data changes, so does the UI. When the UI changes, so does the data. SwiftUI is also incredibly reusable. Views you create can be reused time and time again. SwiftUI is also baked into the new Xcode 11 and uses Previews to show you in REAL TIME how your code changes will effect the look of your app.

In this course we'll cover:

- SwiftUI for MacOS, WatchOS, and tvOS

All the code and supporting files for this course are available at - https://github.com/PacktPublishing/SwiftUI---Build-Beautiful-Robust-Apps

Continue watching Unlock this video with a 7-day free trial
About the Author
Reliable high quality content at good price. 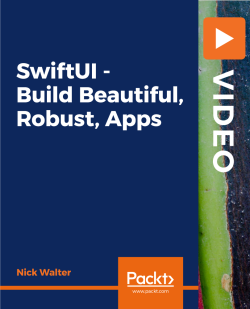