Linux is one of the fastest-growing operating systems around the world, and in the last few years, the Linux kernel has evolved significantly to support a wide variety of embedded devices with its improved subsystems and a lot of new features.

Mastering Linux Device Driver Development provides complete coverage of kernel topics such as video and audio frameworks that usually go unaddressed. You’ll delve into some of the most complex and impactful Linux kernel frameworks, such as PCI, ALSA for SoC, and Video4Linux2, covering expert tips and best practices along the way. In addition to this, you’ll understand how to leverage frameworks like NVMEM and Watchdog. Once the book gets you started with Linux kernel helpers, you’ll gradually progress to working with special device types such as Multi-Function Devices (MFD) followed by video and audio device drivers.

By the end of this book, you’ll be able to write rock-solid device drivers and integrate them with some of the most complex Linux kernel frameworks, including V4L2 and ALSA SoC. 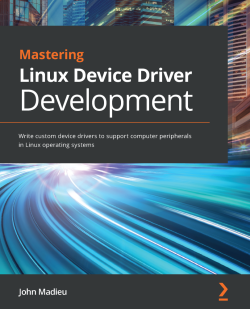 Access this book, plus 8,000 other titles for FREE Expire:
Get all the quality content you’ll ever need to stay ahead with a Packt subscription – access over 8,000 online books and videos on everything in tech
Access now