If you want to learn how to write bash shell scripts like a pro, solve real-world problems, or automate repetitive and complex tasks, read on. By the end of this course you will be able to create bash scripts with ease. You'll learn how to take tedious and repetitious tasks and turn them into programs that will save you time and simplify your life on Linux, Unix, or MAC systems. What you learn in this course can be applied to any shell, however, the focus is on the bash shell and you'll learn some really advanced bash features. Again, whether you're using bash, bourne (sh), KornShell (ksh), C shell (csh), Z shell (zsh), or even the tcsh shell, you'll be able to put what you learn in this course to good use. Also, you'll be able to use these scripts on any Linux environment including Ubuntu, Debian, Linux Mint, RedHat, Fedora, OpenSUSE, Slackware, Kali Linux and more. You're scripts will even run on other operating systems such as Apple's Mac OS X, Oracle's Solaris, IBM's AIX, HP's HP-UX, FreeBSD, NetBSD, and OpenBSD. (Sorry, this course is NOT for Windows scripting or powershell scripting.) 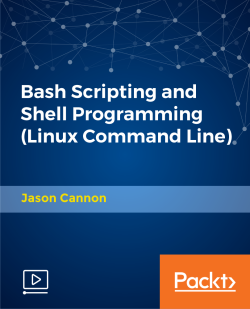 Unlock this video and the full library for FREE Expire:
Get all the quality content you’ll ever need to stay ahead with a Packt subscription – access over 7,500 online books and videos on everything in tech
Start free trial