Beginner game developers are wonderfully optimistic, passionate, and ambitious. But that ambition is often dangerous! Too often, budding indie developers and hobbyists bite off more than they can chew. Some of the most popular games in recent memory – Doodle Jump, Paper Toss, and Canabalt, to name a few – have been fun, simple games that have delighted players and delivered big profits to their creators. This is the perfect climate for new game developers to succeed by creating simple games with Unity.

This book starts you off on the right foot, emphasizing small, simple game ideas and playable projects that you can actually finish. The complexity of the games increases gradually as we progress through the chapters. The chosen examples help you learn a wide variety of game development techniques. With this understanding of Unity and bite-sized bits of programming, you can make your own mark in the game industry by finishing fun, simple games.

Unity 3.x Game Development by Example shows you how to build crucial game elements that you can reuse and re-skin in many different games, using the phenomenal (and free!) Unity 3D game engine. It initiates you into indie game culture by teaching you how to make your own small, simple games using Unity3D and some gentle, easy-to-understand code. It will help you turn a rudimentary keep-up game into a madcap race through hospital hallways to rush a still-beating heart to the transplant ward, program a complete 2D game using Unity's User Interface controls, put a dramatic love story spin on a simple catch game, and turn that around into a classic space shooter with spectacular explosions and "pew" sounds! By the time you're finished, you'll have learned to develop a number of important pieces to create your own games that focus in on that small, singular piece of joy that makes games fun. 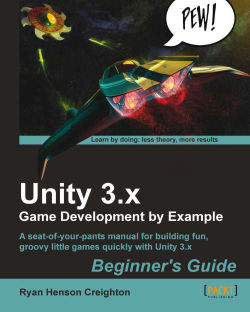