Ubuntu is a Debian-based Linux operating system built on top of the Debian architecture. It is used to make operating systems for multiple platforms, including phones, desktops, TVs and mobiles. It has made some serious progress in the realms of efficiency and user friendliness.

With evolving technology trends, demands on software have changed, with more and more skilled users. Over the past few years, services such as Facebook, Twitter, and push notifications on smartphones mean that users are used to being up to date with everything that happens all the time. With SignalR, the applications stay connected and will generate notifications when something happens either from the system or by other users. This provides new opportunities for the system administrators, to enter this new and exciting world of real-time application development.

This is a concise and a cost-friendly guide, packed with up-to-date essentials on Ubuntu Server fundamentals.

It will guide you through deploying and configuring Ubuntu servers in your office environments. You’ll start by installing Ubuntu Server, then move to the most useful aspect —the command-line interface inside it. You’ll extend your knowledge by learning how to administrate and configure Ubuntu Server. You will also see how to deploy services on Ubuntu Server and find out how to secure it. You’ll get to grips with the virtualization and cloud computing facilities provided by Ubuntu, and finally, you’ll gain some very useful tips.

To reach this goal, we will follow this plan:

Preparation before the installation

In this section, we will take a quick look at the latest Ubuntu Server release news and then, we will make a list of all the system requirements.

Canonical, the company that produces Ubuntu, releases a new version every 6 months. Each release has a code with a YY.ZZ pattern, where YY is the year and ZZ is the month.

I started writing this book just after Ubuntu 15.04 (Vivid Vervet) was released on April 23, 2015. Currently, there are two major releasesâ€”the LTS one that was released last year (LTS stands for long-term support), which is version 14.04, and the latest version 15.04. It is not a big deal if you choose either of these two versions to perform the tasks in the coming chapters, since it will make no difference. So, we decided to use the latest version as a reference for our samples, especially because the next LTS release will be based on it. (Note that only the LTS releases are supported for 5 years by Canonical, and the non-LTS releases have a support of only 9 months. That's why we normally choose the LTS versions for Ubuntu Server deployments.) When there is a notable difference between these two versions, we will mention it.

Now, let's take a look at some information related to the latest version:

The upstart boot still exists under Ubuntu. You can use it by opening the GRUB boot menu, choosing Advanced options for Ubuntu, and then clicking on Ubuntu, with Linux (upstart).

If you would like to switch permanently to the upstart boot, you can install the upstart-sysv package, which will remove ubuntu-standard and systemd-sysv.

System requirements depend on the services that may need to be deployed in the future and installed on the server. For demonstration/test purposes, we need a minimal configuration of 300 MHz CPU, 192 MB of RAM, and a 1.5 GB hard disk. This light configuration allows us to deploy Ubuntu Server on an old computer or even a little virtual machine. This limited footprint is basically due to the absence of the X Windows System (graphic interface), which is not needed in a server environment.

In a production environment, you should be careful about your actual needs in terms of resources (the CPU, RAM, and hard disk) and the estimation growth of those needs. To do this, you need to make a good measure of dimensions based on the services that you are going to deploy.

In the case of the samples in this book, we will use the 64-bit version of Ubuntu Server 15.04, and we will install it on a virtual box machine that has 1 GB of RAM and 2 TB of hard disk.

Note that if you are using a used computer/server, you should back up your data before installing or upgrading Ubuntu. Partitioning tools used in the installation process are reliable and can be used for many years without any problems in general, but sometimes, they can perform catastrophic actions.

This book comprises only the essentials. It contains exactly what you need to know to perform a specific task. If you need more information about and an in-depth understanding of Ubuntu, you can have a look at the official documentation by visiting https://help.ubuntu.com.

You should download the CD image according to your system architecture. The whole list exists at http://releases.ubuntu.com/15.04/.

There is another way to manually install Ubuntu Server, which is via network, but since we will see this procedure in depth in the next Automated installation section, we will not cover it here.

A simple installation from a CD

The procedure for installing Ubuntu from a CD is the same as that for most of the Linux distributions. So, if you are familiar with this, you can save time and move directly to the next section. If you are a newbie in this field, please follow this section closely, since the next sections (advanced installation and automated installation) will be based on this. Note that for Ubuntu Server edition, there is no graphical environment like the one in the desktop edition. So, you will need to use only the keyboard and not the mouse. The stepwise procedure to install Ubunto from CD is as follows:

Upgrading from an old release

In case you have an existing Ubuntu Server and you would like to upgrade it to the newest release, you can use the do-release-upgrade command. This command is a part of the update-manager-core package; it does not have any graphical dependencies and is installed by default.

You can check the options list associated with this command by running the following:

You will find the following options very useful:

The upgrade policy used by the do-release-upgrade tool is defined in the /etc/update-manager/release-upgrades file. The prompt variable at the end of the file indicates whether only the LTS versions will be considered or all the versions (the LTS ones as well as the regular ones) will be searched for when asking for an upgrade. The prompt variable can take as values lts for the LTS versions, normal for all versions, and never to never search for new versions.

You should only use the Prompt=lts mode when you are deploying a version of Ubuntu that is already an LTS. Otherwise, no new version will be detected by do-release-upgrade.

Much of the Ubuntu Server installation process fulfils a majority of user needs, and it is used in the same manner by most of the users (newbie or advanced), but the part that requires much more attention and which is customized by many advanced system administrators depending on their needs is the partitioning step. In this section, we will have a look at how to perform an advanced partitioning for a specific hard disk schema.

The RAID technology (an acronym for Redundant Array of Inexpensive Disks) refers to the techniques used to distribute data across multiple hard drives (creating a storage unit from several hard disks). The unit thus created has an improved fault tolerance (high availability) or a greater performance (the capacity/write speed). The distribution of data on several hard drives allows you to increase the safety and reliability of the associated services.

For more information about this technology, you can take a tour at http://www.tldp.org/HOWTO/Software-RAID-HOWTO.html.

In this section, we will see how to install Ubuntu Server using two RAID1 partitions on two different hard disks, one for the root and the other for Swap:

The installation process will then continue normally.

LVM (Logical Volume Manager) allows the creation and the management of logical volume on Linux. The use of logical volumes somehow replaces the disks' partitioning. This is a much more flexible system as it allows you, for instance, to reduce the size of a file system to expand another one regardless of their location on disks.

For more information about this technology, you can take a tour at http://tldp.org/HOWTO/LVM-HOWTO/.

In this section, we will have a look at the partitioning step of Ubuntu Server installation process with the /srv partition mounted on a LVM volume. This section will be divided into two partsâ€”the first part is during the Ubuntu installation within only one PV (physical volume), which will be a part of the VG (volume group), and the second part will be after the Ubuntu installation. While performing this process, we will demonstrate how to add a second PV to the VG:

Now, we will continue with the second part that started after the Ubuntu Server installation and which covers adding a second hard disk, creating a PV, adding it to the existing VG, extending LV with the srv command, and finally extending the file system. In this part, we will use a second hard disk named /dev/sdb, and we will use it entirely as a PV. You can configure and use as much of PV as you want:

Sometimes, we have a large number of servers to install. In this case, the manual installation will take a lot of time to perform a repetitive task. To solve this problem, there is the automation installation, or what we call the network boot.

For this, we need a machine equipped with a DHCP server and a TFTP server that will provide us the services and configuration files that we need for the system to be installed.

The client computer (our future server) will boot its network interface in the PXE (Preboot Execution Environment) mode. Then, the DHCP present on the network will send it the pxelinux.0 file; this will be explained later. Thus, the client computer accesses the pxelinux.cfg configuration file via TFTP, which contains the necessary information required to launch the installation process.

Let's start with the server installation:

Let's move on to the client configuration. In our case, I used a virtualbox instance to test this kind of installation:

Enjoy watching the server installation if you were doing it locally from a CD.

The PXE installation can be used to install a lot of machines in parallel as well as to install Ubuntu Server on machines without a CD-ROM driver.

The installation process will be entirely automated if you combine the PXE method with a kickstart and/or preseed file. A good starting point for working with kickstart is https://help.ubuntu.com/community/KickstartCompatibility.

Since this book consists of the essentials for the Ubuntu Server, we can't cover topics in depth. Therefore, here are some useful links that will help you go as far as you want in this subject:

In this chapter, we had a look at how to install Ubuntu Server in different modesâ€”manually and automatedâ€”with the help of a simple or an advanced installation.

Now, we can start managing our server, which is the subject that we will cover in the next chapter. 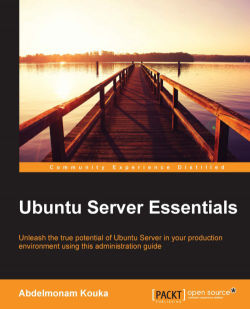