SFML is a cross-platform software development library written in C++ with bindings available for many programming languages. This book contains useful information that you'll need to create any kind of 2D games. Starting with the basics of game programming, resource management, and building simple 2D games, you'll then delve into more complex features such as the physics engine, constructing a game UI, and more advanced concepts of 2D gaming using SFML. You'll develop advanced functionality in your game using the concept of multithreading and learn how various threads interact. In later chapters, you'll quickly grasp the usage and implementation of isometric views and image transformation in your 2D real time tower defense game. You'll wrap up by adding networking and database management systems to your game with SQLite using an ORM.

Through this book, I will try to teach you some elements to build video games using the SFML library. Each chapter will cover a different topic, and will require knowledge from the previous one.

In this first chapter, we will cover basics points needed for the future such as:

Before getting started, let's talk about each technology and why we will use them.

The C++ programming language is a very powerful tool and has really great performance, but it is also really complex, even after years of practice. It allows us to program at both a low and high level. It's useful to make some optimizations on our program such as having the ability to directly manipulate memory. Building software utilizing C++ libraries allows us to work at a higher level and when performance is crucial, at a low level. Moreover, the C/C++ compilers are very efficient at optimizing code. The result is that, right now, C++ is the most powerful language in terms of speed, and thanks to the zero cost abstraction, you are not paying for what you don't use, or for the abstraction you are provided.

I'll try to use this language in a modern way, using the object-oriented approach. Sometimes, I'll bypass this approach to use the C way for optimizations. So do not be shocked to see some "old school code". Moreover, all the main compilers now support the standard language released in 2011, so we can use it everywhere without any trouble. This version adds some really useful features in the language that will be used in this book, such as the following:

SFML stands for Simple and Fast Multimedia Library. This is a framework written in C++ and is based on OpenGL for its graphical rendering part. This name describes its aim pretty well, that is, to have a user-friendly interface (API), to deliver high performance, and to be as portable as possible. The SFML library is divided into five modules, which are compiled in a separated file:

Each module used by our programs will need to be linked to them at compile time. We don't need to link them all if it's not necessary. This book will cover each module, but not all the SFML classes. I recommend you take a look at the SFML documentation at http://www.sfml-dev.org/documentation.php, as it's very interesting and complete. Every module and class is well described in different sections.

Now that the main technologies have been presented, let's install all that we need to use them.

Installation of a C++11 compiler

As mentioned previously, we will use C++11, so we need a compiler for it. For each operating system, there are several options; choose the one you prefer.

If you are a Linux user, you probably already have GCC/G++ installed. In this case, check whether your version is 4.8 or later. Otherwise, you can install GCC/G++ (version 4.8+) or Clang (version 3.4+) using your favorite packet manager. Under Debian based distribution (such as Ubuntu and Mint), use the command line:

Finally, if you are a Windows user, you can use Visual Studio (2013), Mingw-gcc (4.8+), or Clang (3.4+) by downloading them. I suggest you not use Visual Studio, because it's not 100 percent standard compliant, even for the C99, and instead use another IDE such as Code::Blocks (see the following paragraph).

I assume that in both cases, you have been able to install a compiler and configure your system to use it (by adding it to the system path). If you have not been able to do this, another solution is to install an IDE like Code::Blocks, which has the advantage of being installed with a default compiler, is compatible with C++11, and doesn't require any system configuration.

I will choose the IDE option with Code::Blocks for the rest of the book, because it does not depend on a specific operating system and everyone will be able to navigate. You can download it at http://www.codeblocks.org/downloads/26. The installation is really easy; you just have to follow the wizard.

CMake is a really useful tool that manages the build process in any operating system and in a compiler-independent manner. This configuration is really simple. We will need it to build the SFML (if you choose this installation solution) and to build all the future projects of this book. Using CMake gives us a cross-platform solution. We will need version 2.8 or later of CMake. Currently, the last stable version is 3.0.2.

If you use a Linux system, you can install CMake and its GUI using your packet manager. For example, under Debian, use this command line:

For other operating systems

You can download the CMake binary for your system at http://www.cmake.org/download/. Follow the wizard, and that's it. CMake is now installed and ready to be used.

There are two ways to get the SFML library. The easier way is to download the prebuilt version, which can be found at http://sfml-dev.org/download/sfml/2.2/, but ensure that the version you download is compatible with your compiler.

The second option is to compile the library yourself. This option is preferable to the previous one to avoid any trouble.

Compiling SFML is not as difficult as we might think, and is within the reach of everyone. First of all, we will need to install some dependencies.

SFML depends on a few libraries. Before starting to compile it, make sure that you have all the dependencies installed along with their development files. Here is the list of dependencies:

On Linux, we will need to install the development versions of each of these libraries. The exact names of the packages depend on each distribution, but here is the command line for Debian:

On Windows and Mac OS X, all the needed dependencies are provided directly with SFML, so you don't have to download or install anything. Compilation will work out of the box.

As mentioned previously, the SFML compilation is really simple. We just need to use CMake, by following these steps:

Now the Code::Blocks file is built, and can be found in your build directory. Open it with Code::Blocks and click on the Build button. All the binary files will be built and put in the build/lib directory. At this point, you have several files with an extension that depend on your system. They are as follows:

Each file corresponds to a different SFML module that will be needed to run our future games.

Now it's time to configure our system to be able to find them. All that we need to do is add the build/lib directory to our system path.

To compile in Linux, first open a terminal and run the following command:

The following command will install the binary files under /usr/local/lib/ and the headers files in /usr/local/include/SFML/:

By default, /usr/local/ is in your system path, so no more manipulations are required.

On Windows, you will need to add to your system path, the /build/lib/ directory, as follows:

At this point, your system is configured to find the SFML dll modules.

Now that your system is configured to find the SFML binary files, it's time for us to configure Code::Blocks and finally test whether everything is fine with your fresh installation. To do so, follow these steps:

If everything works correctly, you will have a new window created that has a Hello world! message, as follows: 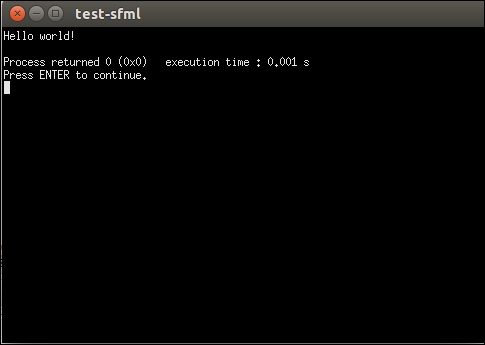 If you have this output, everything is fine. In any other case, make sure you have followed all the steps for the installations.

Now we will configure Code::Blocks to find the SFML library, and ask it to link with our program at the end of the compilation. To do this, perform the following steps:

Now we need to ask the linker which libraries our project needs. All our future SFML projects will need the System, Window, and Graphics modules, so we will add them:

Good news, all the configurations are now finished. We will eventually need to add a library to the linker in the future (audio, network), but that's it.

It's now time for us to test the SFML with a very basic example. This application will show us the window as in the following screenshot: 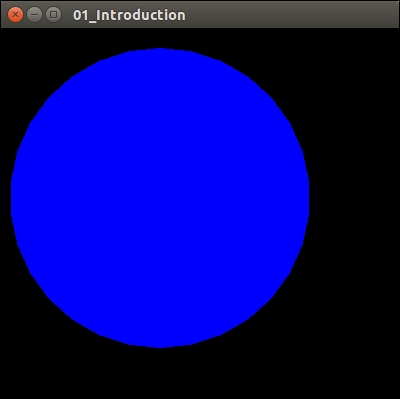 The following code snippet brings about this window:

All that this application does is to create a window with a width and height of 400 pixels and its title is 01_Introduction. Then a blue circle with a radius of 150 pixels is created, and is drawn while the window is open. Finally, the user events are checked on each loop. Here we verify if the close event has been asked (close the button or click Alt + F4), or if the user has pressed the Esc button on his keyboard. In both case, we close the window, that will result to the program exit.

In this chapter we covered which technologies we will use and why to use them. We also learned the installation of the C++11 compiler on different environments, we learned about installing CMake and how this will help us build the SFML projects in this book. Then we installed SFML 2.2, and followed on to build a very basic SFML application.

In the next chapter we will gain knowledge on how to structure a game, manage user inputs, and keep trace of our resources.

this is exactly what i was looking for

this book in some places feel every disjointed, following along with the text is every difficult and which results in guess work most of the time to get the code to compile

Exactly what I wanted from the book. It teaches you multi-threading games, how to use libraries WITH SFML. and teaches good C++11 features 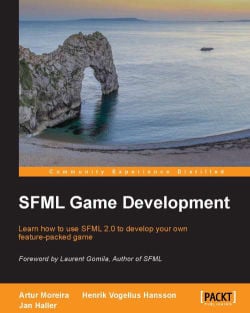 If you’ve got a firm grasp of C++ with a secret hankering to create a great game, this book is for you. Every practical aspect of programming an interactive game world is here – the only real limit is your imagination. 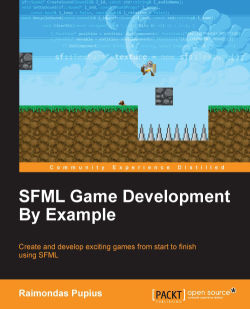 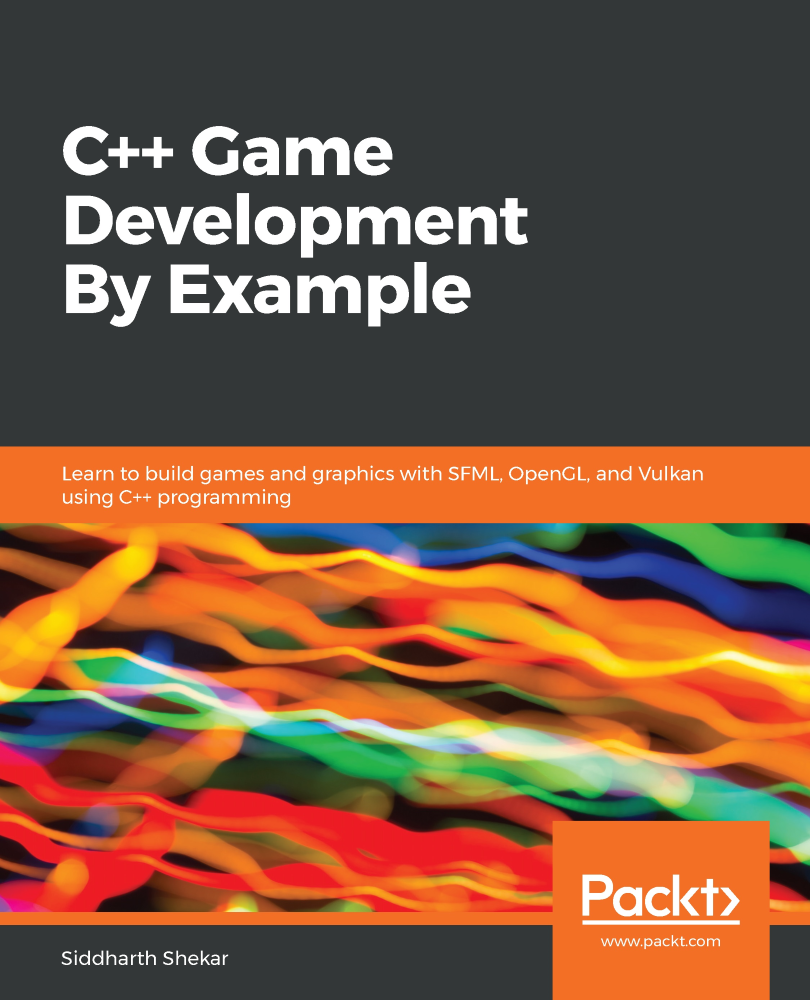 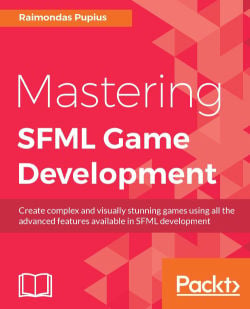 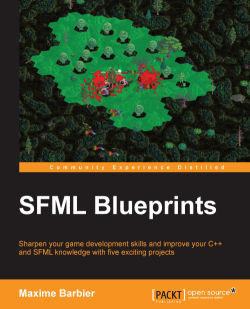