This book starts with giving the reader a walkthrough of TFS and the reporting architecture, guiding you to master the comprehensive reports that are part of Team Foundation Server.

You will explore the Team Project Scenario with work item queries, flat queries, direct link queries, and tree queries. Moving ahead, you will learn about the Excel reporting generation process and how to create ad hoc queries and reports in Microsoft Excel to help manage a team project. Microsoft Excel allows users to connect to the TFS Data and display results as a PivotTable or PivotChart report. Then the book describes each of the standard report dashboards such as SharePoint Dashboard, Project Dashboard, Progress Dashboard, Quality Dashboard, Test Dashboard, Bugs Dashboard, and Build Dashboard. Finally, you will learn how to use the powerful tools available in SQL Server Reporting Services to create and customize robust reports and also learn how to design and customize a dashboard of reports relevant to you.

Team Foundation Server (TFS) is Microsoft's main tool to maintain development projects within the project team. It provides the collaborating platform for a software product. TFS also helps with maintaining source code with check-in/checkout and code review functionalities, building and testing the application, planning and tracking the work of team members, and so on. TFS is available as part of Microsoft's primary development suite, Visual studio. It is available on various Visual Studio editions such as Professional, Premium, Ultimate, and Test Professional. This chapter promotes a basic understanding of TFS, Application Lifecycle Management (ALM), and the TFS 2013 architecture.

TFS is a set of tools and processes that are used to plan, develop, build, test, deploy, and maintain a software product. TFS forms the basis for Microsoft's Application Lifecycle Management (ALM) initiative. It also has a cloud version in Azure named Visual Studio Online (VSO), which is known as TFS Online and has slightly different capabilities. VSO is a hub for project data on cloud, which can be up-and-running in a few minutes without installing and configuring a single server. We can connect to the project on cloud using the Visual Studio Development suite.

TFS ensures that the various software development methodologies and activities of an application include the following:

The main purpose of TFS is to empower a team with easy-to-use methods and tools to develop software solutions. It enhances communication between team members, including developers, testers, the project manager, scrum master, and product owners, but also eases communication for external stakeholders by reporting all kinds of aspects within the development process such as bug reports, the results of testing, maintenance reports, work item reports, and so on. Everything in TFS is done within the context of a team project. The team project is used to maintain the project's development work where members are added and given access through which reports are generated and displayed. The following diagram indicates the connection between the project team and the TFS Server.

TFS provides version control to enable a team to manage and track the source files and documents in a project. It lets you to add not only code files but also documents, to maintain the project's documentation.

TFS version control has the following most useful activities:

Microsoft recommends using version control as early as possible in the project development life cycle. It helps to improve productivity and get rid of difficult problems.

For more information on Version control, have a look at the following links:

For more information on agile process planning, have a look at the following link:

In reality, TFS build server provides a way to define a build, which is then compiled and tested. Build systems help catch bugs and other quality issues during the development period and keep the code validated so that the application performs better.

For more information on the build process, have a look at the following links:

The TFS family has a tool named Microsoft Test Management that is used to store test plans, create test cases, and run these test cases on a regular basis to increase the quality of the software product. It also helps find bugs encountered in an application. Generally, Microsoft Test Manager defines the test plan and manages the test cases for manual or automated tests. As we saw previously, test cases can be run during a build process; test cases are actually stored in a TFS server and closely integrated with every build process throughout the software product life cycle.

For more information on test case management, have a look at the following links:

Reporting is a basic segment in TFS that uses a separate data warehouse to generate the report. Tracking a team's work via reporting using work items, queries, builds, source code, and test results, is mainly used to represent graphical charts in a TFS report. Based on this report, we can make better decisions in order to drive the project seamlessly. There are a number of templates available to create reports. TFS can create custom reports as well. Every report depicts the status of the project, quality of the software, or progress of the project, which in turn results in better management of the software product throughout the team. We will discuss TFS reporting in more detail in later chapters.

Ultimately, TFS is a focal point for the Application Life Cycle Management (ALM). It empowers the development team, project managers, and customers to effectively engage in the development process via a single solution.

Application Life cycle Management (ALM) manages a project's life cycle in order to improve efficiency and reduce risk. It's basically a strategy that describes how to develop the code and work together. Application Lifecycle Management (ALM) is a set of proven practices that are used to manage the development process of the project that can be achieved via the Visual Studio development suite. These are the specific tools that are used to understand the customer's needs, and hence the team can effectively design, implement, and deploy the code.

The latest features of TFS 2013 and VSO empower team members to develop and manage the project that result in the best experience across the platforms. Moreover, additional ALM features help team members become more productive with improved support of agile software development practices. Most businesses require flawless synchronization of data across different ALM tools/solutions without losing focus on the value of a corporate ALM strategy.

Visual Studio Online (VSO) is also an ALM tool hosted in the cloud that has all the features of an on-premise TFS, minus the administration headache associated with an on-premise version.

Using Visual Studio Online (VSO), you can create team projects, choose a process template that suits your project, and perform all the workflows associated with Sprint Planning and Project Management using the Agile methodology. The core capability of TFS 2013 is ALM, which has been evolving through various practices, tools, and processes, as depicted in the following:

TFS 2013 is the first requirement in setting up the environment in order to follow Application Lifecycle Management (ALM) practices and tools. It's designed to integrate all artifacts across the software development life cycle. It simply includes managing the source control and tracking work items that can be everything from requirements to bugs. All these things can be wrapped using process templates such as Scrum, CMMI, or custom ones, as required.

These days, business requirements have been changing to implement the business application from a single server to a hybrid server or completely on-cloud across various devices. The following screenshot represents some of the latest business trends that can be fulfilled via the Application Lifecycle Management (ALM) process:

As we develop software, we get continuous feedback that goes to the project team and supplies insight into improving the project. Along with this, ALM can be broken down in to four major areas: plan, develop, release, and operate, that continuously adds value to the solution, as shown in the following screenshot: 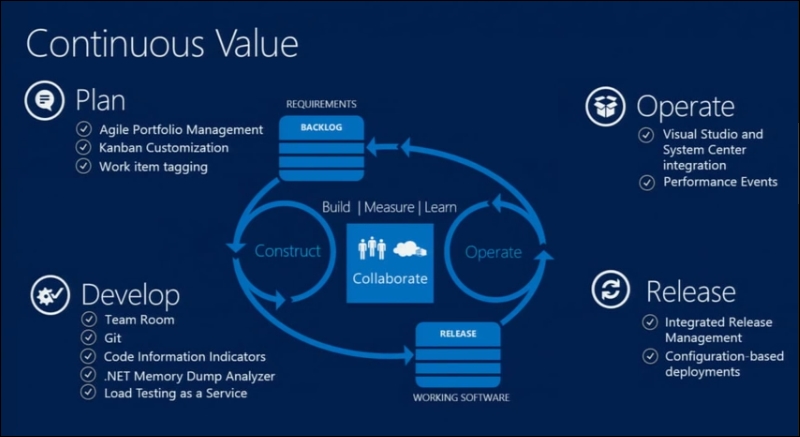 For more information on Application Lifecycle Management (ALM), have a look at the following links:

TFS 2013 is built on multilevel scalable architecture. To set up the TFS environment for the project team, it's very important to figure out the architecture of TFS in order to understand the business need deployment strategy.

TFS can be deployed in three ways:

Based on business requirements, TFS architecture topology can be decided by considering the following:

With TFS on-premises, we can extend the features and functionalities of the Team Foundation by writing the application either on the client side or on the application server. The TFS architecture is mainly divided into 4 parts:

Microsoft also came up with the choice of using Visual Studio Online (VSO), which facilitates all server-side deployments. For example, all source code, work items, build configuration, and team features are hosted on-cloud by Microsoft. This feature immensely simplifies deployment, as we only need to bother with client-side components and Internet access.

In order to access cloud-based TFS, we require a Microsoft account to connect to the service on-cloud using a web browser. Using Visual Studio Online (VSO), we can perform activities such as creating team projects, adding members to the team, and working as you wish, as you do for locally deployed TFS; this is like getting rid of the administering servers. The following screenshot shows the flow of Visual Studio Online (VSO) and Team Project:

In Visual Studio Online (VSO) deployment, the application tier, data tier, and build server are hosted on the cloud via the Microsoft Cloud platform and SQL server Azure technology.

However, there are still arguments for having TFS on-premise and Visual Studio Online (VSO). The following points are the main differences between TFS on-premises and TFS on-cloud:

Team Foundation Server has customizable work items and process templates, enterprise-level reporting, and incredible scalability. Visual Studio Online (VSO) has elastic load testing, Application Insights, and deep integration with Azure. It looks as if enterprises have to choose one or the other, but it's not always true. We can have the advantage of both to add more power to Application Life Cycle Management.

There are various integration tools available for TFS and Visual Studio Online (VSO). All are open source and you can choose one as per your requirements; they are as follows:

For more information on the TFS 2013 architecture, have a look at the following links:

TFS 2013 has a reporting service that you can use to design reports; you can display them on the dashboard in order to show the team's progress in the project's development life cycle. As this book's main focus is on TFS reporting, it's important to understand how data flows in TFS for the reporting service and its architecture.

The reporting service is integrated with a SQL server as it has a separate data warehouse to generate reports. The main component of the TFS reporting architecture are:

The following diagram shows the reporting architecture for TFS 2013: 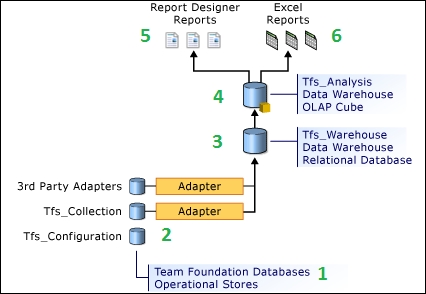 For more information on TFS and Reporting, have a look at the following links:

TFS 2013 offers the following types of report, which we will look at in depth in later chapters:

In this chapter, we reviewed the basics of TFS Architecture and Reporting. We also reviewed the importance of Application Life Cycle Management. In the next chapter, we will emphasize on creating work item reports from queries. 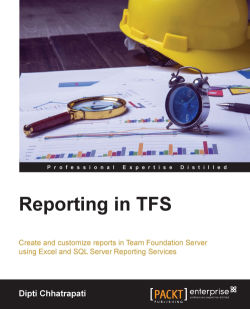