Rails is a rapidly moving, open source, web development framework, and keeping up to speed with it is a big task. You might have already built applications using it, but there have been significant changes in the syntax and semantic of the Rails framework in the latest upgrade.

Rails 4 Application Development Hotshot shows you how to build the most popular types of applications using Rails 4, and highlights new ways to do things. The book also closely follows lots of the best practices, gems, and popular solutions already known to the community, and tracks the changes in these. This book brings new ideas to refactor and restructure code to make it perform better in production, and enables you to write production-ready code.

Food-recipe websites have been in existence since the advent of the Internet. Food.com, thefoodnetwork.com, and bbcgoodfood.com are some of most visited sites. Food is also one of the most popular searched categories on the Internet. Most of these websites have experts writing content for them. In this project, we will develop a website where amateur users can upload their recipes and those recipes can be viewed and shared by others and generated by several users. The recipes can be shared over various social networking sites by the readers.

Our goal is to create a very basic social website where users can sign up and create recipes they know the best. Other users can filter these recipes based on their interests, tastes, and food preferences and share it on Facebook, Twitter, or other social networking sites of their choice. At the end of this project, we should be able to perform the following tasks:

User stories are a very important part of the entire project. They can make or break project schedules and have a drastic effect on the product in the long run. Once defined, our use cases will have steps on how a user interacts with the application and the validations required for it to pass. It will be much easier for us to keep this as a reference while coding. A good specification, both visual and technical, goes a long way in helping developers save time. 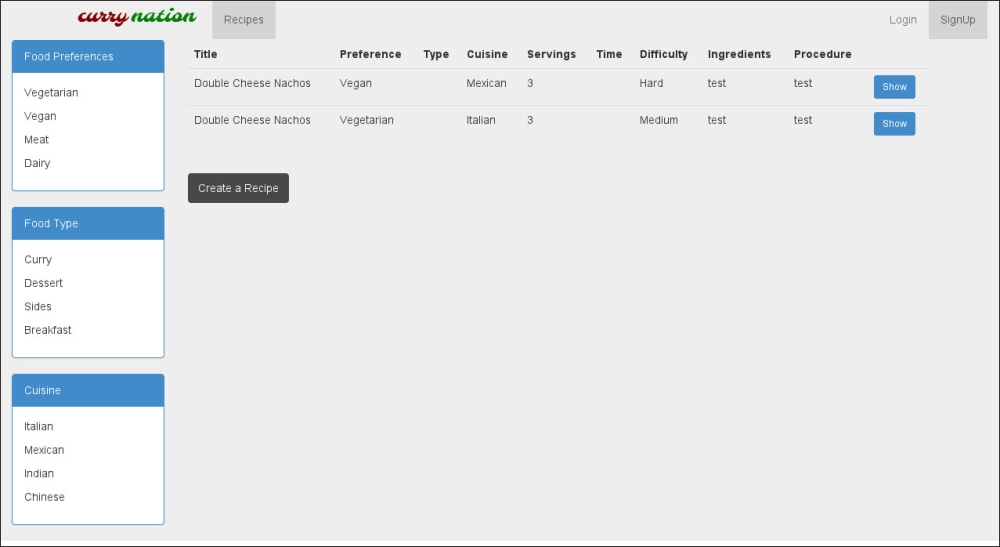 Why is it awesome?

Everyone loves food, and some of us like to cook food too. The simplest and the most interesting way to build momentum for development is with a simple project. We will use this project to lay the foundation of Rails 4 comprehensively and build a base for the upcoming projects. Developers who have been using earlier versions of Rails will get a chance to work with new features in Version 4.0.0. Also, this will set the tone for the rest of the book, in terms of the process we will follow or we should follow while building our applications. We are following a test-driven development approach in the context of Rails 4. So, we will get a fair amount of exposure to the minitest framework, which has been newly introduced, and we will follow it up with some basics of ActiveRecord. While running through this, we will also work with Bootstrap 3.0 to style our views.

While building this application, we will complete the following tasks:

We need the following software installed on the system before we start with our mission:

There are several mockup tools available online and are free to download and install. Balsamiq (https://www.mybalsamiq.com), MockFlow (http://mockflow.com), and mockingbird (https://gomockingbird.com/) are some of the tools that I have explored and are fairly useful. We will use MockFlow for our projects. Sign up and create a free account with MockFlow.

For creating mockups, we will perform the following steps:

As seen in the previous steps, we added various page elements, including text areas, a title, and checkboxes to our page. We can use these page elements to create mockups for all the pages. Mockups for the home page and recipe page are shown in the following two screenshots: 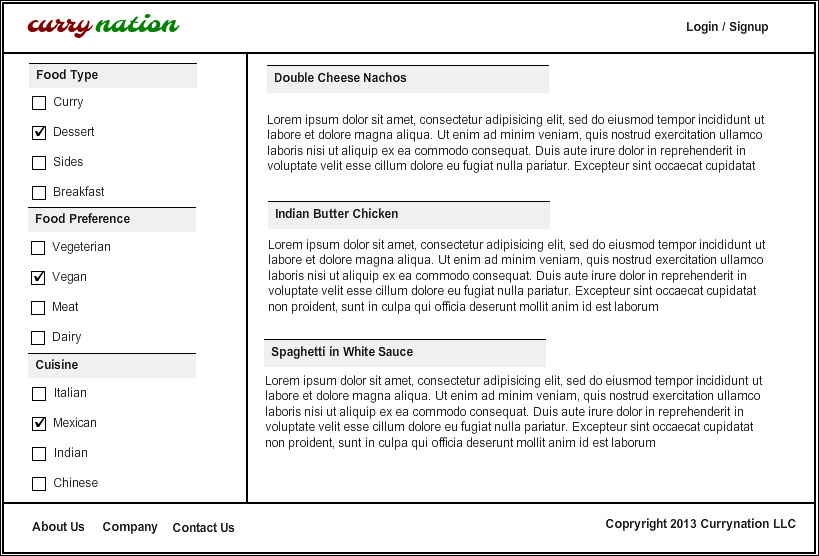 The home page now looks complete with different links and information in the footer shown as follows: 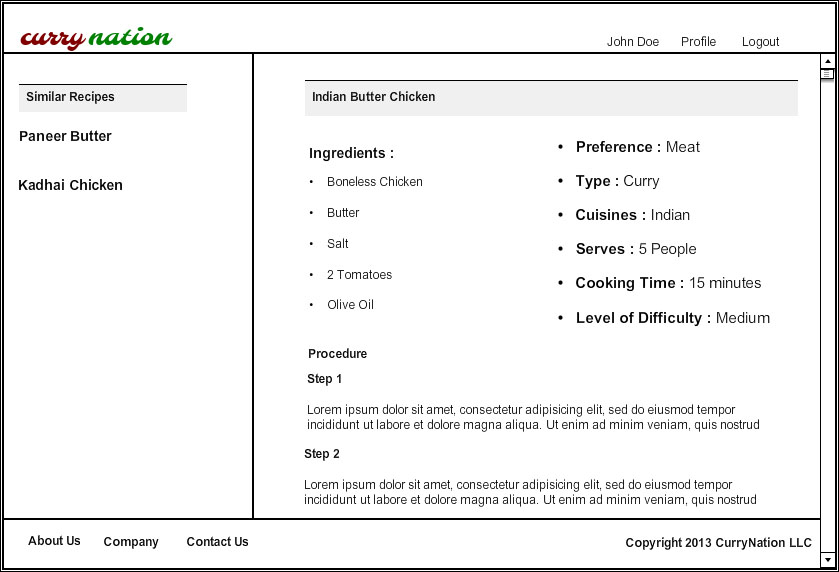 The options offered in MockFlow include building mockups for the following:

Rails does a lot of work for us by providing us with generators, right from a blank application to different parts of the application. The trick lies in using it only when required. Our first application will consider a very simple use case of generators, but we will scarcely use them in subsequent projects. In this task, we will generate our application and write tests before we write the code.

As MySQL and PostgreSQL are the most common RDBMS around, we're going to use either of them for building most of our applications. The default database in the development mode with Rails is SQLite. Make sure you have one of these databases working on your system and also make sure that the connection with Rails is working. We will use MySQL for most of our projects including this one.

The steps for creating a new application and setting up the database (db) are as follows:

As we saw in the previous task, the structure of the default testing framework in Rails 4 includes the respective style folder structure, which is much cleaner and nicely abstracted compared to the earlier versions. This is how it looks:

The test folder is self-descriptive in terms of the folder structure and clearly denotes which test belongs to which part of the system.

Here, we have prepared the test data and written tests that match the specifications. This will help us emulate our functionality. We are now ready to write some code in order to run our tests. The tests in this case failed because there is no code for the tests to run.

Testing is the backbone of your application. If you don't write tests, you are opening a Pandora's box for yourself.

To make the content of the website easily browsable, it makes sense to categorize it in different ways according to the diversity of choice a user has regarding food recipes. In this task, we will build navigation bars that would be visible on the left-hand side. Actually, it goes much deeper than just being the navigation bar. This is because it has to be built in a way that allows us to effectively search for data in future. So, for us, categories are a way to arrange data and make it more accessible, and in this task, we will see how to create categories.

Categories in our application are divided into three parts:

The steps for adding categories are as follows:

The following steps will help us to modify seeds:

We have successfully created category-related models and loaded values to them using seeds. We also saw the best practice for creating seeds so that we can avoid loading duplicate data in the database.

Seeds should be defined for all kinds of default data in the system. Also, the process of adding seeds should be incremental and ongoing. Some might argue that it is very close to fixtures; however, fixtures belong to the test bed, whereas seeds are generic data that should be loaded by default in the system.

Scaffolding is the easiest way to start, but as the word itself suggests, it's just scaffolding. Rails goes much beyond that. Also, whether to use it or not in practical projects is a huge debate. However, I feel that we can use it to start but it's important that we build our functionalities in it. This will provide us with a template that adheres to best practices to start with, and then builds our code upon it.

After successfully writing our tests, we will write our code to make sure our tests run.

At the end of this task, we will be able to create a recipe and add them to categories. However, we have not yet created a real association between them as we discussed earlier. We also saw that we can define arrays and call them directly from our model class like we did in the case of food type, food preferences, and cuisines.

Associations are important in order to pass and access data between the models. ActiveRecord adds one of the major productivity boosts by avoiding writing SQL by hand. In this task, we will define relationships between different models and tell them how they should behave with each other.

We will discuss creating an association between the recipe and category models in this section.

We have successfully set up associations between the models, and they can now be accessed seamlessly between controllers and views.

Right associations are not only important for properly passing data between controllers and models, but also for critical tasks such as searching.

We want legitimate people to post on our website and avoid spam. In order to do so, authentication is a must. In this task, we will see how to use devise to add authentication to the application. The choice of devise is quite obvious because it is a very complete authentication engine in every sense. It is also very easily extensible and hence the best choice for this.

Let's have a look at how can we use devise to add user authentication to our website.

At the end of this task, our application has devise-based authentication for login and sign-up functionalities. We also protected certain methods and made them accessible only after we completed the login process. Lastly, we looked at various methods to pass user data to session objects such as current_user.

Devise also supports OpenLDAP and API methods for extending authentication for our apps on the mobile platform.

Proper styling is equally important as it can make or break your website despite writing all of the code correctly. With a myriad of websites at a user's disposal and so many new user experiences, the user interface takes on a huge role.

We will use Twitter's Bootstrap framework not only for our convenience, but also to ensure good quality code for the markup. The main advantages Bootstrap has to offer are as follows:

Read Bootstrap's Getting started task at http://getbootstrap.com/getting-started/ and get started with Version 3.

In this task, we will see some of the styling classes of Bootstrap and use it to style our application:

We have our completely styled page at the end of this iteration with the help of Bootstrap 3. We will use Bootstrap throughout our book and see many facets of it in the coming applications. However, this is a good start, as the first step in styling always belongs to HTML elements.

Bootstrap 3 uses a flat UI design, which is the latest trend in web designing. Also, it is not backward compatible with earlier versions.

We have created a simple recipe-sharing application by using the default Rails' methods and looked at the basics of testing. Practically, these websites can work like multiuser blogs similar to a WordPress installation, meant only for creating recipes.

Now that we have seen how to create a simple, social recipe-sharing application, it is time to try out some challenges on our own:

It is a great read. Only thing about it is it is a version behind, at least when I got it but still great to read and trying to get it to run with the new version of rails and bootstrap is a great exercise.

Great product and easy to buy.