NGUI is an effective plugin for Unity that gives you the power to create beautiful and complex user interfaces while reducing performance costs. It is a powerful UI system and event notification framework for Unity (both Pro and Free) written in C# featuring clean code and a simple, minimalistic approach to everything. You can create a main menu for your game and add sliders, animations, checkboxes, and popup lists, as well as localize your text.

This is an example-oriented, step-by-step, practical tutorial that will guide you through creating a fully functional main menu along with a 2D game. You will acquire the knowledge to create user interfaces for your existing and future PC or mobile games developed with Unity 3D. The book will start by teaching you the basic functions of the tools and how to create a basic UI. Later in the book, you will also learn how to create a much more complex UI.

This book will start by getting you acquainted with NGUI’s workflow and will then gradually take you through building a complex menu and creating a 2D game.

To achieve this, you will create and configure text labels, sliders, and checkboxes along with drag-and-drop systems. You will be exposed to advanced topics like C# with NGUI, and you will also learn how to build a scrollable viewport. By the end of this book, you will have acquired all the knowledge you need to create UIs with the help of practical steps supported by screenshots.


Chapter 1. Getting Started with NGUI

In this first chapter, we will talk about the overall workflow of NGUI before we import the plugin and create our first UI. Then we will look into the UI's structure, important parameters, and general behavior.

The Next-Gen User Interface kit is a plugin for Unity 3D. It has the great advantage of being easy to use, very powerful, and optimized compared to Unity's built-in GUI system, UnityGUI. Since it is written in C#, it is easily understandable and you may tweak it or add your own features, if necessary.

The NGUI Standard License costs $95. With this, you will have useful example scenes included. I recommend this license to start comfortably—a free evaluation version is available, but it is limited, outdated, and not recommended.

The NGUI Professional License , priced at $200, gives you access to NGUI's GIT repository to access the latest beta features and releases in advance.

A $2000 Site License is available for an unlimited number of developers within the same studio.

Let's have an overview of the main features of this plugin and see how they work.

With Unity's GUI, you must create the entire UI in code by adding lines that display labels, textures, or any other UI element on the screen. These lines have to be written inside a special function, OnGUI(), that is called for every frame. This is no longer necessary; with NGUI, UI elements are simple GameObjects!

You can create widgets—this is what NGUI calls labels, sprites, input fields, and so on—move them, rotate them, and change their dimensions using handles or the Inspector. Copying, pasting, creating prefabs, and every other useful feature of Unity's workflow is also available.

These widgets are viewed by a camera and rendered on a layer that you can specify. Most of the parameters are accessible through Unity's Inspector, and you can see what your UI looks like directly in the Game window, without having to hit the Play button.

Sprites and fonts are all contained in a large texture called atlas. With only a few clicks, you can easily create and edit your atlases. If you don't have any images to create your own UI assets, simple default atlases come with the plugin.

That system means that for a complex UI window composed of different textures and fonts, the same material and texture will be used when rendering. This results in only one draw call for the entire window. This, along with other optimizations, makes NGUI the perfect tool to work on mobile platforms.

NGUI also comes with an easy-to-use event framework that is written in C#. The plugin comes with a large number of additional components that you can attach to GameObjects. These components can perform advanced tasks depending on which events are triggered: hover, click, input, and so on. Therefore, you may enhance your UI experience while keeping it simple to configure. Code less, get more!

NGUI comes with its own localization system, enabling you to easily set up and change your UI's language with the push of a button. All your strings are located in the .txt files: one file per language.

Lighting, normal mapping, and refraction shaders are supported in NGUI, which can give you beautiful results. Clipping is also a shader-controlled feature with NGUI, used for showing or hiding specific areas of your UI.

We've now covered what NGUI's main features are, and how it can be useful to us as a plugin, and now it's time to import it inside Unity.

After buying the product from the Asset Store or getting the evaluation version, you have to download it. Perform the following steps to do so:

The NGUI tray will look like the following screenshot:

You have now successfully imported NGUI to your project. Let's create your first 2D UI.

We will now create our first 2D user interface with NGUI's UI Wizard. This wizard will add all the elements needed for NGUI to work.

Before we continue, please save your scene as Menu.unity.

Create your UI by opening the UI Wizard by navigating to NGUI | Open | UI Wizard from the toolbar. Let's now take a look at the UI Wizard window and its parameters.

You should now have the following pop-up window with two parameters:

The two parameters are as follows:

I recommend that you separate your UI from other usual layers. We should do it as shown in the following steps:

You can now click on the Create Your UI button. Your first 2DUI has been created!

The wizard has created four new GameObjects on the scene for us:

Let's now review each in detail.

The UIRoot component scales widgets down to keep them at a manageable size. It is also responsible for the Scaling Style—it will either scale UI elements to remain pixel perfect or to occupy the same percentage of the screen, depending on the parameters you specify.

Select the UI Root (2D) GameObject in the Hierarchy. It has the UIRoot.cs script attached to it. This script adjusts the scale of the GameObject it's attached to in order to let you specify widget coordinates in pixels, instead of Unity units as shown in the following screenshot:

The UIRoot component has four parameters:

Even though the UI will look the same on different resolutions, the aspect ratio is still a problem since the rescale is based on the screen's height only. If you want to cover both 4:3 and 16:9 screens, your UI should not be too large—try to keep it square. Otherwise, your UI might be cropped on certain screen resolutions.

On the other hand, if you want a 16:9 UI, I recommend you force this aspect ratio only. Let's do it now for this project by performing the following steps:

Now that we have seen the UI Root's different parameters, let's discuss the camera.

Select the Camera GameObject in the Hierarchy view. It has the UICamera.cs script attached to it. This script must be attached to any camera that needs to interact with your UI.

Its purpose is to send different messages concerning events that happen to UI elements such as colliders attached to a button. Some of the more frequently used events are OnClick() and OnHover().

You may have multiple cameras if you consider it necessary; for example, you can have an orthographic camera for 2D in-game UI elements and a separate perspective camera for a 3D pause menu.

For the purpose of this book, we will stick with only one camera.

The UICamera.cs script has a large number of parameters as shown in the following screenshot: 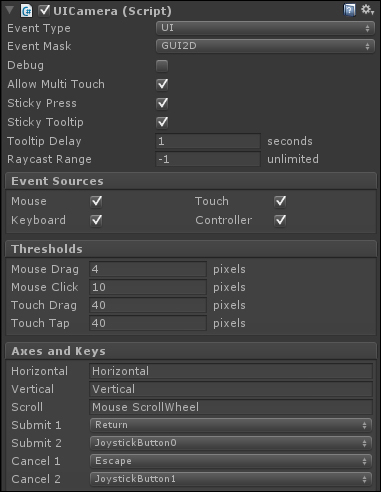 Ok, we have seen what the main parameters of the UICamera component are. We have to see what the camera's anchor child is.

An anchor is used to attach GameObjects to the same area inside the camera view. For example, you can attach them to borders or corners of the screen, or another widget.

Select the Anchor GameObject in the Hierarchy view. It has the UIAnchor component attached to it. It is configured to center content on the screen based on the parent camera.

Before we create widgets, we must understand how these UIAnchor parameters modify their placement behavior.

The UIAnchor component has seven parameters as seen in the following screenshot: 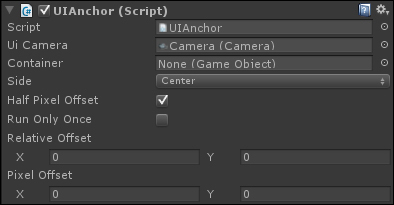 We have explained the different UIAnchor parameters, but what is this last child, Panel? Let's look into that, and we'll be ready to create our first widget!

Select the Panel GameObject in the Hierarchy view. It has a UIPanel component attached.

A panel's purpose is to hold widgets and render geometry in only one draw call. You may create multiple panels to split your UI, but it will add a draw call per new panel.

The UIPanel.cs script has eight parameters as shown in the following screenshot:

During this chapter, we discussed NGUI's basic workflow—it works with GameObjects, uses atlases to combine multiple textures in one large texture, has an event system, can use shaders, and has a localization system.

After importing the NGUI plugin, we created our first 2D UI with the UI Wizard, reviewed its parameters, and created our own GUI 2D layer for our UI to reside on.

Finally, we analyzed the four GameObjects that were created automatically for us by NGUI. After reviewing their parameters, we can summarize their roles as follows:

We are now ready to create our first widget. It's time to move on to the next chapter. 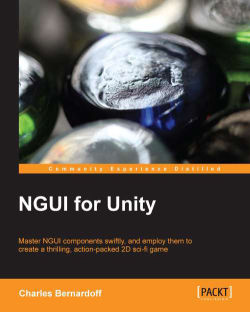