Horizon 6 is VMware's latest end-user computing solution, designed not only to centralize and virtualize desktop environments but also to deliver individual applications securely to any device by means of a virtual workspace.

Your journey starts by investigating an end-user computing project including assessment, pilot, and production. Next, we move into the design phase where we will first take a deeper look at the Horizon 6 solution and its components and how to plan their use in a successful project. Once we have our design and have identified our use cases, we will start to install and configure the core solution. With that in place, we will fine-tune the best end-user experience. Finally, we examine the advanced and enterprise features of Horizon 6, such as VSAN, vCOPS for View, and Horizon Mirage.

VMware Horizon 6 is the foundation of VMware's End User Computing (EUC) solution. It first came to the market 12 years ago, when server virtualization was becoming a more mature and prevalent technology and VMware applied the same principles that it used in server virtualization, and applied them to desktops, by virtualizing and centralizing the management and deployment.

Before we get into discussing product specifics, let's define what we mean when we talk about Virtual Desktop Infrastructure or VDI, and then take a brief stroll down memory lane and look at where and how this started.

What is Virtual Desktop Infrastructure?

When we talk about Virtual Desktop Infrastructure, or VDI as it's more commonly referred to, we typically describe a solution whereby the desktop operating system is hosted as a virtual machine running on a hypervisor that in turn, is part of the data center server infrastructure. This is also sometimes referred to as a Hosted Virtual Desktop (HVD). This is shown in the following diagram:

A user connects to their desktop remotely from a client device (a PC or mobile device) using an optimized delivery protocol and a connection broker. No data leaves the data center but screenshot updates are sent over the network. It's like watching a smart TV with the pictures broadcast to your television from the television studios, rather than the actors performing the show in your lounge, and you interact with the TV via the remote control.

From an architectural perspective, the virtual desktop typically gets built on-demand, bringing together the different components that make up a full desktop. The operating system, user profile, desktop policies, and applications are all treated as separate components, abstracted from the underlying machine, and are then delivered back together to create a user's desktop experience. This is sometimes referred to as a composite desktop and is shown in the following diagram:

VDI sometimes get confused with Server Based Computing (SBC) or Remote Desktop Services (RDS). So what are the differences between these technologies and VDI (if any)?

Let's take SBC/RDS first, as these are the technologies that have probably been around the longest. In fact, you could probably trace these back as far as the 1950s, with the introduction of mainframe technology that was designed to deliver centralized computer power running the applications, with users connecting to the applications using a green-screen-type terminal, which was more or a less just a screen with a keyboard:

As shown in the previous diagram, SBC or RDS is seemingly not that different from VDI. You are connecting to an application that is installed on a server and running in a separate, protected session for each user who connects to it. The difference is that it is hosted on x86-based servers running a multi-user operating system instead of being a separate instance of the operating system. A user would connect to a session via a terminal or thin client. In fact, SBC is sometimes referred to as thin-client computing.

The benefits of deploying VDI

By virtualizing your end-user desktop estate into a centrally managed service, you can deliver benefits not only to the IT administrators, but also to the users. Some of these are detailed as follows:

A brief history of VMware and VDI

The concept of virtualizing Windows desktops or the idea of VDI has been around since as early as 2002, when VMware customers started virtualizing desktop workloads and hosting them on VMware Server and ESX servers in the data center. As there was no concept of a connection broker at that time, customers simply connected using the RDP protocol directly to a dedicated desktop virtual machine running Windows XP.

In early 2006, VMware launched the VDI alliances program with a number of technology vendors, such as Citrix, HP, IBM, Sun, and Wyse Technology, joining this program (http://www.vmware.com/company/news/releases/vdi).

By 2007, the prototype connection broker was introduced to customers to help with the development, before it was given to the VMware product organization to productize it and turn it into a real product. The released product was called Virtual Desktop Manager 1.0 (VDM). The year 2007 was a busy year, and it also saw VMware acquire Propero for $25 million, to accelerate their connection broker development, leading to the VMworld announcement and release of VDM 2.0 in January 2008.

After the release of VDM 2.0 in early 2008, a second release came at the end 2008 along with a new name: VMware View 3.0. This was also the year that Citrix entered the VDI market.

VMware View 4.0 was released in 2009 and was the first version to include the PCoIP protocol from Teradici. PCoIP delivered a much richer user experience than RDP.

In 2010, VMware View 4.5 was released with new features such as local mode (offline desktops), PCoIP enhancements, Windows 7 support, and the ability to tier storage. This was also the year that VMware talked publically about the biggest VDI reference case to date with Bank of Tokyo Mitsubishi, who deployed 50,000 virtual desktop machines. You can read the case study at http://tinyurl.com/oua28bh.

The following year, in 2011, VMware View 4.6 was released with two notable new features. First was the iPad client, which allows a user to connect to their virtual desktop session on an iPad, using the PCoIP protocol. The second new feature was the PCoIP Secure Gateway function for the View Security Server, which allows users to connect to their virtual desktop without needing a VPN connection.

Later the same year, View 5.0 was released with more new features, aimed at improving the end-user experience, the key one being the introduction of Persona Management that allowed a user's profile to be independent from the virtual desktop. When a user logs in via the same profile to any virtual desktop, their profile is delivered on-demand. View 5.0 also introduced 3D graphic support using the latest vSphere 5.0 platform, as well as some major enhancements to the PCoIP protocol.

Although only a point release in May 2012, View 5.1 had a number of significant enhancements, especially around storage, with the introduction of the View Storage Accelerator, View Composer Array Integration, and the ability to scale the hosting infrastructure up to a 32-node cluster when using NFS storage. This version also added Radius two-factor authentication, improved USB device support, a standalone View Composer, and the ability support profile migration from XP to Windows 7 as well as from physical desktops to virtual desktops with Persona Management.

In March 2013, VMware View 5.2 was released, and to bring it in line with VMware's launch of the brand launch of Horizon (launched at the same time), it was renamed to Horizon View 5.2. In this release, there were a number of new features based on end-user experience, such as support for unified communications with Microsoft Lync 2013, hardware-accelerated graphics with Virtual Shared Graphics Acceleration (vSGA), and Windows 8 support. One of the biggest updates came in the form of a feature pack that allowed a user to access their desktop in an HTML 5 browser using the VMware Blast protocol.

A second release, later in 2013 with Horizon View 5.3, saw the introduction of Virtual Dedicated Graphics Acceleration (vDGA) that allowed a virtual desktop to have dedicated access to a GPU in the host. It is also the first release to support Windows Server 2008 R2 as the virtual desktop machine, meaning you can "skin" the operating system to look like a desktop. The main reason for this was that there is no Service Provider License Agreement (SPLA) for Windows 7, so the license agreement doesn't allow you to deploy Windows 7 as a virtual desktop until you purchase a Microsoft Virtual Desktop Access (VDA) license. In this model, you do not require a VDA license per user. The other advantage is that Windows Server 2008 Datacenter Edition allows you to have unlimited virtual machines. It's licensed on a per-CPU model. It's worth noting that we are running the Windows Server operating system as a replacement to the desktop operating system and not as a desktop session.

The final 5.x release arrived in 2014, with Horizon View 5.3.1 adding support for Virtual SAN (VSAN). The timeline is shown pictorially in the following diagram: 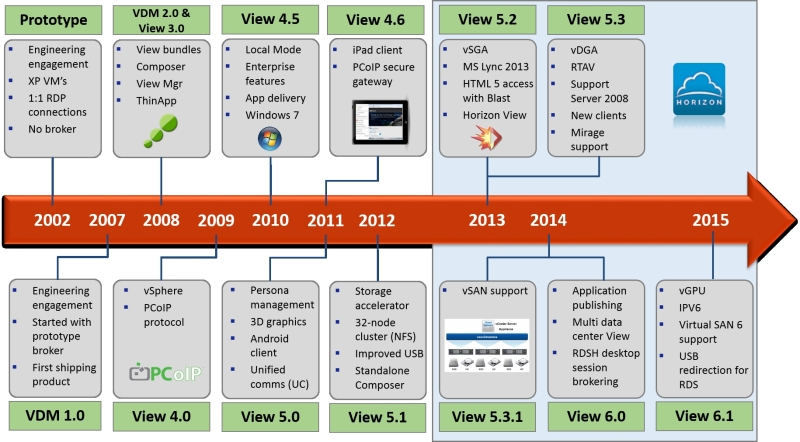 VMware Horizon 6 is the next generation of VMware's EUC vision and strategy to deliver desktop computing environments and publishing applications. In the previous sections, we have discussed some of the differences between VDI and SBC RDS, and the advantages of the two solutions. However, now Horizon 6 offers the ability to deliver VDI desktops, published applications, and session-based desktops from one platform.

Following on from the VMware acquisition of AirWatch, VMware now has two distinct brands:

This book focuses on the brand Horizon, the solution for the delivery of desktops and applications as centralized services.

VMware Horizon 6 was announced on April 9, 2014 with the latest 6.1 version being released on March 12, 2015 and comes packaged in three different editions.

In the next section, we will cover the different product editions for Horizon 6.

There are three different editions within the Horizon 6 portfolio, each with a different theme, with each successive edition adding to the previous edition. The themes are as follows:

The three editions are described in the following section.

With Horizon View Standard Edition, you have the core VDI solution and all of its features, along with the licensing for the hosting infrastructure–vSphere and vCenter for desktop. Also included is ThinApp, VMware's application virtualization/packaging solution, that allows you to extract applications from the underlying OS and deliver them independently.

With Horizon Advanced Edition, the theme is all about application delivery and management. This is the first edition that includes application publishing as part of the View solution; this allows an application running on a Microsoft RDSH back end to be published via the VMware View client using the PCoIP protocol. This feature means that a user can now just have an individual application delivered to their client device rather than on a full-blown desktop.

The final component of Advanced Edition is the inclusion of VSAN for desktops.

Horizon Enterprise Edition builds on the previous two versions and adds features to deliver operations management and automation functionality. This includes vRealize Operations for Horizon and vCenter Orchestrator with a plugin for desktops.

One of the biggest additions to the Enterprise Edition is AppVolumes, which gives you the ability to deliver just-in-time applications to a virtual desktop.

The table in the following screenshot details the features available in each edition: 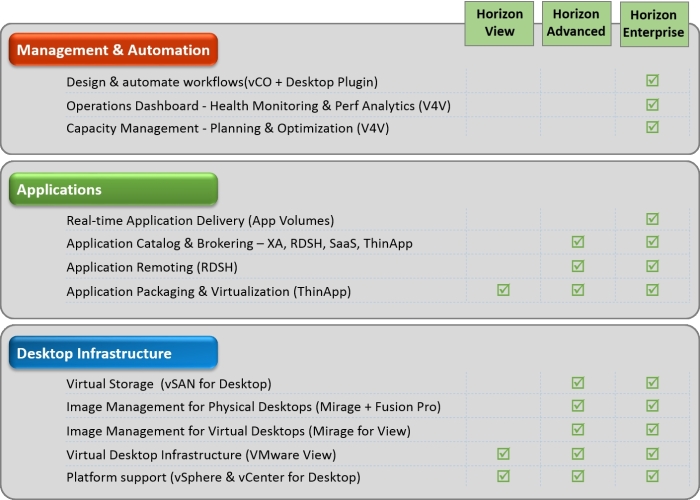 In this book, we will be covering all three of the Horizon 6 editions.

In this chapter, we had a look at what VDI is and covered some of the history of where it all began for VMware, demonstrating that VMware was, and still is, at the forefront of virtual desktop and application delivery.

We then went on to discuss the latest release, VMware Horizon 6.0, and the three different editions that are available, namely: Horizon View, Horizon Advanced, and Horizon Enterprise.

In the next chapter, we will take a deep dive into the technology of View and start looking at the architecture. 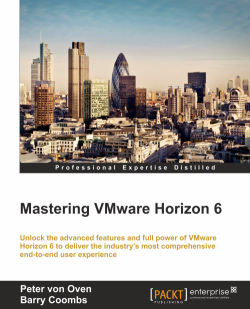