Spring 5.0 is due to arrive with a myriad of new and exciting features that will change the way we’ve used the framework so far. This book will show you this evolution—from solving the problems of testable applications to building distributed applications on the cloud.

The book begins with an insight into the new features in Spring 5.0 and shows you how to build an application using Spring MVC. You will realize how application architectures have evolved from monoliths to those built around microservices. You will then get a thorough understanding of how to build and extend microservices using Spring Boot. You will also understand how to build and deploy Cloud-Native microservices with Spring Cloud. The advanced features of Spring Boot will be illustrated through powerful examples. We will be introduced to a JVM language that’s quickly gaining popularity - Kotlin. Also, we will discuss how to set up a Kotlin project in Eclipse.

By the end of the book, you will be equipped with the knowledge and best practices required to develop microservices with the Spring Framework.

In the relatively young and dynamic world of Java frameworks, a decade is a long time.

This chapter will answer the following questions:

Spring Framework is used to wire enterprise Java applications. The main aim of Spring Framework is to take care of all the technical plumbing that is needed in order to connect the different parts of an application. This allows programmers to focus on the crux of their jobs--writing business logic.

Developing and deploying EJBs was a cumbersome process. While EJBs made the distribution of components easier, developing, unit testing, and deploying them was not easy. The initial versions of EJBs (1.0, 2.0, 2.1) had a complex Application Programmer Interface (API), leading to a perception (and truth in most applications) that the complexity introduced far outweighed the benefits:

Why is Spring Framework popular?

The important reasons behind the popularity of Spring Framework are as follows:

Let's discuss each of these in detail.

Earlier versions of EJBs were very difficult to unit test. In fact, it was difficult to run EJBs outside the container (as of version 2.1). The only way to test them was to deploy them in a container.

The dependency injection enables unit testing by making it easy to replace the dependencies with their mocks. We do not need to deploy the entire application to unit test it.

Before Spring Framework, typical J2EE (or Java EE, as it is called now) applications contained a lot of plumbing code. For example: getting a database connection, exception handling code, transaction management code, logging code, and a lot more.

Let's take a look at a simple example of executing a query using prepared statement:

In the preceding example, there are four lines of business logic and more than 10 lines of plumbing code.

With Spring Framework, the same logic can be applied in a couple of lines:

How does Spring Framework do this magic?

Spring JDBC removes the need to create all the plumbing code involved in getting a connection, creating a prepared statement, and so on. The jdbcTemplate class can be created in the Spring context and injected into the Data Access Object (DAO) class wherever it is needed.

Similar to the preceding example, Spring JMS, Spring AOP, and other Spring modules help in reducing a lot of plumbing code.

Spring Framework lets the programmer focus on the primary job of a programmer-- writing business logic.

Avoiding all the plumbing code also has another great benefit--reduced duplication in code. Since all code for transaction management, exception handling, and so on (typically, all your cross-cutting concerns) is implemented at one place, it is easier to maintain.

Spring Framework is modular. It is built as a set of independent modules built on top of the core Spring modules. Most of the Spring modules are independent--you can use one of them without having to use others.

Let's look at a few examples:

Spring Framework does not want to be the jack-of-all-trades. While focusing on its core job of reducing coupling between different parts of the application and making them testable, Spring provides great integration with frameworks of your choice. This means you have flexibility in your architecture--if you do not want to use a specific framework, you can easily replace it with another.

Keep up with changing times

The first version of Spring Framework focused on making applications testable. However, as time moved on, there were new challenges. Spring Framework managed to evolve and stay ahead of the curve with the flexibility and modules that are offered. A couple of examples are listed as follows:

The following figure shows different Spring modules--organized by the layer of application they are typically used in: 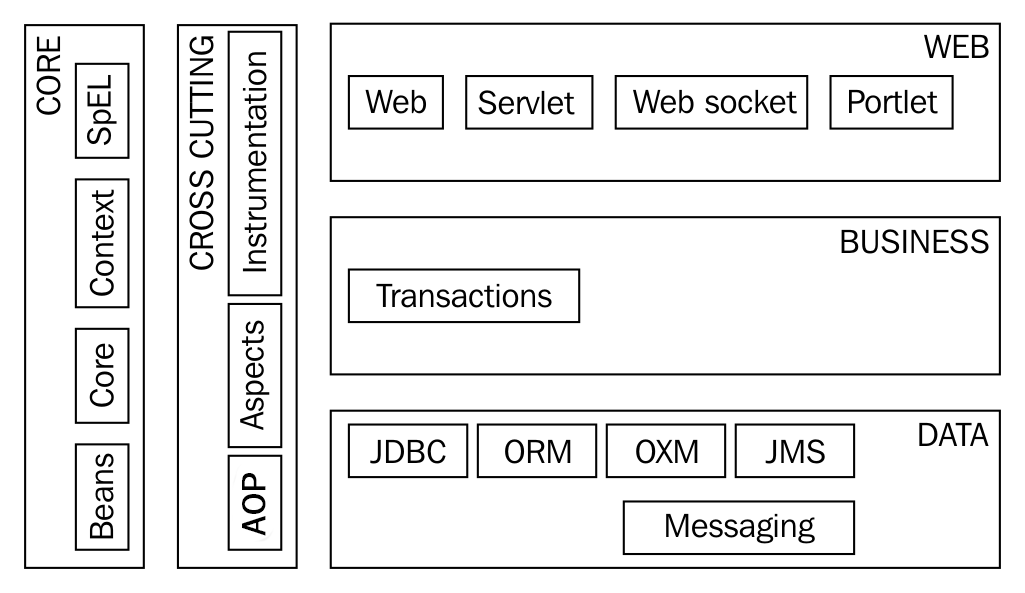 We will start with discussing the Spring Core Container before moving on to other modules grouped by the application layer they are typically used in.

Spring Core Container provides the core features of Spring Framework--dependency injection, IoC (Inversion of Control) container, and the application context. We will learn more about DI and IoC Container in Chapter 2, Dependency Injection.

Important core Spring modules are listed in the following table:

Unit tests and integration tests fit this category since they are applicable to all layers.

Spring provides its own MVC framework, Spring MVC, other than providing great integration with popular web frameworks such as Struts.

Important artifacts/modules are listed as follows:

The data layer in applications typically talks to the database and/or the external interfaces. Some of the important Spring modules related to the data layer are listed in the following table:

While Spring Framework provides the base for core features of enterprise applications (DI, web, data), other Spring Projects explore integration and solutions to other problems in the enterprise space--deployment, Cloud, Big Data, Batch and Security, among others.

Some of the important Spring Projects are listed as follows:

Some of the challenges while developing microservices and web applications are as follows:

Spring Boot solves all these problems out of the box by taking an opinionated view of how applications have to be developed.

We will look at Spring Boot in depth in two chapters--Chapter 5, Building Microservices with Spring Boot and Chapter 7, Advanced Spring Boot Features.

It is not an exaggeration to say The world is moving to the Cloud.

Spring is taking rapid strides toward making application development for the Cloud simpler with Spring Cloud.

We will discuss Spring Cloud and its varied range features in more detail in Chapter 9, Spring Cloud.

There are multiple sources of data in today's world--SQL (relational) and a variety of NOSQL databases. Spring Data tries to provide a consistent data-access approach to all these different kinds of databases.

Spring Data provides integration with a varied range of specifications and/or data stores:

Some of the important features are listed as follows:

We will discuss Spring Data in more detail in Chapter 8, Spring Data.

Important features in Spring Batch are as follows:

Important features in Spring Security are as follows:

We will discuss how to secure web applications with Spring Security in Chapter 3, Building Web Application with Spring MVC.

We will discuss how to secure REST Services with Basic and OAuth authentication mechanisms using Spring Security in Chapter 6, Extending Microservices.

HATEOAS stands for Hypermedia as The Engine of Application State. Though it sounds complex, it is quite a simple concept. Its main aim is to decouple the server (the provider of the service) from the client (the consumer of the service).

The service provider provides the service consumer with information about what other actions can be performed on the resource.

Important features in Spring HATEOAS are as follows:

We will discuss how to use HATEOAS in Chapter 6, Extending Microservices.

Spring Framework 5.0 has JDK 8 and Java EE 7 baseline. Basically, it means that previous JDK and Java EE versions are not supported anymore.

Some of the important baseline Java EE 7 specifications for Spring Framework 5.0 are listed as follows:

Applications using earlier versions of any of the preceding specifications/frameworks need to be upgraded at least to the previously listed versions before they can use Spring Framework 5.0.

Reactive programming is one of the most important features of Spring Framework 5.0.

Microservices architectures are typically built around event-based communication. Applications are built to react to events (or messages).

Reactive programming provides an alternate style of programming focused on building applications that react to events.

A functional web framework can also be used to define more complex routes, as shown in the following example:

A couple of important things to note are as follows:

We will discuss Mono and Flux in more detail in Chapter 11, Reactive Programming.

Until Java 8, the Java platform was not modular. A couple of important problems resulted out of this:

Open System Gateway initiative (OSGi) is one of the initiatives, started way back in 1999, to bring modularity into Java applications.

Each module (referred to as bundle) defines the following:

Each module can have its own life cycle. It can be installed, started, and stopped on its own.

Jigsaw is an initiative under Java Community Process (JCP), started with Java 7, to bring modularity into Java. It has two main aims:

Kotlin is a statically typed JVM language that enables code that is expressive, short, and readable. Spring framework 5.0 has good support for Kotlin.

In fewer than 10 lines of code, we created and tested a data bean with three properties and the following functions:

Kotlin is strongly typed. But there is no need to specify the type of each variable explicitly:

Named arguments allow you to specify the names of arguments when calling methods, resulting in more readable code:

Kotlin makes functional programming simpler by providing default variables (it) and methods such as take, drop, and so on:

You can also specify default values for arguments in Kotlin:

With all its features making the code concise and expressive, we expect Kotlin to be a language to be learned for the .

We will discuss more about Kotlin in Chapter 13, Working with Kotlin in Spring.

If you are using any of the preceding frameworks, it is recommended that you plan a migration and stay with Spring Framework 4.3--which has support until 2019.

The first version of Spring Boot was released in 2014. The following are some of the important updates expected in Spring Boot 2.0:

Minimum supported versions of some important frameworks are listed as follows:

Over the course of the last decade and a half, Spring Framework has dramatically improved the experience of developing Java Enterprise applications. With Spring Framework 5.0, it brings in a lot of features while significantly increasing the baselines.

All of the books i bought are what I am doing on every day basis.

It is a nice book, i would buy again 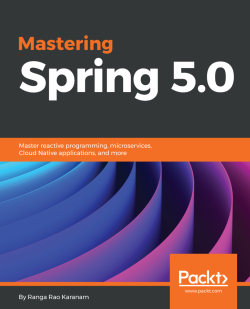