Linux Service Management Made Easy with systemd will provide you with an in-depth understanding of systemd, so that you can set up your servers securely and efficiently.

This is a comprehensive guide for Linux administrators that will help you get the best of systemd, starting with an explanation of the fundamentals of systemd management.

You’ll also learn how to edit and create your own systemd units, which will be particularly helpful if you need to create custom services or timers and add features or security to an existing service.

Next, you'll find out how to analyze and fix boot-up challenges and set system parameters. An overview of cgroups that'll help you control system resource usage for both processes and users will also be covered, alongside a practical demonstration on how cgroups are structured, spotting the differences between cgroups Version 1 and 2, and how to set resource limits on both.

By the end of this Linux book, you’ll be able to efficiently manage all aspects of a server running the systemd init system.

Chapter 1: Understanding the Need for systemd

In this first chapter, we'll first briefly look at the history of Linux init systems. We'll then look at the shortcomings of the legacy init systems and why certain Linux engineers felt the need to develop a new type of init system. Finally, we'll look at the controversy that has surrounded systemd. For easy reference, here's a list of the topics:

So, with the introductory comments out of the way, let's jump in.

The history of Linux init systems

So, what is an init system? Well, init is short for initialization. An init system, then, initializes the operating system upon bootup. After the bootup has completed, the init system will continue working, managing system processes and services. Each system process is assigned a process ID number, or PID. The init process is always PID 1, and every other process that gets started on the system is either a child or a grandchild of the init process.

For many years, the SysV Init system was the primary init system for Linux-based operating systems (SysV is short for System 5. The V is the Roman numeral for 5). SysV init was originally developed by Bell Labs engineers for the Unix operating system, all the way back in the early 1970s. (At that time, I was a young pup in junior high school, and I still had a full head of hair.)

There are actually a few more Linux init systems besides the ones that I'm mentioning here. But these were the most commonly used ones in the pre-systemd days.

SysV init worked well in its day, but it was never perfect. Nowadays, with new high-performance hardware, SysV init has shown both its age and its deficiencies. The first attempt to come up with something better occurred in July 2009, when Ubuntu engineers released the first version of the upstart init system. Although it was better than SysV, it still had its share of problems, especially the early versions which were quite buggy.

The shortcomings of SysV Init and upstart

The first problem with SysV is that of its rather lengthy boot-up times. When you boot up a SysV machine, all of its services have to start up in sequential order. That might not be so bad on a normal desktop machine, but it can be a bit problematic on a server that needs to run lots of services. In that case, each service would have to wait its turn to start, which could take a while.

The next problem with SysV is its complexity. Instead of simple, easy-to-understand configuration files, SysV does everything with complex Bash shell scripts. The init scripts that control system services all have to be assigned a priority number, so that services will start and stop in the proper order. Take, for example, the init script that starts the Apache web server on a CentOS 5 machine. First, we can see that it's a fairly lengthy script, as shown here:

You can see from the wc -l output that it consists of 131 lines. As you can see here, 37 of those lines are comments, which still leaves us with 94 lines of actual code:

Look inside, and you'll see that it's quite complex and convoluted. Here's just the first part of it: 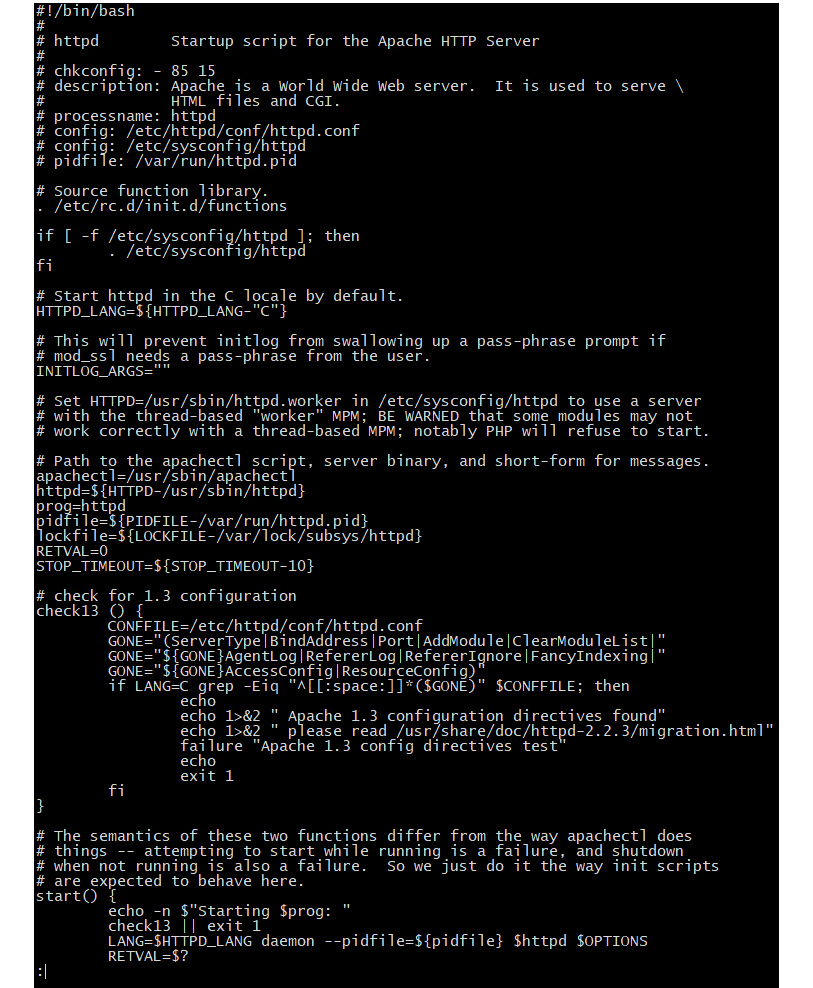 Toward the end of the script, you'll see the code that stops, starts, restarts, and reloads the Apache daemon, as shown here:

Then, there's the problem of inconsistent implementation across the different families of Linux distros. With SysV, there were at least three different methods of implementation. Red Hat-type distros used one method, Debian-type distros used another method, and Slackware-type distros use yet another. For example, the Red Hat way of controlling services required using the service and chkconfig commands. When working with Debian-type systems, I always used to have to look up the service management commands, because I could never remember them. With Slackware, you don't have any service management commands. To enable or disable a service on a Slackware machine, you just set or remove the executable permission from the appropriate init script.

Runlevels were also a source of confusion, because each family of distro had its own set of runlevel definitions. For example, here are the definitions for the graphical runlevel:

So, you can see that this was all quite confusing, especially for anyone who worked in a mixed environment. It should be fairly obvious that we needed something that was a bit less confusing.

As if this weren't enough, there was also the issue of performance. SysV worked well in its day, when computing hardware was more primitive. But, on modern hardware with multiple CPUs that each have multiple cores, we need something a bit more robust. Ubuntu's upstart was supposed to fix this, but it didn't quite live up to its promise. Nowadays, Upstart is completely dead, but there are still some diehards who refuse to give up SysV. In the enterprise, systemd is king.

The advantages of systemd

In contrast to SysV, systemd is really quite simple to configure. For example, look at how short the Apache service file is on a CentOS 7 machine with systemd:

There are only 22 lines, and 5 of those lines are comments, as you can see here:

I'll explain everything in the systemd files later. For now, I just want to show you that a systemd service file is much simpler than a SysV init script. (As we'll soon see in the upcoming chapters, it's easier to learn how to use the systemd directives than it is to learn how to write shell-scripting code for init scripts.)

The next systemd advantage is its consistency. Yes, boys and girls, you no longer have to remember multiple sets of system management commands for multiple families of Linux distros. Instead, you'll now use the same commands on all Linux distros that use systemd. So, this eliminates a major source of frustration for administrators, and for anyone who's studying to take a Linux certification exam.

In contrast to SysV, systemd can start services in parallel, rather than just one at a time in sequence. This makes for much quicker boot-up times than for SysV. Once the machine is booted, performance is more robust than that of SysV.

With systemd, we have a much cleaner way of killing processes. For example, if you needed to use the kill command to forcefully terminate the Apache web server service on a SysV machine, you would only terminate the Apache process itself. If the web server process had spawned any child processes due to running CGI scripts, for example, those processes would continue on for a while longer as zombie processes. But, when you kill a service with systemd, all processes that are associated with that service will also get terminated.

An added bonus is that you can configure systemd service files to control certain aspects of system security. Here are some of the things that you can do:

With all this, you can make systemd somewhat emulate a mandatory access control system, such as SELinux or AppArmor.

All the way around, systemd is much better than any init system that came before it. But it hasn't made everyone happy.

If you've been in the computer world for any length of time, you may have seen that we geeks can get quite passionate about our operating systems. In the early 1990s, I finally replaced my text mode-only 8088 machine with one that could run a graphical interface. I first gave Windows 3.1 a try, and quickly decided that I really hated it. So, I bought a copy of OS/2, which I liked much better and ran for quite a few years on my home-built 486 machine. But, all of my geek buddies at work were big Windows fans, and they kept arguing with me about how much better Windows is. I thought that they were all crazy, and we kept getting into some rather heated arguments.

Then, when I got into Linux, I quickly learned that you don't want to go into any Linux forum and ask which Linux distro is the best for a newbie to start with. All that does is start fights, leaving the poor newbie more confused than ever. And now, the fight is over whether or not systemd is a good thing. Here are some of the objections:

If you look at things objectively, you might see that the objections aren't so bad:

Soon after the release of systemd, some people who had never even tried it put up blog posts that explained why systemd was pure evil and that they would never use it. A few years ago, I created a systemd tutorial playlist on my BeginLinux Guru channel on YouTube. The first video is called Why systemd?. Quite a few people left comments about why they would never use systemd and said that they would change to either a non-systemd Linux distro or to a FreeBSD-type distro in order to avoid it.

The bottom line is this: all enterprise-grade Linux distros now use systemd. So, I think that it might be here to stay.

In this first chapter, we've looked at the history of the most common Linux init systems. We've seen the ways in which the legacy init systems are deficient, and we've seen why systemd is a much better replacement. We wrapped things up by looking at the objections against systemd.

One of the challenges of learning systemd is that, until now, there hasn't been any real comprehensive documentation about it. There's basic usage documentation on the Red Hat website, but it doesn't even cover all components of the systemd ecosystem. There are only two systemd-specific books that I could find, which are a few years old. (One book is specific to Fedora, the other is specific to Ubuntu.) Even those books leave some things out. So, the challenge I've set for myself is to create a comprehensive, hands-on guide for all things systemd. In the chapters that follow, I'll do my best to accomplish that goal.

In the next chapter, we'll go on a quick tour of the systemd directories and files. I'll see you there. 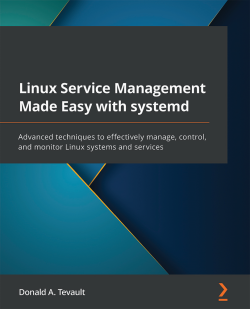