System administrators are responsible for keeping servers and workstations working properly. They perform actions to get a secure, stable, and robust operating system. In order to do that, system administrators perform actions such as monitoring, accounts maintenance, restoring backups, and software installation. All these actions and tasks are crucial to business success.

Data and information are very important so you’ll learn how to create and restore backups. You will also learn about one of the most important points of an operating system: security.

Thanks to "Linux Mint System Administrator’s Beginner’s Guide", you’ll learn all the basics you need to install and keep a robust and reliable Linux Mint operating system up to date.

Welcome to Linux Mint! It's time to discover one of the most amazing operating systems in the World. Linux Mint is not just an operating system. It's a complete open source project supported by hundreds of volunteers.

In this chapter, we're going to cover the following topics:

What are GNU tools? Well, first of all we should learn about the GNU project. Basically, this is an open source project started by Richard Stallman with the goal of building a set of software components and tools to avoid the use of any software that is not free. Although GNU tools are compatible with the UNIX operating system, they are different. In fact, GNU is a recursive acronym that means GNU's Not Unix. Due to the quality and popularity of GNU tools many Unix and Unix-like systems, such as GNU/Linux distros, have adopted these tools as components of the whole operating system. The GNU project has some very popular tools such as bash, Emacs, gzip, automake, gcc, and make.

Despite the fact that "Linux" is an accepted term to refer to this family of operating systems, some people and organizations, such as Free Software Foundation, prefer the name GNU/Linux. Keeping this concept in mind, we're going to use GNU/Linux in this book while talking about the whole operating system, and just Linux while referring to the kernel.

Now that we've learned about Linux kernel, and GNU, we can define Linux Mint as a Linux distribution that includes a Linux kernel plus GNU tools and other useful software. Hold on. We've just mentioned a new concept—distribution . You almost certianly will have heard of Ubuntu, Fedora, or Debian. These three are examples of Linux distributions, or distros. A Linux distribution can be defined as a whole operating system providing a kernel, a system of base tools, and a complete set of applications ready to use.

Clement Lefebvre is a French developer who decided to build a new Linux distro in 2006. His first goal was to experiment and find out if it was possible to apply some design and usability improvements using an existing Linux distro as a base. Before making this decision, Clement spent some time writing articles about other Linux distributions.

Thinking about what could be improved, Clement started to experiment building his own distro. Ubuntu was chosen as the starting point, and after some work, the first Linux Mint version was released in 2006 using Ada as the code name. This version was never released as stable. However, a few months later, a new release was ready. Barbara was the chosen name for the Version 2.0 of Linux Mint, which caught the attention and interest of many developers and users. Their feedback was a motivation to continue working on the new operating system. Linux Mint was starting to become one of the most popular operating systems in the world.

Linux Mint is not just a Linux distribution; it's an open source project supported by hundreds of volunteers and contributors. This means that people work together sharing ideas, writing tutorials, discussing in forums, and developing software. The final result is not only the Linux distro; a lot of documentation is generated as well. Collective intelligence allows us to build one of the most used operating systems in the world. Remember that the Linux Mint operating system is open source, and it's released under the popular General Public License GPL (GNU) software license.

Everyone who contributes to the Mint project makes up the community . In the open source world, a community is a set of users and developers supporting a specific project. The community of Linux Mint grew very quickly to become an important and essential part of the project.

The community uses a specific website that can be found at http://community.linuxmint.com.

Contributing to the project

Everyone can contribute to the Mint project in different ways—that's the magic of open source projects, where the job of each person matters. Usually, people wonder how to contribute to open source projects. Sometimes it's hard to find this kind of information, especially for non-technical people. The Linux Mint website provides enough information about how to contribute to the project. Basically, you can find three different areas of contribution—project contributors, promotion, and financial help. The first area is for those who want to develop software, write documentation, make artwork, or report bugs. However, non-technical people can contribute to this area as well, for instance, they can make translations to get more and more languages supported. The promotion of the project and distro can be for those who are interested in helping others, writing articles, or organizing local presentation for spreading the philosophy and the knowledge of the project. Finally, the financial help is important because the Linux Mint project needs to pay some costs such as hosting or swag stuff.

For more details about how to contribute to the Linux Mint project, please visit http://www.linuxmint.com/getinvolved.php.

Why Linux Mint is different

Basically, there are three features that make Mint different. The most important is the user experience. Mint has been designed to provide a very user-friendly desktop with an elegant and sophisticated look and feel. The main menu gives access to applications organized by groups, and the user can launch programs with just a click. Mint developers have created specific tools, integrated with the operating system, to improve the user experience. Some of them include mintInstall, mintUpdate, mintBackup, and mintUpload. We'll talk about these software tools later in different chapters of this book. The impatient user can take a look at the GitHub account used by Mint developers at https://github.com/linuxmint.

The community behind Linux Mint project is another aspect that makes Mint different than other distros. The organizations and the way they work make Mint different. The feedback provided by users is one of the most valuable resources to improve Mint and to build a better operating system. Other distros have a commercial motivation or developers taking decisions without caring about users' requirements, advices, or ideas.

Finally, Mint includes a lot of software ready to be used out of the box. Multimedia codecs, Java runtime, and Flash Player are installed by default. These features are very important for novice users who need time to get familiarized with the operating system.

As with other operating systems, Linux Mint has different editions. There are essentially two main editions—one based on Debian, which is called Linux Mint Debian Edition (LMDE), and another one based on Ubuntu. In addition to Ubuntu and Debian software repositories, Linux Mint uses its specific ones.

LMDE is a rolling release. This means the distro constantly receives updates without generating releases. So it doesn't need to be upgraded. However, releases for the regular Mint edition (the one based on Ubuntu) are only generated by following a specific period of time, this period being longer than the one used for rolling release. Despite LMDE being faster and more responsive than Linux Mint, non-advanced users should think again before using it because continuous updates can bring some errors that they might find difficult to solve. On the other hand, Linux Mint is easy to maintain and was designed to offer an unbeatable user experience.

The Linux Mint project distributes each edition through different ISO images, which can be burned onto a DVD. For LMDE, we can use four images depending on the desktop environment included and the architecture of the processor (32b and 64b).

Regarding the regular edition of Linux Mint, we have more options for choosing so we need to consider that. Specifically, we can use 10 different ISO images. Well, we only have five that are really different, because each has equivalents in both 32b and 64b. Four different desktop environments are included—MATE, Cinnamon, KDE, and Xfce.

Now that you are familiar with the main data and information regarding the Linux Mint distro and project, you are ready to install the distro in your own computer.

I was not very happy with this particular title. Although the word "beginner" is in the title, I had expected a more thorough treatment of the topic. The coverage was a disappointingly light touch in my opinion. 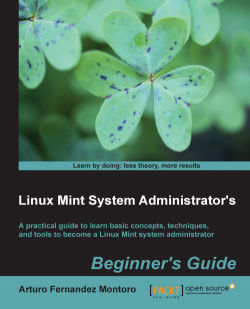