The introduction of the Apple Store has empowered thousands, even millions of people to embrace software development. Using Objective-C and the Xcode IDE, you can produce awesome games and launch them on the Apple Store allowing you to make and sell games quickly and easily.

From learning the basics of Objective-C to deploying to the App Store, you'll use this book to learn about game development in a matter-of-fact, helpful manner. Whether you're new to game development, or just want to learn how to leverage Apple's own tools to expand your skill set, you'll quickly move from a beginner to an expert.

The book kicks off with the basics of game development, and you will take your first steps with using Xcode, the official Apple programming IDE, before moving on to the most important concepts involved in programming games using Objective-C. This book is a hands-on guide to developing the game of your dreams in no time for the Apple Store.


ChapterÂ 1.Â The Environment â€“ Installing and Working with Xcode

In this chapter, you will learn how to download, set up, and install the Xcode development tools and Software Development Kit (SDK). You will also learn what the Xcode IDE is and how you will be using it. This will introduce you to the development environment and the space you will be working on most of the time while you are developing.

Apple requires you to register as an Apple developer first. The registration is free and provides you with access to all of the tools and the iOS SDK required to develop apps for iPhone and iPad. Registering also gives you access to exclusive Apple content such as development videos, guidelines, tutorials, Q&As, and sample code. You will also have access to Apple's developer forums should you run into any questions that can be answered by the developer community. You can register at https://developer.apple.com/register/.

The free tier of Apple registration gives you access to the basic levels of development for Apple products. This limited access allows you to test your game on your computer (simulator) to make your game work, but without the ability to sell your game at the Apple Store.

Registering as an Apple developer

If you are not already an Apple developer, you just have one option available and that is to create an ID. The registration page looks as follows: 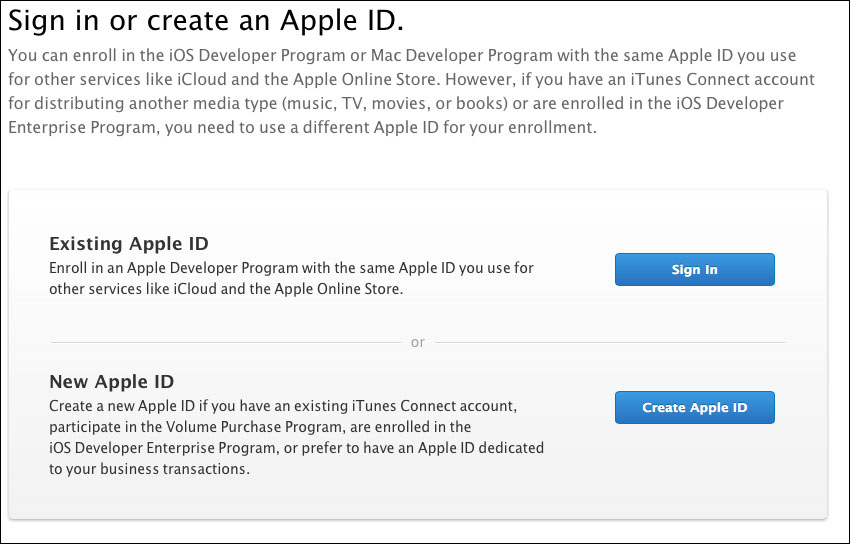 The following are the steps available for you depending on whether you are registered as an Apple developer:

Going a step further and becoming a certified iOS developer is a requirement to release your app or game for iOS devices. In other words, to perform testing on iPhones and iPads, gain access to beta software, or to release products in the Macintosh Apple Store or the iOS Apple Store, you will need to join one of the paid developer programs. You can join either the iOS Developer Program or the Macintosh Developer Program depending on which store you prefer to release from, or join both. It costs 99 USD per year per program, and it offers several resources that are helpful for programming and releasing your apps to the public. It is recommended to sign up for the iOS Developer Program as it will make testing much more realistic, especially when testing anything that has to do with touch.

Registering as an iOS developer 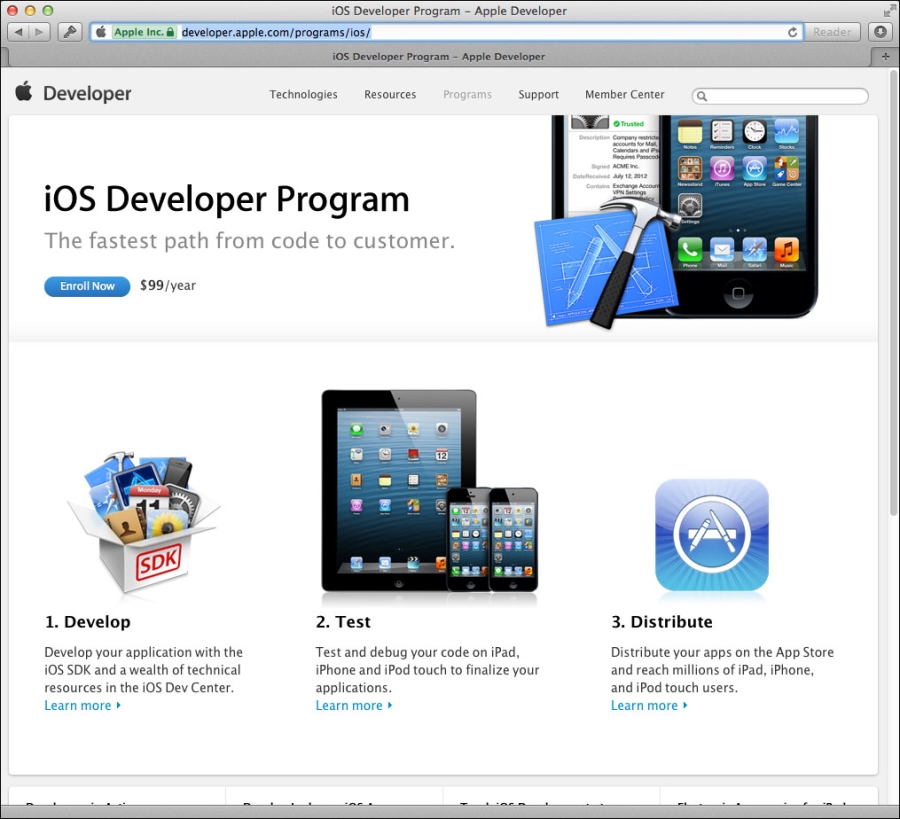 And that's all there is to it; you are now an official iOS developer. You can download the beta software, test on the actual hardware, and distribute your apps to your heart's content.

Once you are registered, you will need to download and install the Xcode developer tools by performing the following steps:

Xcode is Apple's Integrated Development Environment (IDE) for developing for both iOS and Mac OS X. In other words, most of what you will need in order to develop software for the Mac or iOS devices is integrated into one nice, clean application. When you install Xcode on your Mac, you get everything needed to develop for both the Mac and iOS devices. The IDE takes everything from your program and puts it all together into a single executable application; this is referred to as compiling. If you are compiling on your Mac or the iOS simulator, you can run your application once everything is compiled. However, it gets a bit more complicated when compiling for iOS devices, but we will run through that later.

Opening Xcode for the first time

Let's begin by opening the Xcode IDE and explore how to create an app for the first time:

Once you have created your project, you are presented with the Xcode workspace. Most of what you will need to program for the iOS environment is contained within a single development environment: the workspace. The workspace is broken up into several sections, as shown in the following screenshot: 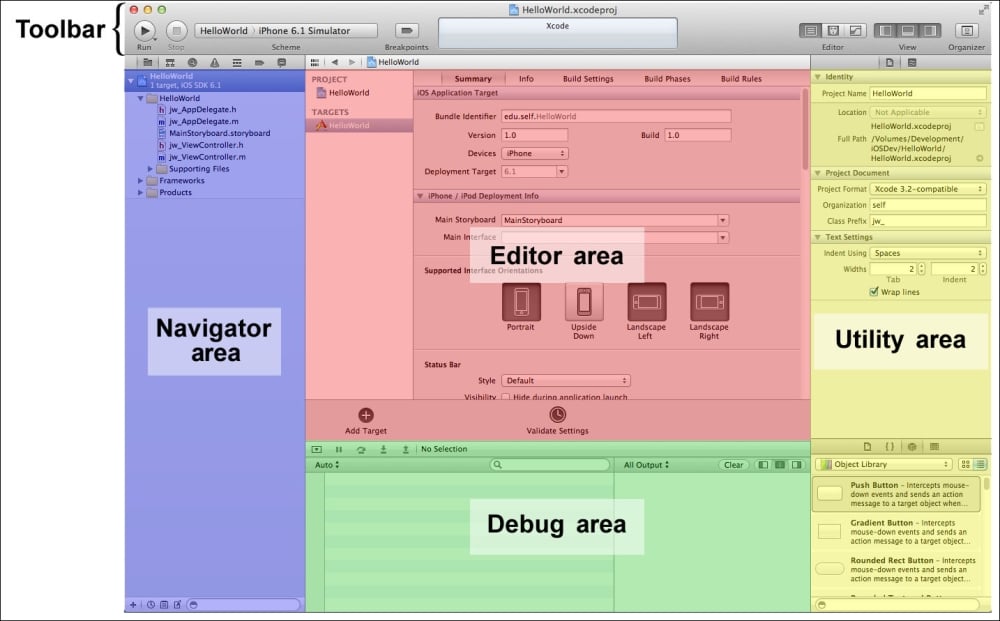 The toolbar rests at the top of your workspace area and stores your frequently used workspace management tools for quick access and reference. Not to state the obvious, but the toolbar is a bar where all of your tools like to live. The following screenshot portrays the toolbar:

Going from left to right, the toolbar contains the following tools.

The Run button can actually change based on the task you are running, but the primary function is to build and run your code. If your code builds correctly, it will run your app and start a debug session.

If you have a running session, the Stop button will activate and allow you to stop the active app and the current session.

A scheme is a collection of targets that your app is set up to build. This pop-up menu allows you to choose which collection you wish to build.

The Activity viewer gives you information on everything going on in your app. If something is wrong with your code, this will be the first place you see a notification. If you do get a warning or alert, you can get detailed information from the issues navigator (see the Navigation area in the screenshot of the workspace).

The View buttons turn on/off the different panes in the workspace window. The Editor area will always be available, but you can turn on/off (in this order) the Navigator, Debugger, and the Utility areas by clicking on the buttons corresponding to their position. 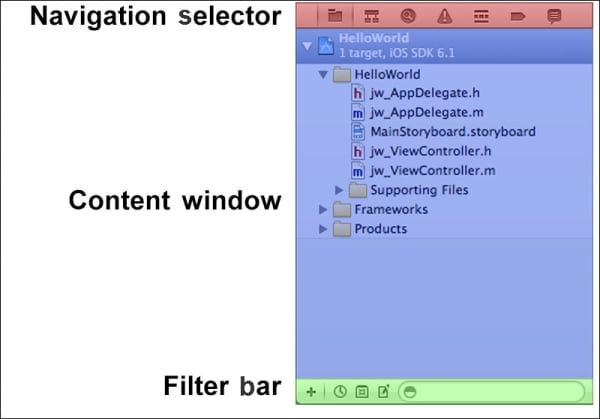 The Navigation selector bar has a series of buttons that you can use to change the data in the Content window:

The Editor area is where most of your development will take place. The type of editor window can be changed in the toolbar using the Editor buttons (see the screenshot of the toolbar). For now, we are going to go through the standard editor window: 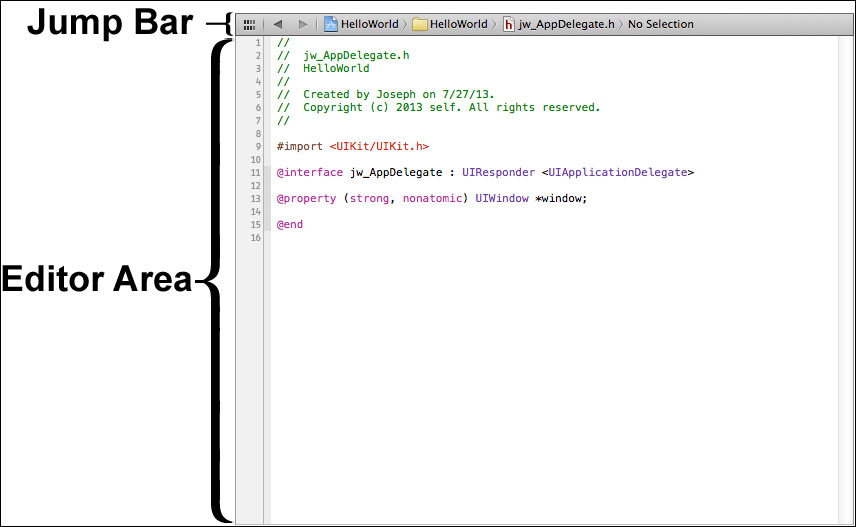 No matter which type of editor you are using, you will have access to a jump bar. There are three items available in the Jump Bar; they are as follows:

The type of editor that will be displayed will depend on what you have selected in the Content window:

The Debugger area of the workspace window is turned off by default, but it can be turned on or off using the middle View button on the toolbar. The Debugger area is used for examining detailed information about your application while it is running. The buttons at the top-left corner of this area are for stepping line-by-line through your code and for viewing what is happening in your code as it runs. The three buttons on the right-hand side of the top bar control what is displayed in the Content window of the Debugger area. The left button is to show your variables, the right is for the console only, and the middle button shows both. We will discuss how this works in greater detail in the debugging section of the book.

The Debugger area can be seen in the following screenshot: 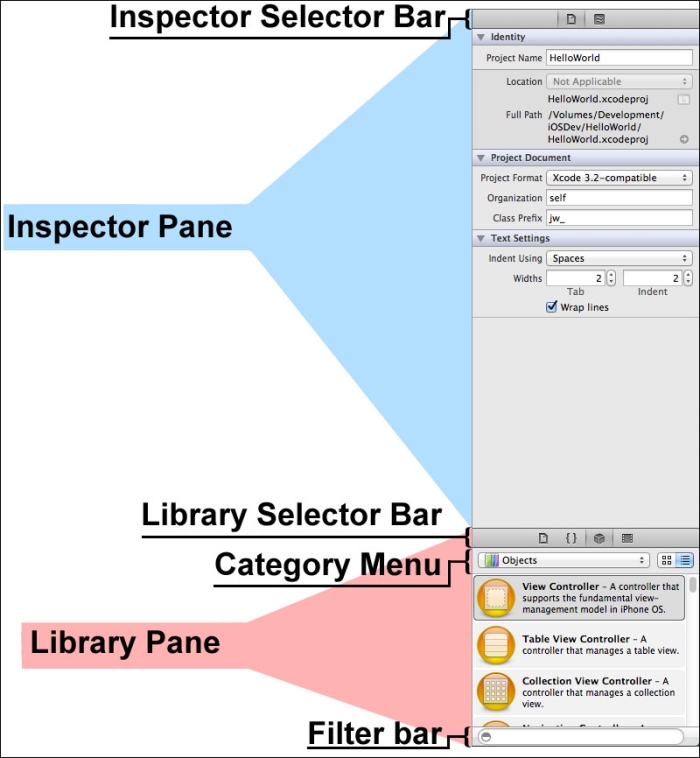 The following are items you will find on the Inspector selector bar:

The following is a list of inspectors that may be available in some editors:

Use the library pane to access libraries of resources that are ready to use in your project:

The iOS Simulator is a standalone app that imitates everything about iOS devices. It saves you a tremendous amount of time by allowing you to run and test your code in a software-based environment before releasing it on the hardware. The iOS Simulator can simulate iPhone and iPad using different versions of the operating system.

The Hardware menu lets you access the simulated hardware and modify it to better suit your needs:

To simulate a touch or gesture, you can use the following mouse clicks and motions:

In this chapter, we covered how to navigate Apple's website to become an Apple developer, download and install Xcode, and the basics of working your way around the Xcode IDE. Everything you learned in this chapter will be referenced throughout the book and you will most likely find yourself back here trying to find out where something in Xcode is located.

In our next chapter, we will introduce you to programming in Xcode and learning the Objective-C language. We will be covering the basics on how to program as well as details on object-oriented programming. 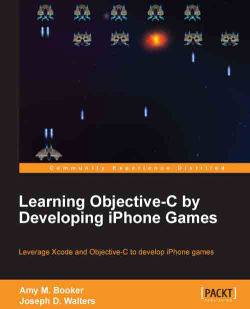