Linux is the one of the most powerful and universally adopted OSes. Shell is a program that gives the user direct interaction with the operating system. Scripts are collections of commands that are stored in a file. The shell can read this file and act on the commands as if they were typed on the keyboard. Shell scripting is used to automate day-to-day administration, and for testing or product development tasks.

This book covers Bash, GNU Bourne Again SHell, preparing you to work in the exciting world of Linux shell scripting. We start with an introduction to the Shell environment and explain basic commands used in Shell. Next we move on to check, kill, and control the execution of processes in Linux OS. Further, we teach you about the filter tools available in Linux and explain standard output and standard errors devices.

Then we will ensure you understand Shell’s interpretation of commands and get a firmer grasp so you use them in practice. Next, you’ll experience some real-world essentials such as debugging and perform Shell arithmetic fluently. Then you’ll take a step ahead and learn new and advanced topics in Shell scripting, such as starting up a system and customizing a Linux system. Finally, you’ll get to understand the capabilities of scripting and learn about Grep, Stream Editor, and Awk.


Chapter 1. Getting Started and Working with Shell Scripting

Whoever works with Linux will come across shell as the first program to work with. The Graphical user interface (GUI) usage has become very popular due to the ease of use. Those who want to take advantage of the power of Linux will use the shell program by default.

Shell is a program which provides the user direct interaction with the operating system. Let's understand the stages in the evolution of the Linux operating system. Linux was developed as a free and open source substitute for UNIX OS. The chronology can be as follows:

Initially, the UNIX OS used a shell program called Bourne Shell. Then eventually, many more shell programs were developed for different flavors of UNIX. The following is brief information about different shells:

A brief comparison of various shells is presented in the following table:

What we see here is that, generally, the syntax of all these shells is 95% similar. In this book, we are going to follow Bash shell programming.

Whenever we type any text in the shell terminal, it is the responsibility of shell to execute the command properly. The activities done by shell are as follows:

We will discuss the preceding topics in the subsequent chapters.

Let's get started by opening the terminal, and we will familiarize ourselves with the Bash Shell environment:

Hereafter, we will use the word Shell to signify the BASH shell only. If we intend any other shell, then it will be specifically mentioned by name such as KORN and similar other shells.

In Linux, filenames in lowercase and uppercase are different; for example, the files Hello and hello are two distinct files. This is unlike Windows, where case does not matter.

As far as possible, avoid using spaces in filenames or directory names such as:

This will make certain utilities or commands fail or not work as expected, for example, the make utility.

While typing in filenames or directory names of the existing files or folders, use the tab completion feature of Linux. This will make working with Linux faster.

If we delete any file from GUI such as Graphical User Interface, then it will be moved to the /home/user/.local/share/Trash/files/ all deleted files folder.

Since we learned basic commands to use Linux OS, we will now write our first Shell script called hello.sh. You can use any editor of your choice such as vi, gedit, nano, and other similar editors. I prefer to use the vi editor.

The #!/bin/bash line is called the shebang line. The combination of the characters # and ! is called the magic number. The shell uses this to call the intended shell such as /bin/bash in this case. This should always be the first line in a Shell script.

The next few lines in the Shell script are self explanatory.

We can execute the newly created file by the following commands:

By running any of the preceding commands, we are adding executable permission to our newly created file. You will learn more about file permissions in later in this same chapter.

By running the preceding command, we are executing hello.sh as the executable file. By technique one, we passed filename as an argument to Bash shell.

Since we have successfully executed our first script, we will proceed to develop a more advanced script, hello1.sh. Please create the new script hello.sh as follows:

You will learn about the LOGNAME, uname, and other similar commands as we go on with the book.

Compiler and interpreter – difference in process

In any program development, the following are the two options:

When we use a compiler-based language, we compile the complete source code, and as a result of compilation, we get a binary executable file. We then execute the binary to check the performance of our program.

On the contrary, when we develop the Shell script, such as an interpreter-based program, every line of the program is input to Bash shell. The lines of Shell script are executed one by one sequentially. Even if the second line of a script has an error, the first line will be executed by the shell interpreter.

When not to use scripts

Shell scripts have certain advantages over compiler-based programs, such as C or C++ language. However, Shell scripting has certain limitations as well.

The following are the advantages:

The following are the limitations of Shell scripts:

We will explore the directory structure in Linux so that it will be useful later on:

Let us learn a few commands, which are required very often, such as man, echo, cat and similar:

The following are the types of permissions:

The following are the commands for changing the file permissions:

To check the file permission, give the following command:

The details of file permissions are as seen in the following image:

We can change the file or directory permissions by the following two ways:

Technique one – the symbolic method

The following command will add the read/write and execute permissions to the file wherein, u is for user, g is for group, and o is for others:

The following command will change the file permissions using the octal technique:

The file permission 777 can be understood as 111 111 111, which corresponds to the rwx.rwx.rwx permissions.

We will see how Linux decides the default permissions of the newly created file or folder:

Another very interesting functionality is the setuid feature. If the setuid bit is set for a script, then the script will always run with the owner's privileges irrespective of which user is running the script. If the administrator wants to run script written by him by other users, then he can set this bit.

Consider either of the following situations:

The file permissions after any of the preceding two commands will be drwsrwxrwx.

Similar to setuid, the setgid functionality gives the user the ability to run scripts with group owner's privileges, even if it is executed by any other user.

File permissions after any of the preceding two commands will be drwxrwsrwtx.

Sticky bit is a very interesting functionality. Let's say, in the administration department there are 10 users. If one folder has been set with sticky bit, then all other users can copy files to that folder. All users can read the files, but only the owner of the respective file can edit or delete the file. Other user can only read but not edit or modify the files if the sticky bit is set.

File permissions after any of the preceding two commands will be drwxrwxrwt.

In this chapter, you learned different ways to write and run Shell scripts. You also learned ways to handle files and directories as well as work with permissions.

In the next chapter, you will learn about process management, job control, and automation.

Easy to understand and comprehend.

Good product and was only $5 at the time, how could I go wrong.

Learning Linux Shell Scripting is an excellent book. Linux basics such as File permissions, different shells and more advanced commands such as grep, awk has been very well explained. 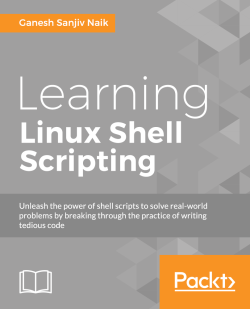