Django, written in Python, is a web application framework designed to build complex web applications quickly without any hassle. It loosely follows the MVC pattern and adheres to the Don't Repeat Yourself principle, which makes a database-driven application efficient and highly scalable, and is by far the most popular and mature Python web framework.

This book is a manual that will help you build a simple yet effective Django web application. It starts by introducing Django, setting it up, and shows you how to code simple programs. You will then learn to build your first Twitter-like app. Later on, you will be introduced to Hashtags, AJAX to enhance the user interface, and tweets. You will then move on to create an administration interface, learn database connectivity, and use third-party libraries. Then you will learn to debug and deploy Django projects, and also get a glimpse of Django with AngularJS and Elasticsearch. By the end of the book, you will be able to leverage the Django framework to develop a fully functional web application with minimal effort.

Welcome to version 2.0 of Development with Django!

Django is a web development framework, and web development is a skill. To master any skill one can follow the famous "10,000 hours" rule, which says that if you practice anything for that amount of time you will certainly become an expert at it. But that's a lot of time, and without a proper plan, this can go wrong. Terribly wrong.

So, is there any better way to achieve your goal? Yes! Break the skill you want to learn into smaller subskills and then master them one at a time. (Programmers call this the "divide and conquer" rule.) You will need to identify the most important subskills by researching them. The more the frequent mentions of the subskill, the more important it becomes to master.

As you have decided to learn a new skill, as the author of this book, I request that you make a commitment, that you will stick with this book in the early frustrating hours. Frustration happens when you are learning a new thing, and trust me on this: when you feel it's too simple, you are doing it right.

Why web development in the first place?

A website makes the first impression about the company or product directly on a global audience. Every startup now has a website, which helps to pitch their idea to their potential clients or investors.

Everything is online now, so instead of just sitting and watching the change, why not participate and learn to code it? Learning web development is one of the most valuable investments you can make with your time. It will not only benefit you by getting you a better job, but you will also be able to code your idea into a prototype in a very simple and straightforward manner.

Must-have ingredients for web development include user interface and user experience, but they are unfortunately out of the scope of this book.

What has changed in web development

Web development has made great progress during the last few years. Some of the improvements are listed as follows:

The MVC pattern in web development

In this book, you will learn about employing a Model-View-Controller (MVC) web framework called Django, which is written in Python, a powerful and popular programming language.

The benefits of this pattern are obvious. With it, designers can work on the interface without worrying about data storage or management. And developers are able to program the logic of data handling without getting into the details of presentation. As a result, the MVC pattern quickly found its way into web languages, and serious web developers started to embrace it over previous techniques.

This book emphasizes on utilizing Django and Python to create a Web 2.0 microblogging web application with many common features found in today's Web 2.0 sites. The book follows a tutorial style to introduce concepts and explain solutions to problems. It is not meant to be a reference manual for Python or Django, for both have plenty of resources already. The book only assumes working knowledge of standard web technologies (HTML and CSS) and the Python programming language. Django, on the other hand, will be explained as we build features throughout the chapters, until we realize our goal of having a working Web 2.0 application.

Django supports multilingual websites through its built-in internationalization system. This can be very valuable for those working on websites with more than one language. The system makes translating the interface a very simple task.

So, to conclude, Django provides a set of integrated and mature components, with excellent documentation, at http://www.djangoproject.com/documentation/.

Thanks to its large community of developers and users, there has never been a better time to start learning a web development framework!

Since the spread of the MVC pattern into web development, and unlike most of the other languages, Python has enjoyed quite a few choices when it comes to web frameworks. Although choosing one from many can be confusing at first, having several competing frameworks can only be a good thing for the Python community.

Django is one of the available frameworks for Python, so the question is: what sets it apart to become the topic of this book?

First of all, Django provides a set of tightly integrated components. All of these components are developed by the Django team itself. Django was originally developed as an in-house framework to manage a series of news-oriented websites. Later, its code was released on the Internet and the Django team continued its development using the open source model. Because of its roots, Django's components were designed for integration, reusability, and speed from the start.

Django's database component, the Object-relational Mapper (ORM), provides a bridge between the data model and the database engine. It supports a large set of database systems, and switching from one engine to another is a matter of changing a configuration file. This gives the developer great flexibility if a decision is made to change from one database engine to another. If you are in trouble, you can find the driver (binary Python package) here: http://www.lfd.uci.edu/~gohlke/pythonlibs/.

Django supports multilingual websites through its built-in internationalization system. This can be very valuable for those working on websites with more than one language. The system makes translating the interface a very simple task.

The standard features expected of a web framework are all available in Django. These include the following:

Even though Django does not provide a JavaScript library to simplify working with Ajax, choosing one and integrating it with Django is a straightforward matter, as we will see in later chapters.

So, to conclude, Django provides a set of integrated and mature components with excellent documentation, thanks to its large community of developers and users. With Django available, there has never been a better time to start learning a web development framework!

We will mention some important reasons why we use Django for better web development. Some of the most important features are explained in the following subsections.

Many corporations are directly using Django in their production and with constant contributions from developers around the world. Some famous sites include Pinterest and Quora. It has established itself as the perfect web development framework.

Tight integration between the component and modular framework

Django is very flexible in terms of its integration with their party module. The chances of there existing a popular project (for example, mongoDB in database domain or SocialAuth in OpenID main) that does have an Appliaction Program Interface (API) or complete plugin for Django integration are very few.

This is one of the most important parts of the Django project. Django's database component, the ORM, provides a bridge between the data model and the database engine. The ORM layer provides features such as encapsulation, portability, safety, and expressiveness to Django's Modal Class, which are mapped to the configured database of choice.

The URL system in Django is very flexible and powerful. It lets you define patterns for the URLs in your application and to define Python functions to handle each pattern.

This enables developers to create URLs that are both human-friendly (avoiding URL ending patterns such as .php, .aspx, and so on) and search engine-friendly.

Django comes with an administration interface that is ready to be used. This interface makes the management of your application's data a breeze. It is also highly flexible and customizable.

With the latest release, version 1.6, Django has brought some major changes and a few of them are as follows:

Django has a great and powerful respect for data. Model the data correctly, and the rest of the site will just fall into place. With the convention that Django was designed for relational database, unofficial NoSQL implementation exists for Django as well. Here is the list of relational databases that Django supports:

In this book, we will mainly deal with three databases from the preceding list, but implementation of others can be almost identical with minimal configuration changes.

There are many famous websites powered by Django. Some of them are as follows:

What you will learn using this book

This book focuses on building a microblogging web application and adding common Web 2.0 features to it. Some of these features are as follows:

Instead of concentrating on teaching various Django features, this book uses a tutorial style to teach how to implement these features using Django. Thus, it works as a complementary resource to the official Django documentation, which is freely available online.

Interested? Great! Prepare for the ride, as I guarantee that it will be both fun and interesting.

In this chapter, we have learned why web development is getting an edge and what has changed in the web technologies domain; how to leverage new web technologies using the Python and Django frameworks; what Django actually is and what we can achieve using it; and finally, the different kind of databases that support Django.

In the next chapter, we will cover the installation of Python and Django on various operating systems, such as Windows, Linux, and Mac, and setting up our first project using the Django platform. 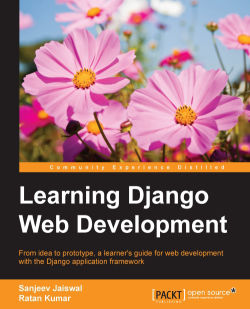