Bayesian Inference provides a unified framework to deal with all sorts of uncertainties when learning patterns form data using machine learning models and use it for predicting future observations. However, learning and implementing Bayesian models is not easy for data science practitioners due to the level of mathematical treatment involved. Also, applying Bayesian methods to real-world problems requires high computational resources. With the recent advances in computation and several open sources packages available in R, Bayesian modeling has become more feasible to use for practical applications today. Therefore, it would be advantageous for all data scientists and engineers to understand Bayesian methods and apply them in their projects to achieve better results.

Learning Bayesian Models with R starts by giving you a comprehensive coverage of the Bayesian Machine Learning models and the R packages that implement them. It begins with an introduction to the fundamentals of probability theory and R programming for those who are new to the subject. Then the book covers some of the important machine learning methods, both supervised and unsupervised learning, implemented using Bayesian Inference and R.

Every chapter begins with a theoretical description of the method explained in a very simple manner. Then, relevant R packages are discussed and some illustrations using data sets from the UCI Machine Learning repository are given. Each chapter ends with some simple exercises for you to get hands-on experience of the concepts and R packages discussed in the chapter.

The last chapters are devoted to the latest development in the field, specifically Deep Learning, which uses a class of Neural Network models that are currently at the frontier of Artificial Intelligence. The book concludes with the application of Bayesian methods on Big Data using the Hadoop and Spark frameworks.

It was Pierre-Simon Laplace who first proposed a formal definition of probability with mathematical rigor. This definition is called the Classical Definition and it states the following:

What this definition means is that, if a random experiment can result in

mutually exclusive and equally likely outcomes, the probability of the event

is the number of occurrences of the event

To illustrate this concept, let us take a simple example of a rolling dice. If the dice is a fair dice, then all the faces will have an equal chance of showing up when the dice is rolled. Then, the probability of each face showing up is 1/6. However, when one rolls the dice 100 times, all the faces will not come in equal proportions of 1/6 due to random fluctuations. The estimate of probability of each face is the number of times the face shows up divided by the number of rolls. As the denominator is very large, this ratio will be close to 1/6.

In the long run, this classical definition treats the probability of an uncertain event as the relative frequency of its occurrence. This is also called a frequentist approach to probability. Although this approach is suitable for a large class of problems, there are cases where this type of approach cannot be used. As an example, consider the following question: Is Pataliputra the name of an ancient city or a king? In such cases, we have a degree of belief in various plausible answers, but it is not based on counts in the outcome of an experiment (in the Sanskrit language Putra means son, therefore some people may believe that Pataliputra is the name of an ancient king in India, but it is a city).

One of the well-known distribution functions is the normal or Gaussian distribution, which is named after Carl Friedrich Gauss, a famous German mathematician and physicist. It is also known by the name bell curve because of its shape. The mathematical form of this distribution is given by:

is the mean or location parameter and

is the standard deviation or scale parameter (

is called variance). The following graphs show what the distribution looks like for different values of location and scale parameters: 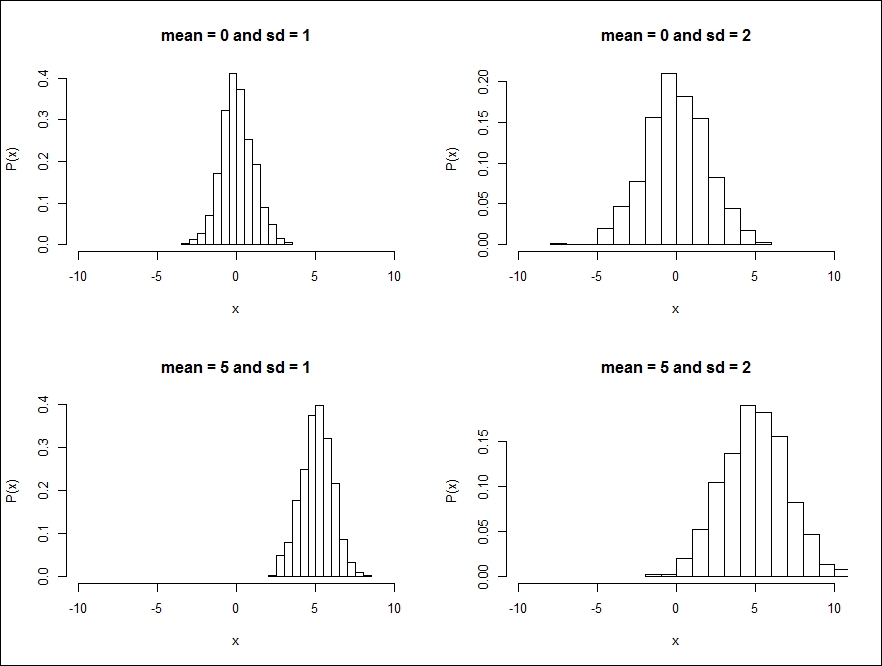 Now, let us look at the multidimensional version of normal distribution. If the random variable is an N-dimensional vector, x is denoted by:

Then, the corresponding normal distribution is given by:

corresponds to the mean (also called location) and

To get a better understanding of the multidimensional normal distribution, let us take the case of two dimensions. In this case,

and the covariance matrix is given by:

are the variances along

is the correlation between

. A plot of two-dimensional normal distribution for

is shown in the following image: 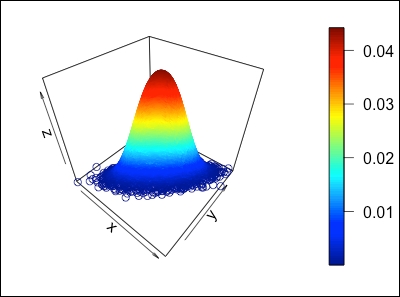 would become diagonal in this case. The following 2D projections of normal distribution for the same values of 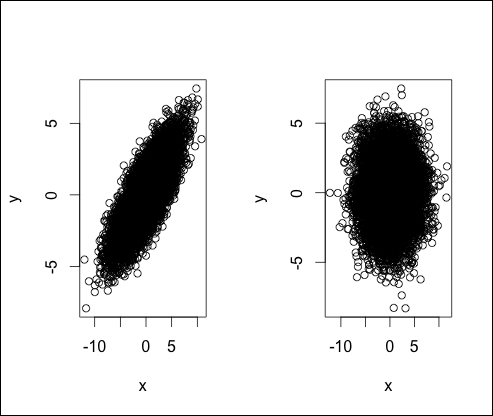 We will briefly review some of the other well-known distributions used in Bayesian inference here. 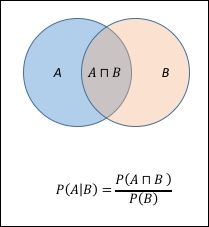 In Bayesian inference, we are interested in conditional probabilities corresponding to multivariate distributions. If

denotes the entire random variable set, then the conditional probability of

is fixed at some value, is given by the ratio of joint probability of

and joint probability of

In the case of two-dimensional normal distribution, the conditional probability of interest is as follows:

It can be shown that (exercise 2 in the Exercises section of this chapter) the RHS can be simplified, resulting in an expression for

in the form of a normal distribution again with the mean

From the definition of the conditional probabilities

, it is easy to show the following:

Rev. Thomas Bayes (1701–1761) used this rule and formulated his famous Bayes theorem that can be interpreted if

represents the initial degree of belief (or prior probability) in the value of a random variable A before observing B; then, its posterior probability or degree of belief after accounted for B will get updated according to the preceding equation. So, the Bayesian inference essentially corresponds to updating beliefs about an uncertain system after having made some observations about it. In the sense, this is also how we human beings learn about the world. For example, before we visit a new city, we will have certain prior knowledge about the place after reading from books or on the Web.

However, soon after we reach the place, this belief will get updated based on our initial experience of the place. We continuously update the belief as we explore the new city more and more. We will describe Bayesian inference more in detail in Chapter 3, Introducing Bayesian Inference.

In many situations, we are interested only in the probability distribution of a subset of random variables. For example, in the heart disease problem mentioned in the previous section, if we want to infer the probability of people in a population having a heart disease as a function of their age only, we need to integrate out the effect of other random variables such as blood pressure and diabetes. This is called marginalization:

The details of this integration is given as an exercise (exercise 3 in the Exercises section of this chapter).

Having known the distribution of a set of random variables

, what one would be typically interested in for real-life applications is to be able to estimate the average values of these random variables and the correlations between them. These are computed formally using the following expressions:

For example, in the case of two-dimensional normal distribution, if we are interested in finding the correlation between the variables

, it can be formally computed from the joint distribution using the following formula:

denotes the probability of having k heads in n trials. The mean of the binomial distribution is given by np and variance is given by np(1-p). Have a look at the following graphs: 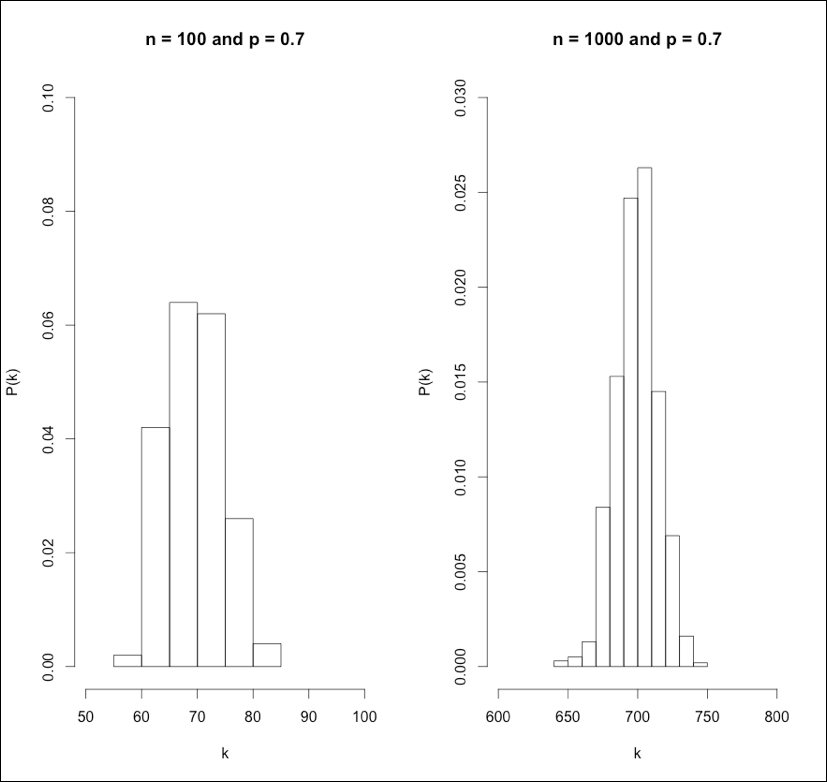 The Beta distribution denoted by

is a function of the power of

are parameters that determine the shape of the distribution function and

is the Beta function given by the ratio of Gamma functions:

The Gamma distribution denoted by

is another common distribution used in Bayesian inference. It is used for modeling the waiting times such as survival rates. Special cases of the Gamma distribution are the well-known Exponential and Chi-Square distributions.

In Bayesian inference, the Gamma distribution is used as a conjugate prior for the inverse of variance of a one-dimensional normal distribution or parameters such as the rate (

) of an exponential or Poisson distribution.

The mathematical form of a Gamma distribution is given by:

are the shape and rate parameters, respectively (both take values greater than zero). There is also a form in terms of the scale parameter

The Dirichlet distribution of order

is defined over an open

The Wishart distribution is a multivariate generalization of the Gamma distribution. It is defined over symmetric non-negative matrix-valued random variables. In Bayesian inference, it is used as the conjugate prior to estimate the distribution of inverse of the covariance matrix

The mathematical definition of the Wishart distribution is as follows:

denotes the determinant of the matrix

is the degrees of freedom.

A special case of the Wishart distribution is when

corresponds to the well-known Chi-Square distribution function with

Wikipedia gives a list of more than 100 useful distributions that are commonly used by statisticians (reference 1 in the Reference section of this chapter). Interested readers should refer to this article.

In the next chapter, we will introduce the R programming language that is the most popular open source framework for data analysis and Bayesian inference in particular.

Read more Unlock this book with a 7 day free trial.
About the Author
This Book was as hoped for thanks 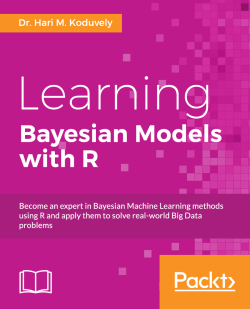