Kali Linux is the most popular distribution dedicated to penetration testing that includes a set of free, open source tools.

This book introduces you to wireless penetration testing and describes how to conduct its various phases. After showing you how to install Kali Linux on your laptop, you will verify the requirements of the wireless adapter and configure it. Next, the book covers the wireless LAN reconnaissance phase, explains the WEP and WPA/WPA2 security protocols and demonstrates practical attacks against them using the tools provided in Kali Linux, Aircrack-ng in particular. You will then discover the advanced and latest attacks targeting access points and wireless clients and learn how to create a professionally written and effective report.

Penetration testing is the process of simulating attacks against a system or a network to point out its misconfigurations, weaknesses, or security vulnerabilities and their relative exploits that could be used by real attackers to gain access to the system or network.

In this book, we are mainly going to focus on external penetration testing.

The process of penetration testing can be divided into four main phases or stages, which are as follows:

A useful guideline for the penetration testing process and methodology that describes these phases in detail is the NIST CSRC SP800-115 Technical Guide to Information Security Testing and Assessment (see the reference section 1.1 of the appendix) at http://csrc.nist.gov/publications/nistpubs/800-115/SP800-115.pdf.

A scheme of the four phases penetration testing methodology is represented in the following diagram, taken from the preceding publication that was just referenced:

We are now going to explore each of the four phases.

In this, we need to consider, for example, the area to scan for wireless networks, the coverage range of the signal of the networks to test, and their size in terms of the number of clients that will supposedly be connected. We also define the objectives of the test, such as specific vulnerabilities that should be assessed and their priorities; whether rogue and hidden access points should be enumerated and whether wireless attacks against clients should be conducted.

The rules of engagement include, among others, the estimated timeline and the days and times when to perform the test, the legal authorization from the client, the format of the report to produce, payment terms, and a nondisclosure agreement clause, according to which the results of the test are kept confidential by the testers.

Worksheets for defining the scope and rules of engagement are available at the links provided with references 1.4 and 1.5 in the appendix (registration to the SANS Institute website is required).

Once the scope and rules of engagement are established, the penetration testing team defines the resources and the tools to employ for test execution.

In the discovery phase, we collect as much information as possible about the networks that are in the scope of the penetration test. This phase is also called the information gathering phase and it is very important because it precisely defines the targets of our test and allows to collect detailed information about them and to expose their potential vulnerabilities.

In particular, for our scope, we would collect information such as:

We will see more about wireless scanning and how to use the wireless scanners included in Kali Linux, such as airmon, airodump, and Kismet, to carry out the discovery phase of wireless penetration testing in Chapter 3, WLAN Reconnaissance.

The attack phase is the most practical part of the penetration testing process, where we try to exploit the vulnerabilities identified in the discovery phase to gain access to the target networks.

This is called the exploitation subphase and in our case could involve attempting to crack authentication keys to connect to the network, setting up rogue and honeypot access points and directly attacking clients to recover the keys. The next stage (if required in the contract) is referred to as post-exploitation and involves attacking the network and the infrastructure after we have gained access to it, for example, taking control of the access points and performing man-in-the-middle attacks against the clients.

It is worth repeating that we should never conduct attacks that are not explicitly required in the contract. Moreover, the attack phase should be performed according to the terms and modalities established with the client, defined in the rules of engagement. For example, if the targets are production systems or networks, we could agree with the client to conduct such attacks outside the working hours, as wireless connectivity and the services provided may be disrupted.

We will cover the attack phase from Chapter 4, WEP Cracking to Chapter 7, Wireless Client Attacks.

Reporting is the final phase of penetration testing. The previous phases are very important because they are where we plan and execute the test but it is still important to communicate its results and findings in an effective manner to the client. The report is useful as a reference point for defining countermeasures and mitigation activities to address the identified vulnerabilities. It is usually formed by two major sections, the executive summary and the technical report.

The executive summary is a high-level summary of the objectives, methods and findings of the test and it is mainly intended for the non-technical management. Thus, the summary should be written in a clear language and using an understandable terminology, avoiding too many technical terms and expressions.

The executive summary should include:

The technical report includes an in-depth description of the penetration test and detailed information about the findings of the discovery and attack phases, as well as an assessment of the risk that the identified vulnerabilities entail for the client and a plan for risk mitigation. Thus, the technical report covers the same as the executive summary but from a technical point of view and it is addressed mainly to IT executives that should then apply the remediation activities provided in the report.

We will cover the reporting phase in Chapter 8, Reporting and Conclusions.

In this chapter, we introduced wireless penetration testing and provided a brief description of the four main phases in which it is divided: planning, discovery, attack, and reporting.

In the next chapter, we will see how to install Kali Linux on your computer and we will examine the requisites that your wireless adapter must meet to get started with wireless penetration testing. 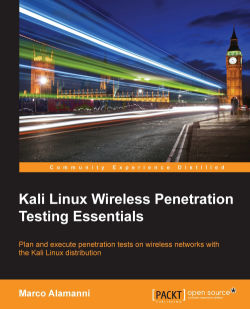