The Internet of Things (IOT) has managed to attract the attention of researchers and tech enthusiasts, since it powerfully combines classical networks with instruments and devices.

In Internet of Things Programming Projects, we unleash the power of Raspberry Pi and Python to create engaging projects. In the first part of the book, you’ll be introduced to the Raspberry Pi, learn how to set it up, and then jump right into Python programming. Then, you’ll dive into real-world computing by creating a“Hello World” app using flash LEDs.

As you make your way through the chapters, you’ll go back to an age when analog needle meters ruled the world of data display. You’ll learn to retrieve weather data from a web service and display it on an analog needle meter, and build a home security system using the Raspberry Pi. The next project has a modern twist, where we employ the Raspberry Pi to send a signal to a web service that will send you a text when someone is at the door. In the final project, you take what you've learned from the previous two projects and create an IoT robot car that you can use to monitor what your pets are up to when you are away.

By the end of this book, you will be well versed in almost every possible way to make your IoT projects stand out.

The Raspberry Pi is marketed as a small and affordable computer that you can use to learn programming. At least that was its initial goal. As we will see in this book, it is much more than that. 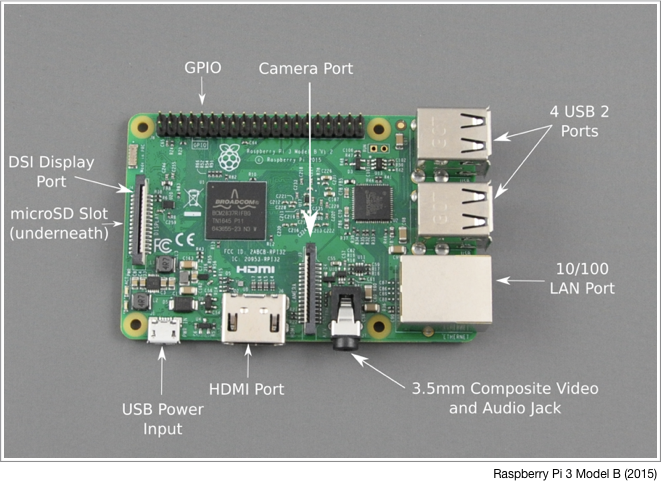 This version of the Raspberry Pi features the following parts:

The Raspberry Pi Zero was released in November of 2015. Here is an image of it: 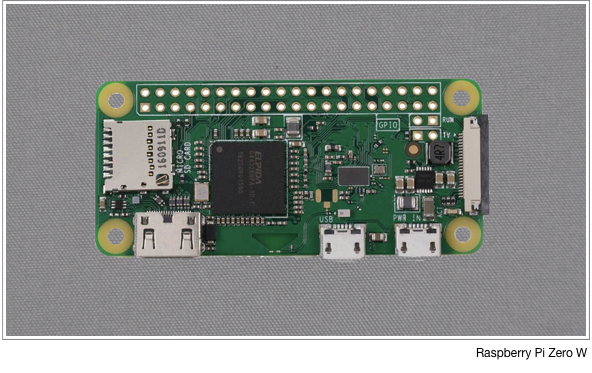 Although not as powerful as the previous Raspberry Pis, the Zero featured a smaller size (65 mm X 30 mm), perfect for projects with limited physical space (namely, wearable projects). Plus, the Raspberry Pi zero was priced at $5 USD, making it very affordable. The Raspberry Pi zero W was released on February 28, 2017 at double the price ($10 USD) with built-in Wi-Fi and Bluetooth capabilities.

The latest model, as of the time of writing, is the Raspberry Pi 3 B+, which was released on March 14, 2018. The processor speed has been upgraded to 1.4 GHz as well as the wireless LAN now supporting both 2.4 GHz and 5 GHz bands. Another upgrade is the addition of Bluetooth low energy, a technology built for applications that do not require large amounts of data to be exchanged but are required to have a long battery life.

Creators of the Raspberry Pi initially believed that they would sell at most 1,000 units. Little did they know that their invention would explode in popularity. As of March 2018, sales of Raspberry Pi computers has passed the 19 million mark.

The following is a list of just a few of the operating systems (system images) available for the Raspberry Pi:

In this project, we will install the Raspbian operating system onto our Raspberry Pi. After installation, we will take a quick tour of the operating system to familiarize ourselves with it. We will start by formatting a microSD card to store our installation files. We will then run the installation from the microSD card. After Raspbian has been installed, we will take a quick look at it in order to familiarize ourselves with it.

This project should take about two hours to complete, as we install the Raspbian operating system and take a quick look at it.

The following is required to complete this project:

The Raspbian OS is considered the default or go-to operating system for the Raspberry Pi. In this section, we will install Raspbian using the NOOBS image.

Raspberry Pi uses a microSD card to store the operating system. This allows you to easily switch between different operating systems (system images) for your Raspberry Pi. We will be installing the default Raspbian OS for our projects using the NOOBS image.

Start by inserting the microSD card into a USB adapter and plug it into your computer: 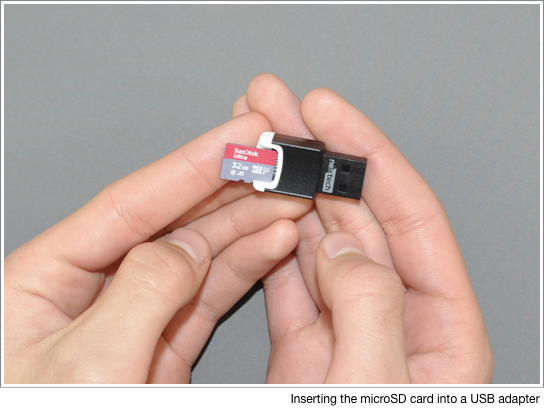 You may need to format the microSD card. If so, use the utilities appropriate for your computer's operating system to format the card to FAT32. It is recommended that you use a card with a capacity of 8 GB or greater. For Windows OS and cards with 64 GB of capacity or greater, a third-party tool such as FAT32 format should be used for formatting.

Unzip the NOOBS image that you downloaded. Open up the unzipped directory and drag the files over to the microSD card.

The files should look the same as in the following screenshot: 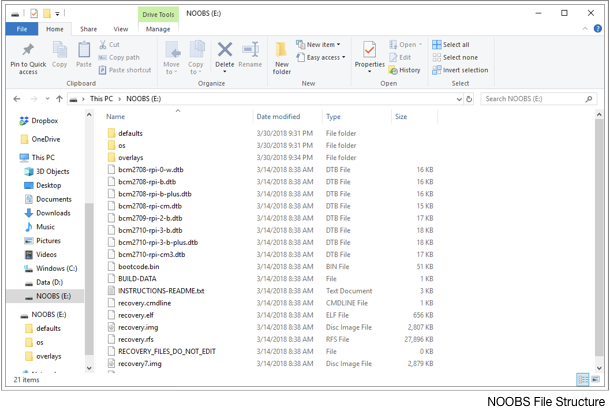 We will now install Raspbian on our Raspberry Pi. This step should be familiar to those that have previous experience installing operating systems such as Windows or macOS. The Raspbian operating system will be installed and will run off of our microSD card.

To install Raspbian onto our microSD card, do the following: 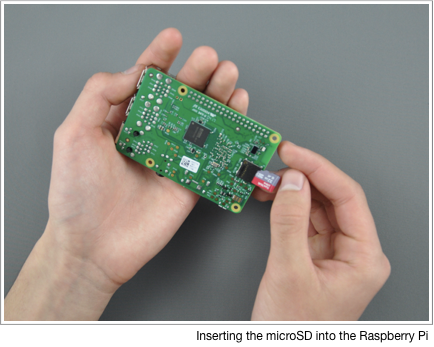 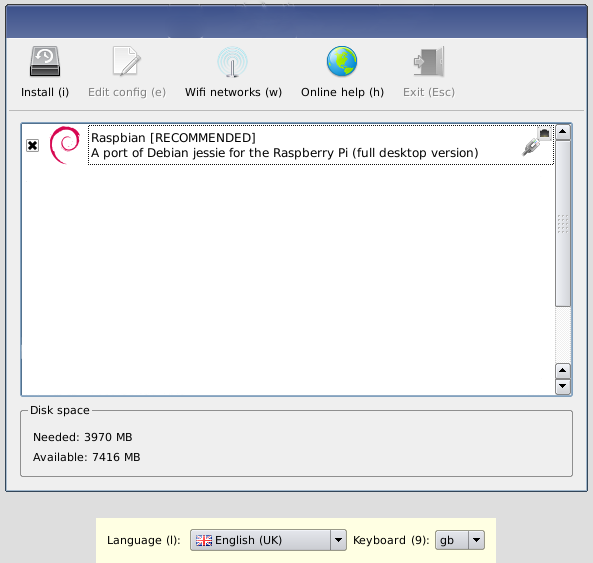 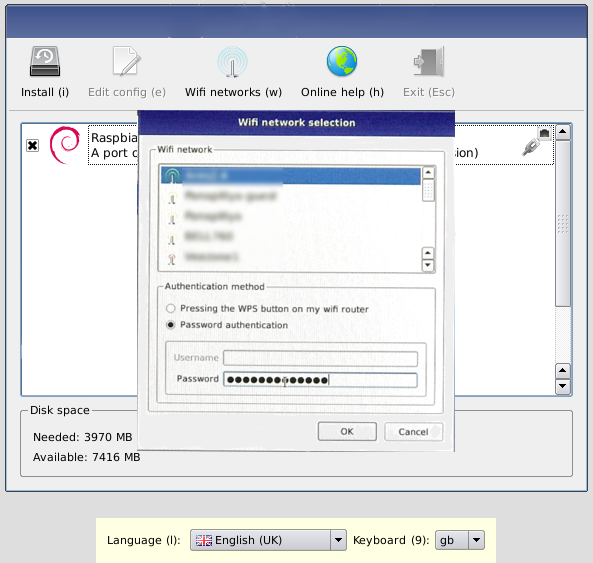 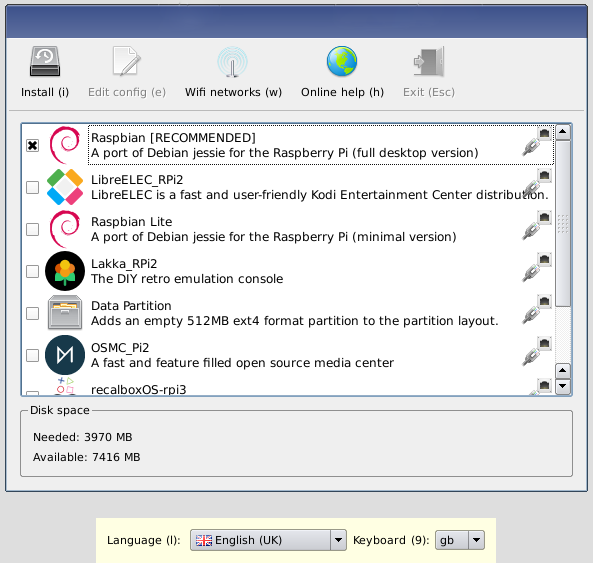 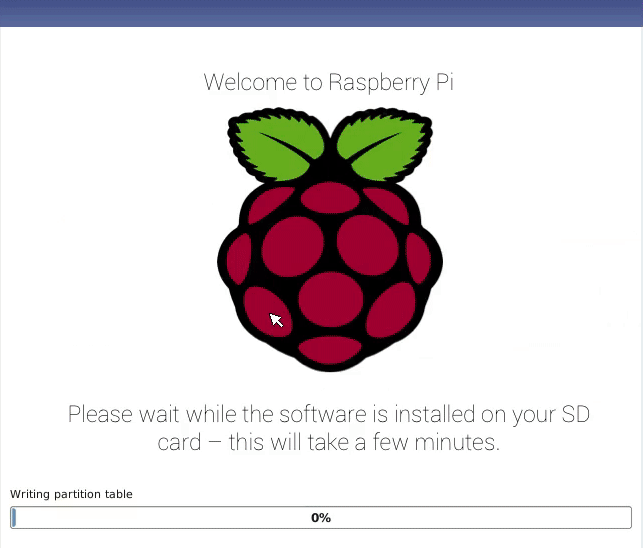 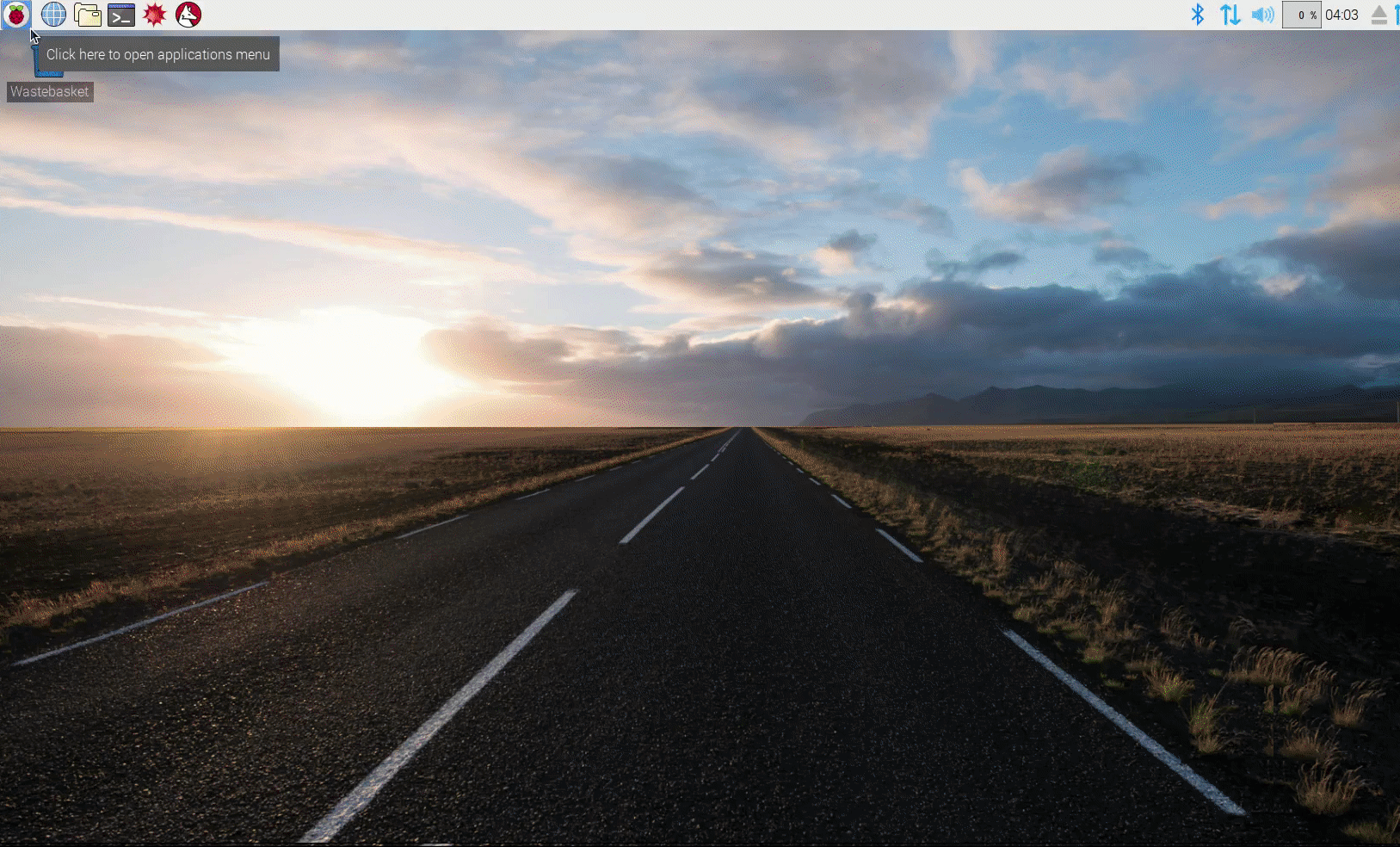 The Raspbian desktop is similar to the desktops of other operating systems such as Windows and macOS. Clicking the top-left button drops down the application menu where you may access the various pre-installed programs. We may also shut down the Raspberry Pi from this menu: 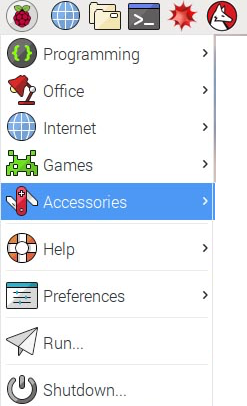 The second button from the left loads the Google Chromium web browser for the Raspberry Pi:

The Chromium browser is a lightweight browser that runs remarkably well on the Raspberry Pi: 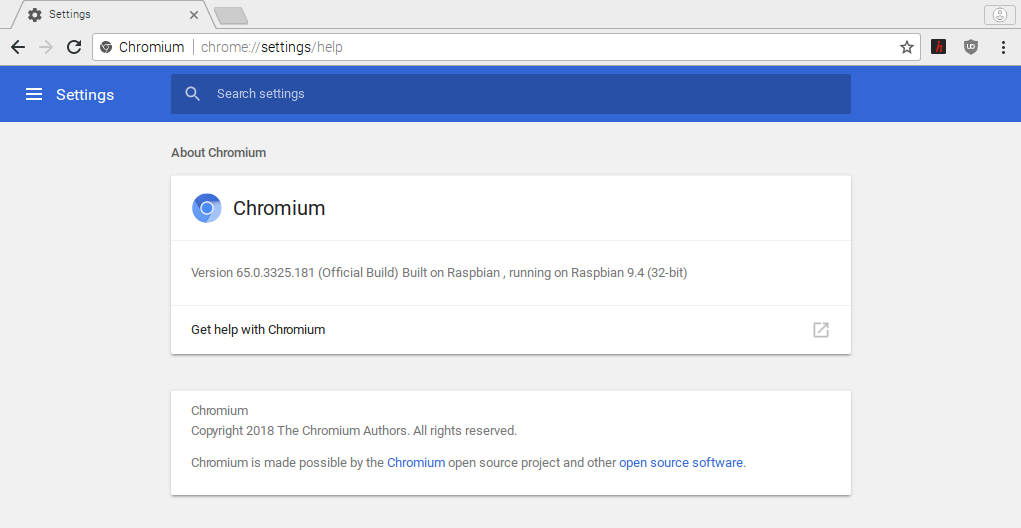 The two-folders button opens up a window showing the home folder:

The home folder is a great place to start when looking for files on your Raspberry Pi. In fact, when you take screenshots using either the scrot command or the Print Screen button, the file is automatically stored in this folder: 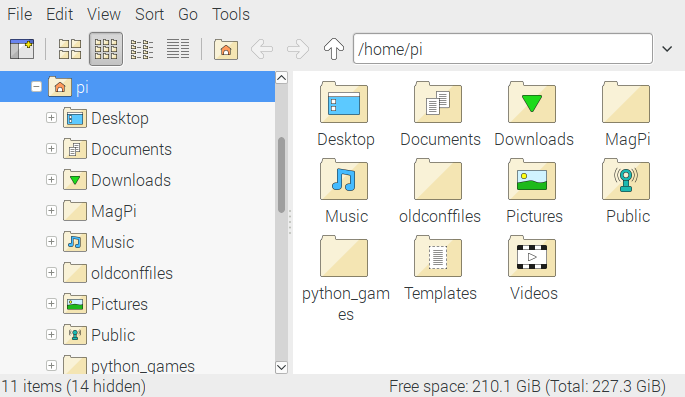 The third button from the left opens up the Terminal. The Terminal permits command-line access to Raspberry Pi's files and programs:

It is from the command line where you may update the Raspberry Pi using the sudo apt-get update and sudo apt-get dist-upgrade commands. 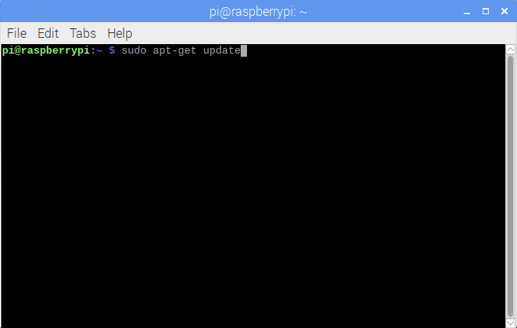 It's a good idea to run both of these commands right after installing Raspbian using the sudo command. The default user for Raspbian on the Raspberry Pi is pi, which is part of the Super Users group in Raspbian, and thus must use the sudo command (the default password for the pi user is raspberry): 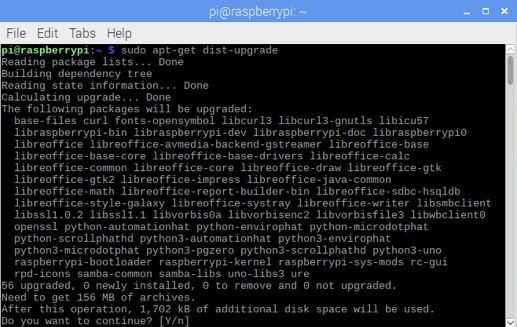 Mastering the command line is a virtue that many a programmer aspires to acquire. Being able to rapidly type command after command looks so cool that even movie makers have picked up on it (when was the last time you saw the computer wiz in a movie clicking around the screen with a mouse?). To assist you in becoming this uber cool computer wiz, here are some basic Raspbian commands for you to master using the Terminal:

The third and fourth buttons are for Mathematica, and a terminal to access the Wolfram language, respectively:

Mathematica spans all areas of technical computing and uses the Wolfram language as the programming language. The areas in which Mathematica is used include machine learning, image processing, neural networks and data science: 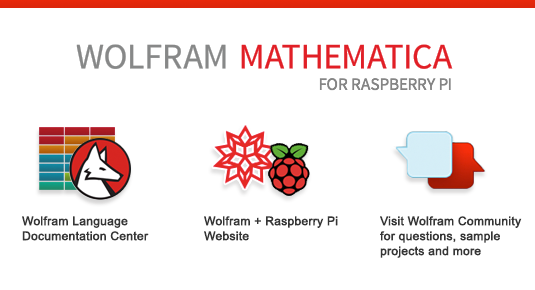 Mathematica, a proprietary software first released in 1988, can be used free for individuals on the Raspberry Pi through a partnership that was announced in late 2013.

Now let’s take a look at some of the programs that are accessed from the main drop-down menu.

Sonic Pi is a live coding environment for creating electronic music. It is accessed from the Programming menu option. Sonic Pi is a creative way to create music as the user programs loops, arpeggios, and soundscapes in real time by cutting and pasting code from one part of the app to another. Synthesizers in Sonic Pi may be configured on a deep level, providing a customized experience for the music coder: 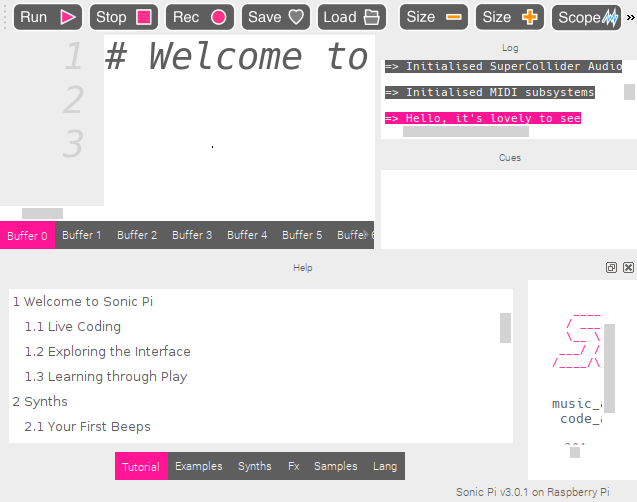 Geared toward an EDM style of music, Sonic Pi may also be used to compose classical and jazz styles of music.

Scratch and Scratch 2.0 are visual programming environments designed for teaching programming to children. Using Scratch, the programmer creates their own animations with looping and conditional statements.

Games may be created within the program. The first version of Scratch was released in 2003 by the Lifelong Kindergarten group at the MIT media lab. Scratch 2.0 was released in 2013, and development is currently underway with Scratch 3.0: 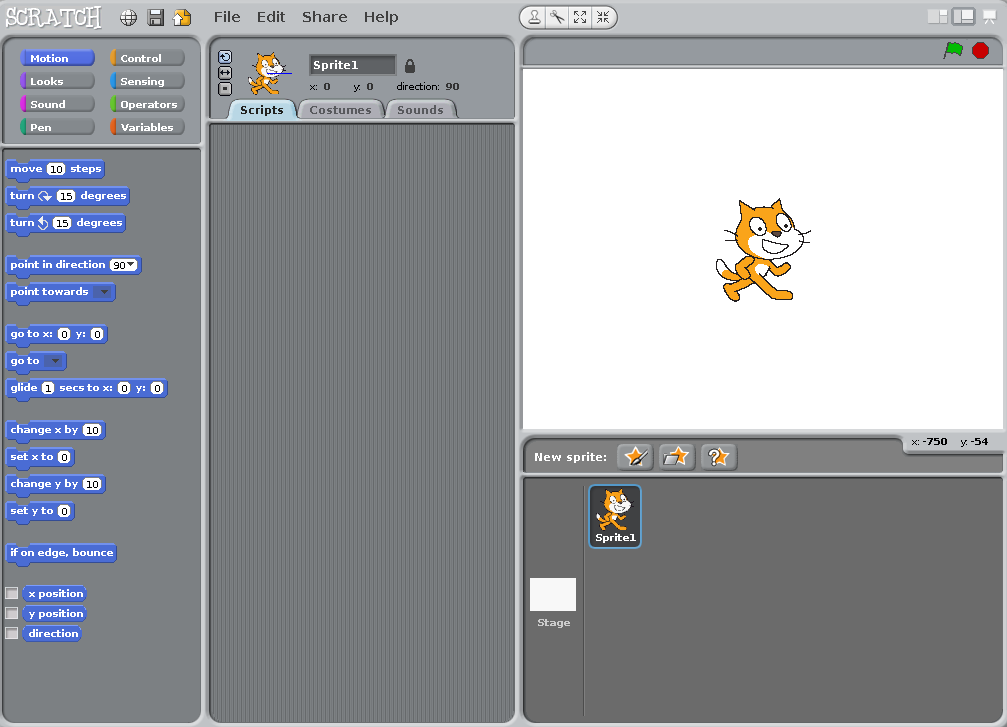 Scratch and Scratch 2.0 may be accessed under the Programming menu option. 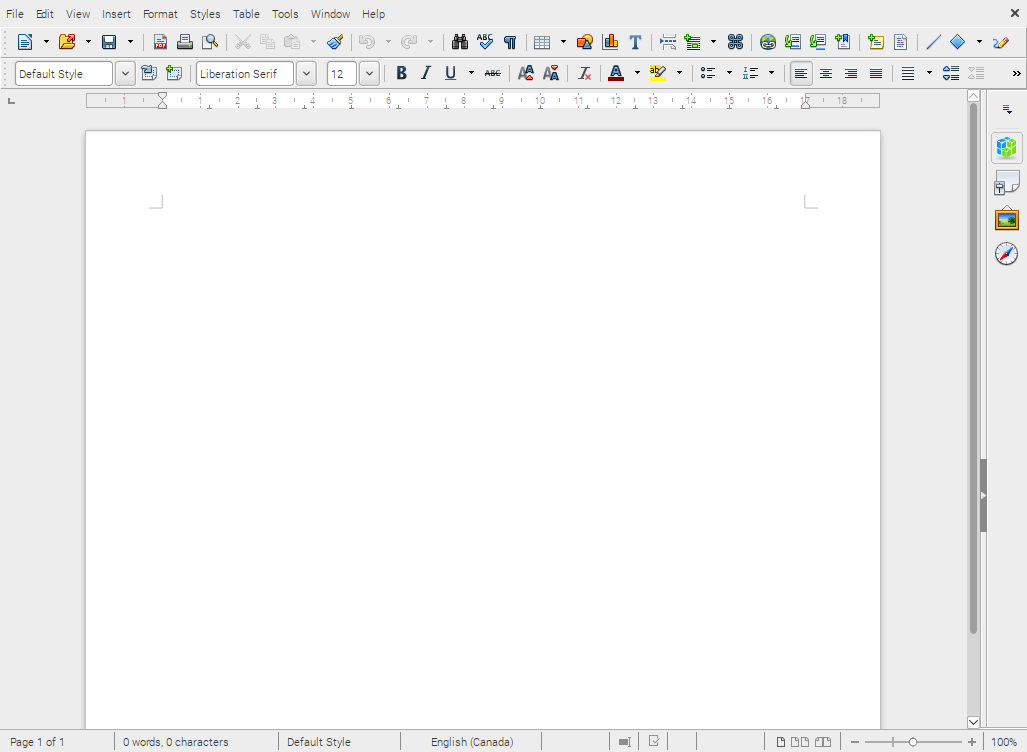 We started this chapter with a look at the history of the Raspberry Pi. What started as an initiative to promote programming to a new generation has grown into a global phenomenon. We then downloaded the NOOBS image and installed the Raspbian OS, the default operating system for the Raspberry Pi. This involved formatting and preparing a microSD card for the NOOBS files.

It's easiest to think that a computer as inexpensive and small as the Raspberry Pi is not all that powerful. We demonstrated that the Raspberry Pi is indeed a very capable computer, as we took a look at some of the applications that come pre-installed with the Raspbian OS.

In Chapter 2, Writing Python Programs Using Raspberry Pi, we will begin Python coding using the Raspberry Pi and some of the development tools available in Raspbian.

For more information on the Raspberry Pi, please consult the main Raspberry Pi website at www.raspberrypi.org. 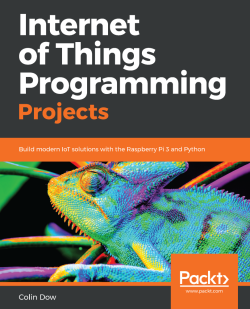