Build tools are a boon to developers working on large projects. With the configuration to run/execute the project moved out, developers can focus more on the project. SBT is a build tool designed for Scala and Java projects. It provides developers with a high productivity work environment hence it comes in really handy when dealing with large projects.

Getting Started with SBT for Scala gets you going with using SBT and also introduces its advanced concepts. SBT is a build tool that uses a Scala-based DSL. Additionally, SBT has some interesting features that come in handy during development, such as starting a Scala REPL with project classes and dependencies on the classpath, continuous compilation and testing with triggered execution, and much more.

Getting Started with SBT for Scala introduces SBT and its various features. It shows how to set up the build definition for a Scala project using sample code to explain different scenarios and use cases. It explains the basic configuration required to compile, test, and run a project using SBT. We will take a look at the additional configuration and settings that can be set to suit the project requirements. You will also learn how to handle project dependencies in SBT and use Scala files to define the build. It shows how to fork the JVM in SBT for different processes and specific configurations. It also explains the intricacies of the build definition, parallel execution.

This book will make you familiar with SBT so that you can use it for different kinds of projects like simple, and multiple modules which can be dependent or independent.

In the stone age of programming, a project team comprised several programmers and a person whose job was to build and deploy the software developed by others. To compile the project, this person would have to compile each file individually. If compilation for all of the files was successful, they went on to deploy the project. There were no means to check for errors while integration. One had to come up with a method to have logs for each process. Deploying was equally complex as it required modules to be placed manually in the right location.

Thankfully, this is not the case anymore.

Building projects involves compiling your code and assembling the binaries with the required dependencies and resources. Build tools are programs that assist in managing and maintaining programs. Initial build tools had support for compiling and linking modules in the required order. Gradually, other features were included.

Some key advantages of automating the build process are as follows:

Make was one of the earliest build tools. It is also the most widespread tool. Make was originally created by Stuart Feldman in 1977 at Bell Labs to ease the process of building and deploying. Prior to Make, the program source was accompanied by OS dependent "make" and "install" shell scripts in the Unix build system. With Make, it became possible to combine the commands for different targets into a single file and abstract out dependency tracking and archive handling. Hence, Make was an important milestone on the path to modern build environments.

In the late 1990s, James Duncan Davidson, a software architect at Sun Microsystems, conceived the idea of Another Neat Tool (ANT) while turning Tomcat into an open source product. ANT is similar to Make, but it is implemented using Java. ANT uses an XML file to describe the build process and its dependencies. Today, ANT is the most widely used build tool for Java development projects.

In 2002, Jason van Zyl felt the need for a standardized project structure, and it led to the creation of Maven. Maven projects are configured using a Project Object Model in an XML file by describing the software project being built, its dependencies on other external modules and components, the build order, directories, and the required plugins.

In September 2004, Jayasoft came up with a transitive relation dependency manager called Ivy. It provides a way to resolve project dependencies in ANT projects.

In 2009, Gradleware built another build tool which used a Groovy-based DSL. Gradle utilizes a directed acyclic graph to determine the order in which tasks can be run.

Leiningen started off as a project with the aim of simplifying Apache Maven for Clojure projects by using Clojure to describe the build requirements. It uses a Clojure-based DSL for writing the build scripts.

Inspired by its predecessors, Simple Build Tool (SBT) was created by Typesafe Engineer, Mark Harrah. It is written in Scala and can be used to compile both Java and Scala code. SBT is not just a build tool, but also provides the basic framework for a development environment. Its integrated Scala console, the continuous compile mechanism, and the fast compile server, make it a necessary tool in any Scala developer's toolkit.

Apart from being the build tool of choice for most Scala projects, SBT provides some very interesting features besides the ones provided by a conventional build tool.

To begin with, SBT can be configured using a simple Scala-based DSL and extended to use a full-fledged configuration with Scala as the project demands.

SBT uses incremental recompilation to reduce the compilation time of the Scala code. An incremental compiler will only compile what needs to be recompiled after changes. It also keeps the compiler's JVM up and running with the project's compiled code to prevent the load time.

SBT commands can be run in a triggered execution mode. That is, if opted by the user, specific tasks will be run whenever the user makes a change in any of the source code. This was originally meant for continuous compilation, but has now been extended for various other tasks. It is also possible to run multiple commands in this mode.

SBT provides support for testing with ScalaCheck, specs, and ScalaTest. Additionally, JUnit tests can also be run by using a plugin (junit-interface). SBT allows the user to run tests selectively or run all the tests. It also allows running only those tests that failed earlier or were excluded earlier or have a dependency on the recompiled code that is run.

SBT can start the Scala REPL with the project loaded in the classpath. One could call the methods defined in the project code within the REPL.

SBT can be configured to have subprojects. This provides better means for achieving modularity. Dependent modules can be clubbed using a single build and desired modules can be made completely independent of others.

SBT allows inclusion of external projects using their path or URL. This means it's also possible to include Git repositories as a dependency for the project. This makes the developer's life a lot simpler as he/she can easily have a project that depends on another project.

There are plugins to support SBT in Sublime Text, IntelliJ Idea, Eclipse, and Netbeans IDE. This makes it easier and simpler to adopt SBT.

SBT can either be installed from a package or manually.

Installing from a package

SBT can be installed directly using MSI for Windows, RPM, or DEB packages downloaded from the SBT website.

SBT can be installed on Mac using either Macports, as follows:

Or, by using Homebrew, as follows:

Download sbt-launch.jar (available at http://repo.typesafe.com/typesafe/ivy-releases/org.scala-sbt/sbt-launch//0.12.3/sbt-launch.jar) and write a script. The script and the JAR file should be in the same folder.

On Windows, create an sbt.bat file and add it to PATH. The contents of the file should be as follows:

On Unix, save the JAR file and script in your ~/bin directory. Name the script sbt. The contents of the script should be as follows:

To check if the installation was successful, use the about or the version command:

The following diagram shows the basic directory structure of a Scala SBT: 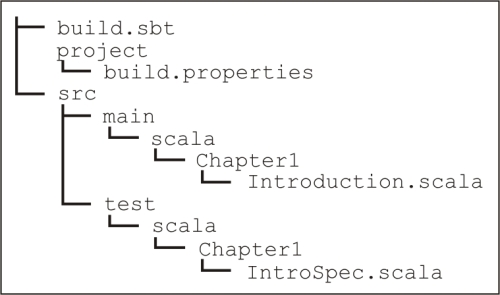 The files generated by SBT are written in the target directory within the project folder by default.

Let's write a program that checks for palindromes. Create Introduction.scala:

The IntroSpec.scala file is as follows:

The build file is used to specify the basic build settings and manage dependencies. We will see the build file in detail in the next chapter. It should be similar to the following:

The blank lines between each item are required to separate them and are not there just for clarity in reading.

Compiling, testing, and running your project

From the terminal/command prompt, go to the project directory:

To compile the project, use the following command:

To run the tests, use the following command:

To run the project, use the following command:

It is also possible to run sbt in batch mode, that is, multiple commands separated by spaces. Execution will happen in the given order. Commands that take arguments must be enclosed in quotes.

The clean command is used to delete all the generated files in the target folder:

Going interactive with the SBT shell

While you are still in your project folder, type sbt in the terminal/command prompt:

It will load the required JAR files, and finally, result in an SBT shell that looks like the following:

Typing console at the command prompt will open Scala REPL with the project's classpath, where you can try out live Scala examples based on your project's code. For example, consider the following:

You could try running other functions as an exercise.

Passing a ~ character before a command tells SBT to keep looking for changes and run the same command if there are any changes in any of the source files.

This is possible in both interactive and batch modes.

After changes are saved, it resumes on its own.

In this chapter, we saw how to build a simple Scala project in SBT and execute basic operations, such as compile, test, and run. In the following chapters, we will see how we can customize the build for our project based on various settings.

A very helpful guide for those with little exposure to SBT

The content of the book is NOT about SBT, it is WebRTC book! 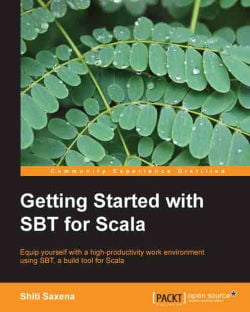