This guide will teach you everything you need to know to start developing your own game, from the design process, to the creation, and in-depth development features of GameSalad.

You will start by designing your game and importing artwork, and quickly move to setting up in GameSalad. Once you set up your menu and controls, you will create players and make them attack all they find while detecting collisions. Of course, it's important to keep track of their health, ammo, and other vitals, so you will learn that next! To spice things up further, we will add enemies, teach them how to behave (or not), and create minimaps and other objectives to keep your players hooked.

We will round off with some important details about monetization, cross-platform deployment, and other pearls of wisdom to help you on your own journey. Phew!

Do you have an amazing idea for a game? Do you want to create the next Super Mario, Portal, or Half-Life? (The gaming community could probably release the third instalment of Half-Life sooner than Valve, but hey! I joke.)

But wait! I know what you're thinking, "Man! I have no idea how to do any of that fancy fandangled coding." That's why you've come to the right place! I'm going to guide you through a fantastic program called GameSalad. What is GameSalad you ask? It's a great studio for creating multi-platform, super powerful games, and requires no coding! Everything is behavior based, but we'll get into that a little later. In this chapter, we are going to look at some of the following:

There have been a lot of changes in GameSalad recently. From a nice redesign of the interface to many new features and changes; it's worth looking into.

All these changes are drastic, and you will see how great it is when you dive into GameSalad. If you've used GameSalad in the past, you are going to notice a massive difference in performance and ease of development. I'm already astonished at the bug fixes. Oh! How many projects I've lost to crashes and bugs! Now we don't have to worry about any of that!

Now that you know what's new, let's get it on our computers.

Let's head over to www.gamesalad.com; while the creator is downloading, let's register an account as well. 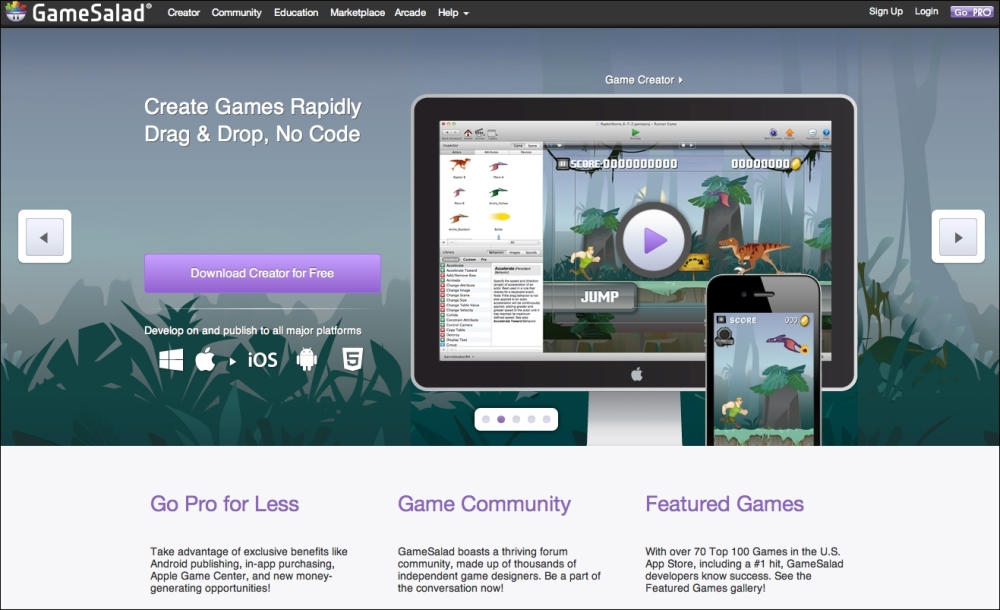 Right on the front page, there's a button to download GameSalad Creator. Click on that button and you will now be greeted by a screen requesting your e-mail address. Fill yours in and check the I am over 13 years of age and have read and agreed to the Terms of Service checkbox. GameSalad will start downloading. You are now one step closer to creating your very own awesome game!

Now, while you're waiting for the download to finish, let's create an account. On the top-right corner of the GameSalad banner, you will see an avatar button next to a drop-down arrow. Click on it and it says Sign Up; click that bad boy. There will be a pop-up box asking for your information. Simply fill it in. This is shown in the following screenshot: 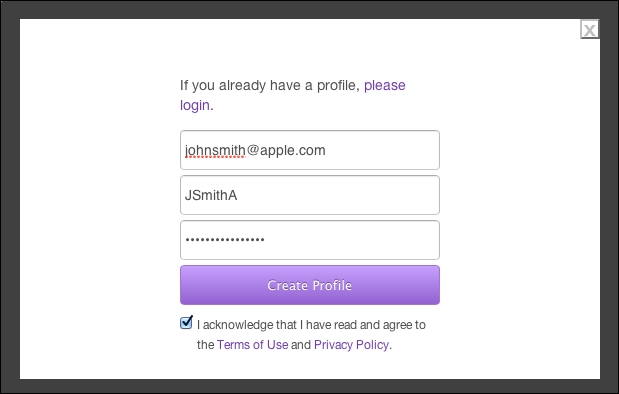 After this, you will receive an e-mail asking you to activate your account. Once you do, boom! You're done! That was super easy.

Good question! An account is required for publishing, but you also get great benefits such as:

Now, let's install GameSalad. This is pretty standard stuff, but if you don't know how, let me walk you through it. 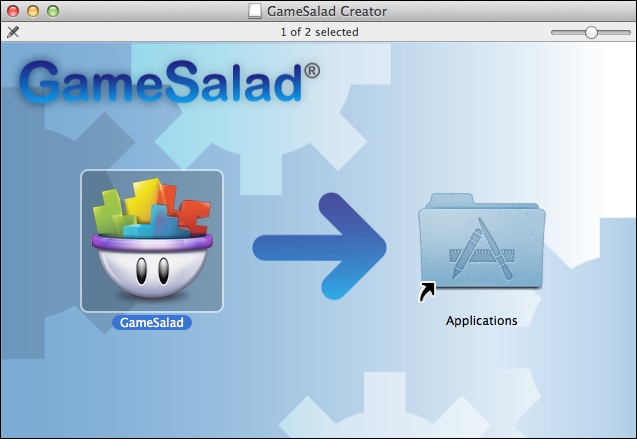 Once this is done, you will have officially installed GameSalad on your Mac!

Locate the saved installation file and open it. You will be prompted throughout the installation process. Once it's done, all you have to do is open it.

Easy peasy lemon squeezy! Once that's done, let's dive in to GameSalad for a quick overview of the new interface.

A quick tour of the interface

Now that we have installed GameSalad, let's open it. For Mac, go to your Applications folder and open GameSalad. For Windows, the default location is under Program Files | GameSalad | GameSalad Creator. Or you can find it in the Start menu.

This is the screen you will be greeted with if you are running GameSalad on Mac OS X; the new main menu is as shown in the following screenshot: 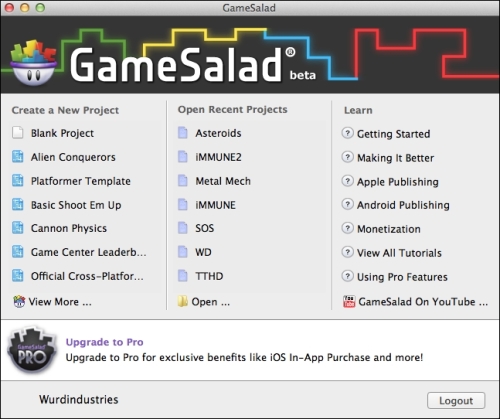 Now we are met with the Project Info tab, as shown in the following screenshot: 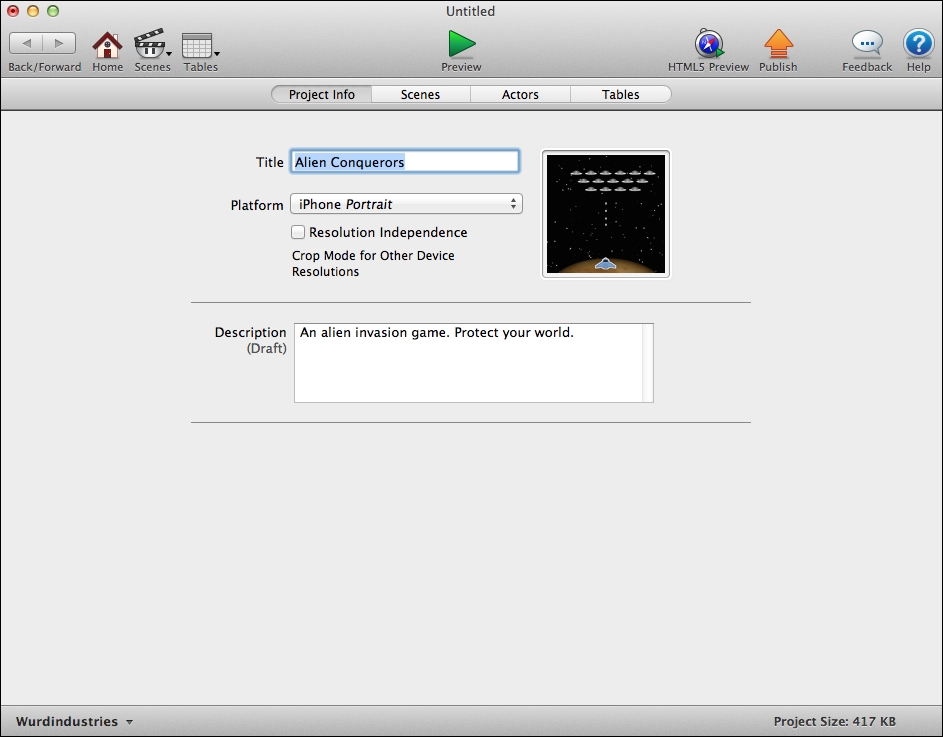 On this screen, you can set the title of your project, whatever platform you want to develop for, and a description. We will start with what the buttons do:

Click on this tab and you will see the different levels you have created. You can see in this template project that there are three scenes—two levels and one for a "You Win" screen. 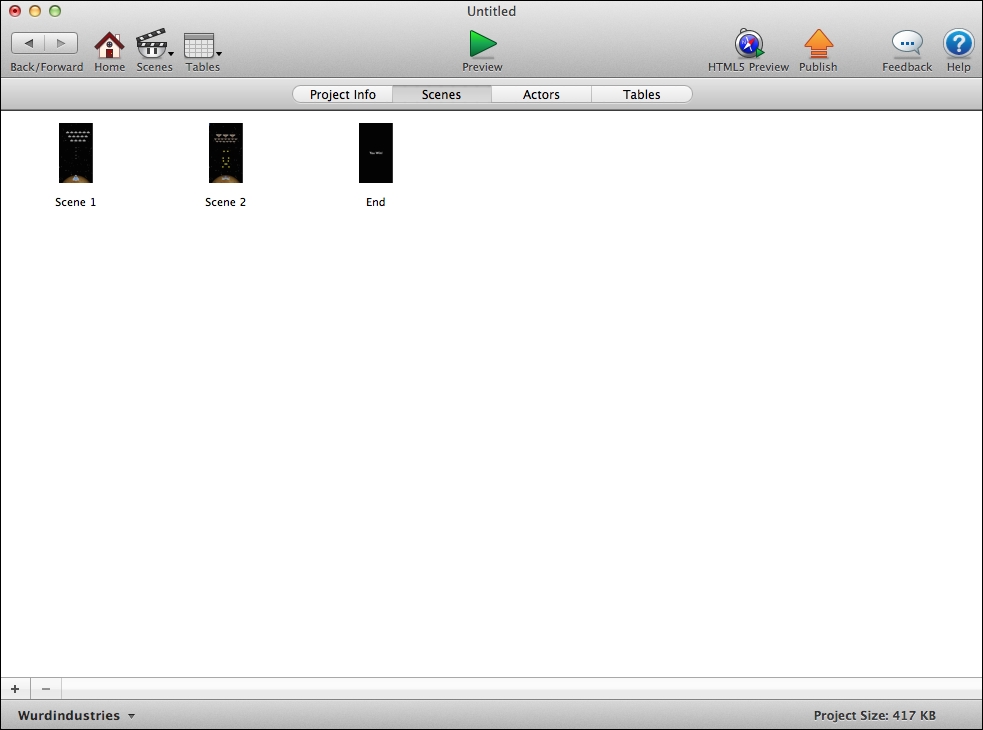 At the bottom of this screen, you have a '+' and a '-' button, which allow you to create (+) and delete (-) scenes. Give it a try. Click on some of the scenes and explore the levels a little bit to see how things work. Again, we will get into more details on this later.

This tab shows you all the actors and objects you have created throughout your project. What are actors? Actors are the visual objects in your game. Actors can be characters you play, enemies, obstacles, platforms, background objects, and so on. Here you can create and delete actors as well as manage them. You can also create tags and arrange the actors accordingly. These are all things we will discuss later. Look at all the potential you have here. Can you picture the awesomeness you are about to create? 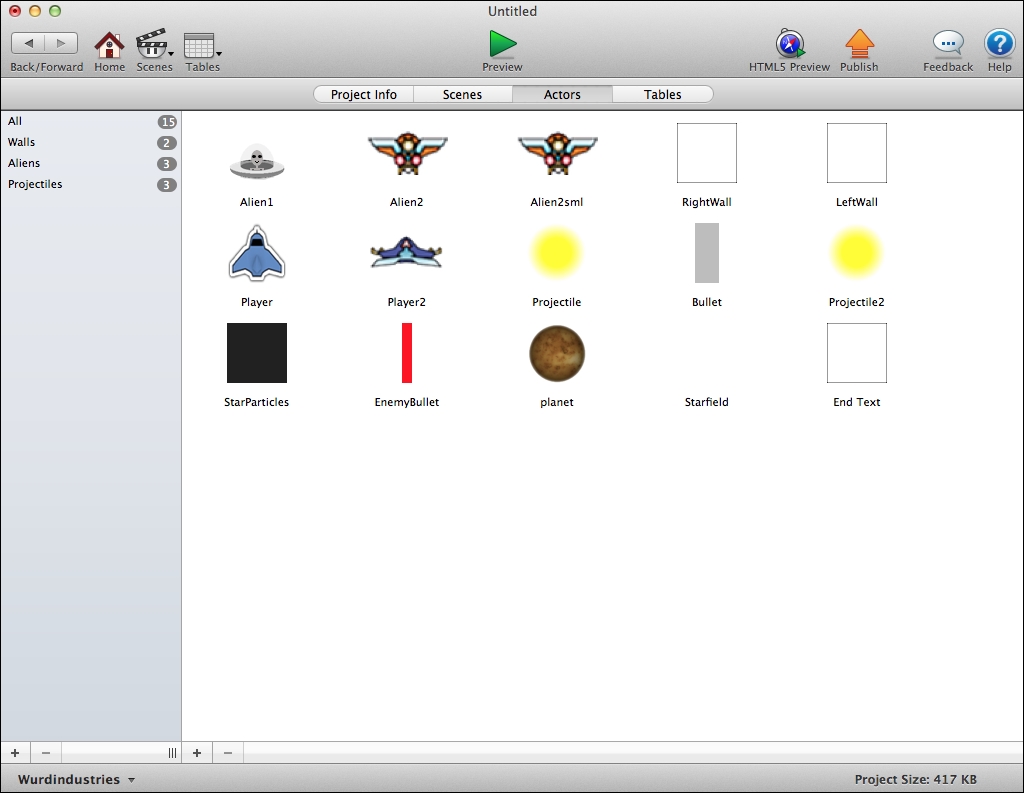 When you start editing these actors, you will be greeted with the actor editor, as seen in the following screenshot: 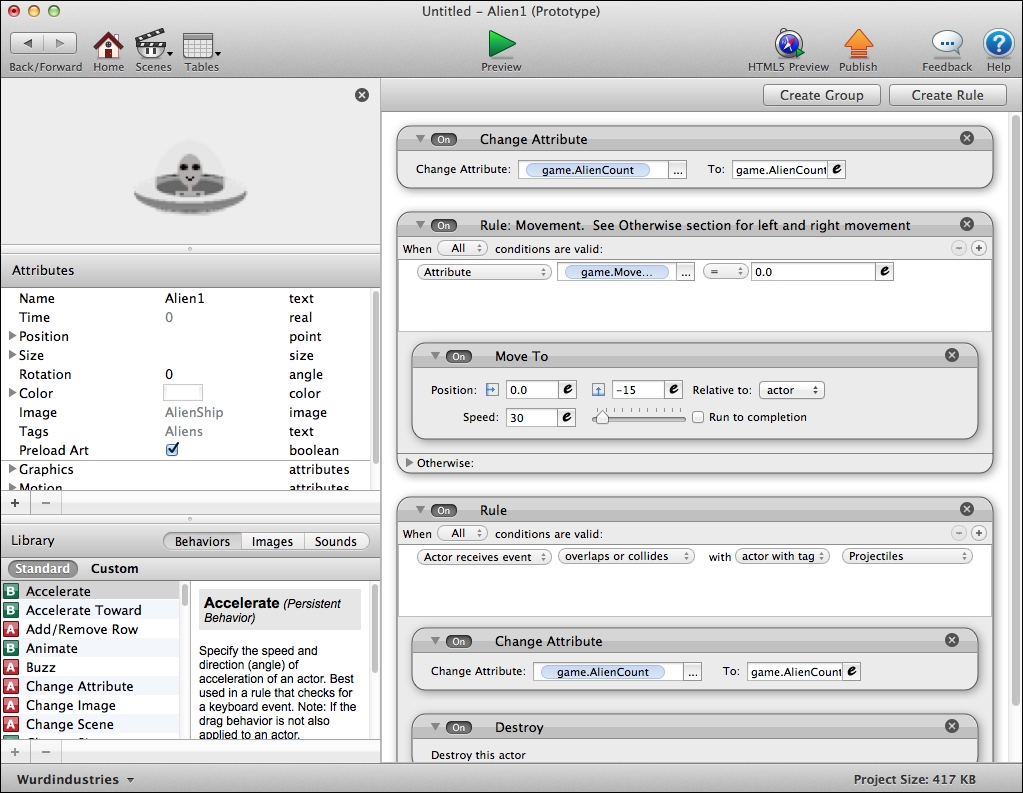 Scroll through some of the behaviors or actions and get an idea of the things you can do. I'm sure you'll see you can get into some pretty powerful rules and behaviors.

From here, you manage all your tables. What are tables? Essentially, they are a great way to store data and information. Think of it as an Excel file that stores all the players' items, scores, and information. GameSalad has the ability to save information into them and load them all on the fly. This project we opened didn't have any tables created, so I added a few just so you can get an idea of what this screen looks like when populated. When you click on a table, you will essentially open an Excel file. You can add rows and columns and populate them accordingly. You can also import and export CSV files, if you prefer to use your own editor. We will get into using tables later in this book. 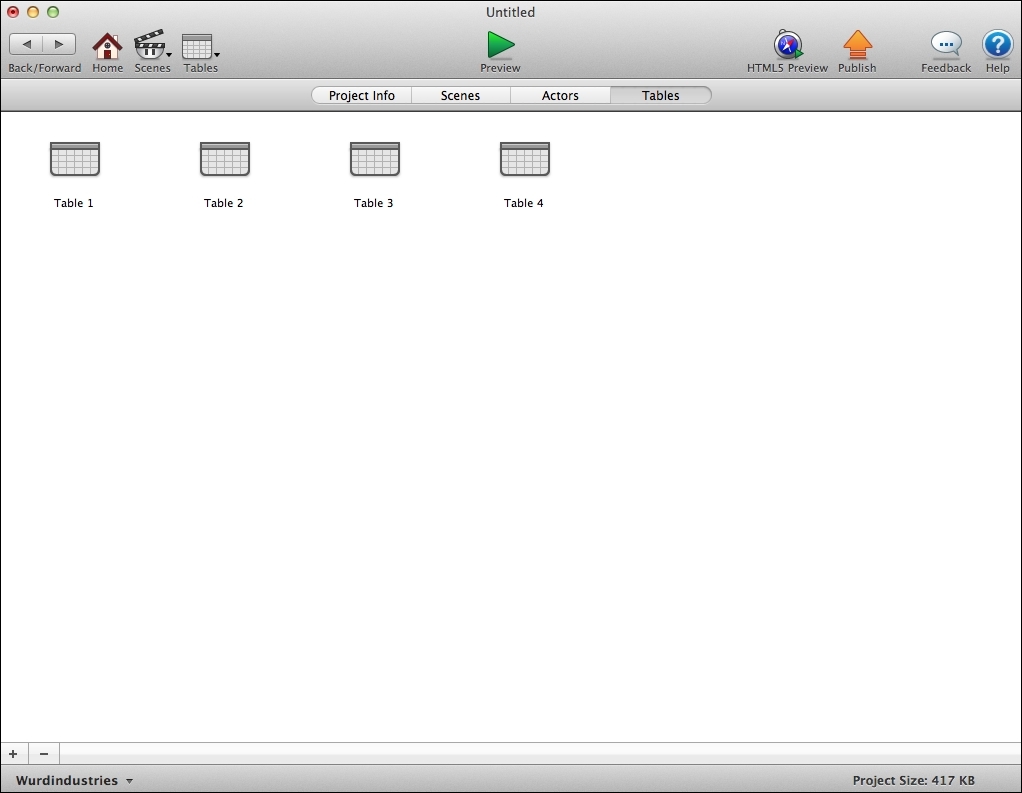 I did some test populating of a table. These would be items available within your game. As you can see, I created a few items just so you can see how the table editor works.

The Text column is obviously the name of the item. The Integer column is the value of the item, should you choose to sell it in-game. The Boolean column is to detect whether you already own the item in your inventory.

Boolean?! What's this trickery? A Boolean is a complicated way of saying whether something is true or false. Let's check out the table in the following screenshot: 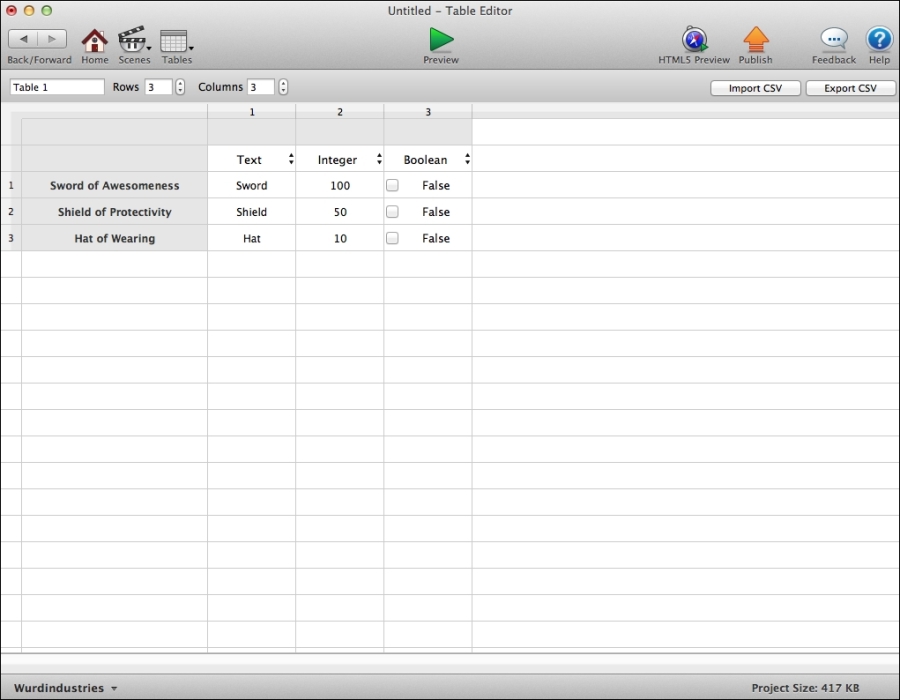 Do things seem easy to navigate? They sure are. Don't worry if you don't understand some interface elements right now. We are going to get into them in the next few chapters.

In this chapter, we learned about the great new features in GameSalad 0.11, and we downloaded GameSalad and set up our own user account. We also had a quick overview of the GameSalad interface. This is all preparation for using the software, getting to know what's new, and the advantages of having an account. An interface tour will help you in your game development.

As we continue through this book, we are going to get as deep into the interface and development as we can get; but don't worry, it's not hard at all! Hopefully, by the end of this book, you will be able to take what you've learned and create your own awesome game!

In the next chapter, we are going to discuss the design process-how to design your game and get things into production.

Sit tight... It's going to be a fast-paced ride! 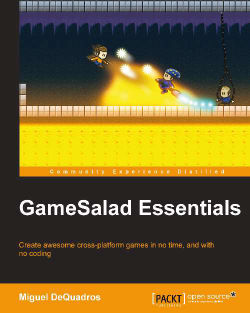