GeoServer is an open source server-side software written in Java and allows users to share and edit geospatial data. Designed for interoperability, it publishes data from any major spatial data source using open standards. GeoServer can create maps in a variety of output formats. OpenLayers, a free mapping library, is integrated into GeoServer, making map generation quick and easy. GeoServer is built on GeoTools, an open source Java GIS toolkit.

In this Volume you will cover the foundations of GeoServer so that you understand how GeoServer works. We will start by exploring the software platform on which GeoServer runs, including the operating system, Java runtime, and the other libraries on which GeoServer depends; you will learn about the minimum recommended specifications and JRE dependencies. Next you will learn to troubleshoot problems that may occur in a GeoServer installation before they happen; you will also learn how to choose the type of installation for GeoServer in order to optimize your experience. Further you will be guided through installing GeoServer on your chosen platform, learning not just how to install GeoServer, but what exactly you've installed.

After installation, you will learn about the default web mapping API for GeoServer, OpenLayers, how to test it, and how to make your first OpenLayers web map on your local file system.

Finally you will learn about GeoServer data stores, adding data in GeoServer, and how to create data stores from local and external resources in a variety of formats using GeoServer management features.

This video course will provide a step–by-step guide to understanding the foundations of GeoServer and how it works. You will cover GeoServer fundamentals and its environment, GeoServer installation and setup, creating your first OpenLayers Web map application and GeoServer data stores, and adding data in GeoServer. At the end of this volume you will understand the fundamentals of GeoServer, and how to publish a variety of data stores, and how they will be deployed through HTML web page-embedded OpenLayers maps.

In a step-by-step manner, this video covers the foundations of GeoServer so that you understand how GeoServer works. You will understand the underpinnings of GeoServer, and how to publish a variety of data stores, and how they can be deployed through HTML web page-embedded OpenLayers maps.

Excellent way to jump into Geoserver and it is a great way to quickly assimilate the fundamentals. 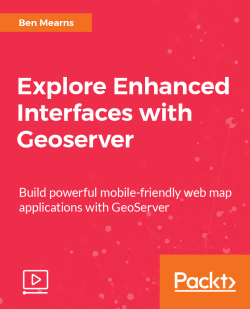 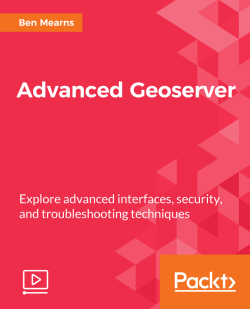 A fast-paced guide to put your Geoserver-based web application into fast, user-friendly, and secure production

A fast-paced guide to put your Geoserver-based web application into fast, user-friendly, and secure production 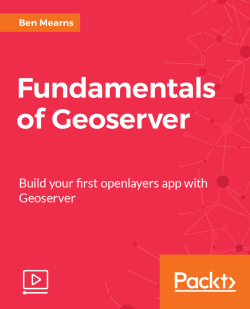