This is a fast-paced guide that will help you to write real-world applications by utilizing a wide range of functional techniques and styles.


Chapter 1. The Powers of JavaScript's Functional Side – a Demonstration

For decades, functional programming has been the darling of computer science aficionados, prized for its mathematical purity and puzzling nature that kept it hidden in dusty computer labs occupied by data scientists and PhD hopefuls. But now, it is going through a resurgence, thanks to modern languages such as Python, Julia, Ruby, Clojure and—last but not least—JavaScipt.

JavaScript has proven to be an important technology that isn't going away for quite a while. This is largely due to the fact that it is capable of being reborn and extended with new frameworks and libraries, such as backbone.js, jQuery, Dojo, underscore.js, and many more. This is directly related to JavaScript's true identity as a functional programming language. An understanding of functional programming with JavaScript will be welcome and useful for a long time for programmers of any skill level.

Why so? Functional programming is very powerful, robust, and elegant. It is useful and efficient on large data structures. It can be very advantageous to use JavaScript—a client-side scripting language, as a functional means to manipulate the DOM, sort API responses or perform other tasks on increasingly complex websites.

But before we begin, let's perform an experiment.

In pursuit of a real-world application, let's say we need an e-commerce web application for a mail-order coffee bean company. They sell several types of coffee and in different quantities, both of which affect the price.

First, let's go with the procedural route. To keep this demonstration down to earth, we'll have to create objects that hold the data. This allows the ability to fetch the values from a database if we need to. But for now, we'll assume they're statically defined:

As you can see, this code is very basic. What if there were many more coffee styles than just the three we have here? What if there were 20? 50? What if, in addition to size, there were organic and non-organic options. That could increase the lines of code extremely quickly!

Using this method, we are telling the machine what to print for each coffee type and for each size. This is fundamentally what is wrong with imperative code.

While imperative code tells the machine, step-by-step, what it needs to do to solve the problem, functional programming instead seeks to describe the problem mathematically so that the machine can do the rest.

With a more functional approach, the same application can be written as follows:

The first thing that should be obvious is that it is much more modular. This makes adding a new size or a new coffee type as simple as shown in the following code snippet:

Arrays of coffee objects and size objects are "mixed" together,—that is, their methods and member variables are combined—with a custom function called plusMixin (see Chapter 7, Functional and Object-oriented Programming in JavaScript). The coffee type classes contain the member variables and the sizes contain methods to calculate the name and price. The "mixing" happens within a map operation, which applies a pure function to each element in an array and returns a new function inside a reduce() operation—another higher-order function similar to the map function, except that all the elements in the array are combined into one. Finally, the new array of all possible combinations of types and sizes is iterated through with the forEach() method The forEach() method is yet another higher-order function that applies a callback function to each object in an array. In this example, we provide it as an anonymous function that instantiates the objects and calls the printPrice() function with the object's getPrice() and getLabel() methods as arguments.

Actually, we could make this example even more functional by removing the coffees variable and chaining the functions together—another little trick in functional programming.

Also, the control flow is not as top-to-bottom as the imperative code was. In functional programming, the map() function and other higher-order functions take the place of for and while loops and very little importance is placed on the order of execution. This makes it a little trickier for newcomers to the paradigm to read the code but, once you get the hang of it, it's not hard at all to follow and you'll see that it is much better.

This example barely touched on what functional programming can do in JavaScript. Throughout this book, you will see even more powerful examples of the functional approach.

First, the benefits of adopting a functional style are clear.

Second, don't be scared of functional programming. Yes, it is often thought of as pure logic in the form of computer language, but we don't need to understand Lambda calculus to be able to apply it to everyday tasks. The fact is, by allowing our programs to be broken down into smaller pieces, they're easier to understand, simpler to maintain, and more reliable. map() and reduce() function's are lesser-known built-in functions in JavaScript, but we'll look at them.

JavaScript is a scripting language, interactive and approachable. No compiling is necessary. We don't even need to download any development software, your favorite browser works as the interpreter and as the development environment.

It is good, it has some type errors 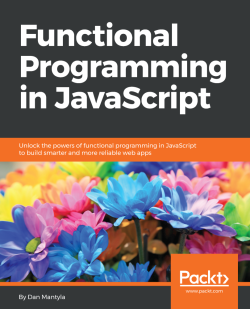