This course will start by introducing the modules and the tools we will be using and how to set up a python environment to perform automation tasks and to deal with file editors and IDE like Pycharm. The course will cover network automation tasks and administration tasks with Python Fabric to automate the execution of web server with simple python programs. Moving ahead, you will learn to create database servers with python and backup them. Also, you will be creating users on multiple servers to manage users and then check the health of the Enterprise and then you will be performing automation tasks on the cloud infrastructure with python. The course will make the most of Python libraries and modules to automate your infrastructure. Leverage Python programming to automate server configuration and administration tasks.

By the end of the course, you will be able to efficiently develop your python skills making it an alternate automation tool from the major automation frameworks.The use cases in this course will help you to track the processes with high utilization on all servers and create web server via python code. So, now need not depend on Network Automation Tools like a puppet, Ansible, and chef and grab this course to make your daily work easy with automation and python modules which will help you to deliver the service more faster than before.

The code bundle for this video course is available at: https://github.com/PacktPublishing/Enterprise-Automation-with-Python-

The course will construct a topology of servers with a different OS like Centos and will start using the tools to develop the python scripts we need for Automation our servers.At each section, the instructor will explain the needed python modules to develop the real-world tasks. At the end of the course, you will be able to make the difference from the Automation and the manual intervention with your servers. 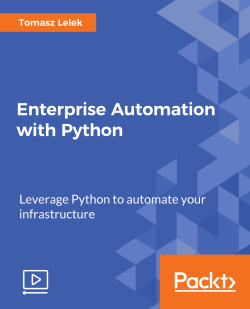