Docker is a portable container format that allows you to run code anywhere from your desktop to the cloud. The workflow around Docker makes development, testing, and deployment much easier and much faster. However, it’s essential that you know the best practices most techniques for optimization so Docker can help you deploy your application most effectively.

This comprehensive guide will improve your Docker workflows and will ensure your application’s production environment runs smoothly. It starts with a short refresher on working with Docker, then you will learn how to take this basic knowledge to the next level by optimizing your Docker infrastructure and applications at scale. At the end of the book, we will put the concepts and everything you have learned about Docker’s features into practice by rolling out supplementary monitoring and troubleshooting instrumentation to your infrastructure. All of these things will ensure your application succeeds using Docker.

Docker allows us to deliver applications to our customers faster. It simplifies the workflows needed to get code from development to production by enabling us to easily create and launch Docker containers. This chapter will be a quick refresher on how to get our environment ready to run a Docker-based development and operations workflow by:

Most parts of this chapter are concepts that we are already familiar with and are readily available on the Docker documentation website. This chapter shows selected commands and interactions with the Docker host that will be used in the succeeding chapters.

It is assumed that we are already familiar with how to set up a Docker host. For most of the chapters of this book, we will run our examples against the following environment, unless explicitly mentioned otherwise:

The following command displays the operating system and Docker version:

If we haven't set up our Docker environment yet, we can follow the instructions on the Docker website found at https://docs.docker.com/installation/debian to prepare our Docker host.

Docker images are artifacts that contain our application and other supporting components to help run it, such as the base operating system, runtime and development libraries, and so on. They get deployed and downloaded into Docker hosts in order to run our applications as Docker containers. This section will cover the following Docker commands to work with Docker images:

Most of the material in this section is readily available on the Docker documentation website at https://docs.docker.com/userguide/dockerimages.

We will use the Dockerfile of training/webapp from the Docker Education Team to build a Docker image. The next few steps will show us how to build this web application:

Pushing Docker images to a repository

Now that we have made a Docker image, let's push it to a repository to share and deploy across other Docker hosts. The default installation of Docker pushes images to Docker Hub. Docker Hub is a publicly hosted repository of Docker, Inc., where anyone with an account can push and share their Docker images. The following steps will show us how to do this:

Now that we have successfully pushed our Docker image, it will be available in Docker Hub. We can also get more information about the image we pushed in its Docker Hub page, which is similar to that shown in the following image. In this example, our Docker Hub URL is https:// hub.docker.com/r/hubuser/webapp: 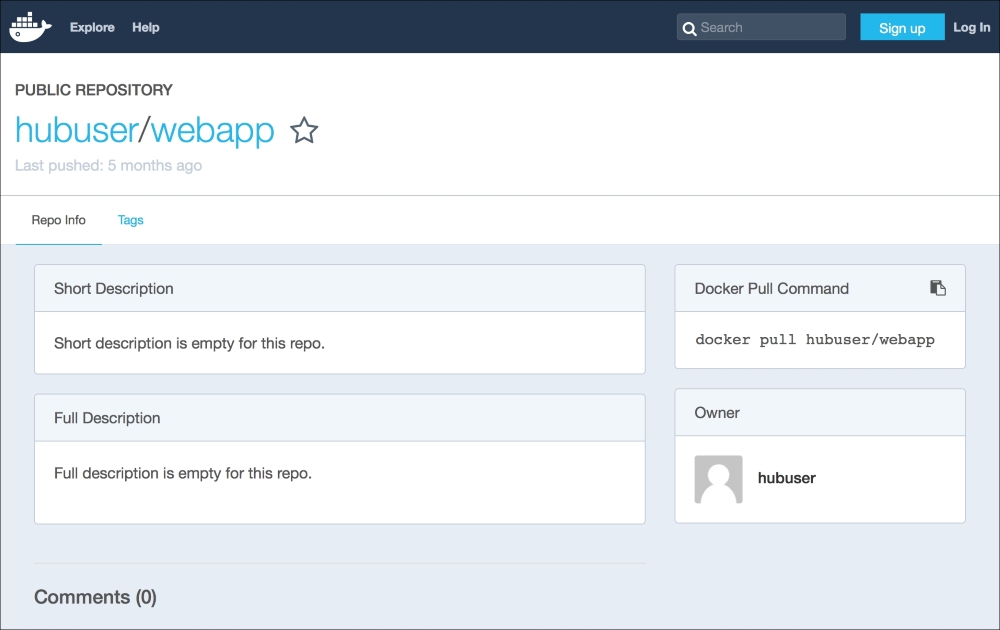 More details on pushing Docker images to a repository are available at docker push --help and https://docs.docker.com/reference/commandline/push.

Docker Hub is a good place to start hosting our Docker images. However, there are some cases where we want to host our own image repository. For example, when we want to save bandwidth when pulling images to our Docker hosts. Another reason could be that our Docker hosts inside a datacenter may have firewalled off the Internet. In Chapter 2, Optimizing Docker Images, we will discuss in greater detail how to run our own Docker registry to have an in-house repository of Docker images.

Pulling Docker images from a repository

More details on how to pull Docker images is available at docker pull --help and https://docs.docker.com/reference/commandline/pull.

Now that we have pulled or built Docker images, we can run and test them with the docker run command. This section will review selected command-line flags that we will use throughout the succeeding chapters. This section will also use the following Docker commands to get more information about the Docker containers being run inside the Docker host:

More comprehensive details on all the command-line flags are found at docker run --help and https://docs.docker.com/reference/commandline/run.

Going back to the training/webapp Docker image we worked on earlier, the application serves a Python Flask web application that listens to port 5000, as highlighted here in webapp/app.py:

Correspondingly, the Docker image makes the Docker host aware that the application is listening on port 5000 via the EXPOSE instruction in the Dockerfile, which can be described as follows:

Now that we have a basic idea of how Docker exposes our container's ports, follow the next few steps to run the hubuser/webapp container:

In addition to the EXPOSE instruction, exposed ports can be overridden during runtime with the --expose=[] flag. For example, use the following command to have the hubuser/webapp application expose ports 4000-4500:

This ad hoc docker run flag is useful when debugging applications. For example, let's say our web application uses ports 4000-4500. However, we normally don't want these ranges to be available in production. We can then use --expose=[] to enable it temporarily to spin up a debuggable container. Further details on how to use techniques such as this to troubleshoot Docker containers will be discussed in Chapter 7, Troubleshooting Containers.

Exposing only makes the port available inside the container. For the application to be served outside its Docker host, the port needs to be published. The docker run command uses the -P and -p flags to publish a container's exposed ports. This section talks about how to use these two flags to publish ports on the Docker host.

The -P or --publish-all flag publishes all the exposed ports of a container to random high ports in the Docker host port within the ephemeral port range defined in /proc/sys/net/ipv4/ip_local_port_range. The next few steps will go back to the hubuser/webapp Docker image that we were working on to explore publishing exposed ports:

The -p or --publish flag publishes container ports to the Docker host. If the container port is not yet exposed, the said container will also be exposed. According to the documentation, the -p flag can take the following formats to publish container ports:

By specifying the hostPort, we can specify which port in the Docker host the container port should be mapped to instead of being assigned a random ephemeral port. By specifying ip, we can restrict the interfaces that the Docker host will accept connections from to relay the packets to the mapped Docker container's exposed port. Going back to the hubuser/webapp example, the following is the command to map the Python application's exposed port 5000 to our Docker host's port 80 on the loopback interface:

With the preceding invocation of docker run, the Docker host can only serve HTTP requests in the application from http://localhost.

More details about linked containers can be found on the Docker documentation site at https://docs.docker.com/userguide/dockerlinks.

In this section, we will work with the --link flag to connect containers securely. The next few steps give us an example of how to work with linked containers:

What happened during the linking process was that the Docker host created a secure tunnel between the two containers. We can confirm this tunnel in the Docker host's iptables, as follows:

These two sources of information will be further explored in the next section as an example use case of working with interactive containers.

By specifying the -i flag, we can specify that a container running in the foreground is attached to the standard input stream. By combining it with the -t flag, a pseudoterminal is also allocated to our container. With this, we can use our Docker container as an interactive process, similar to normal shells. This feature is useful when we want to debug and inspect what is happening inside our Docker containers. Continuing from the previous section, we can debug what happens when containers are linked through the following steps:

In the next chapter, you'll learn how to optimize our Docker images. So, let's dive right in!

will never buy from packt again.

I have just begun to go through the book, but what I have read is easy to understand and it seems complete. 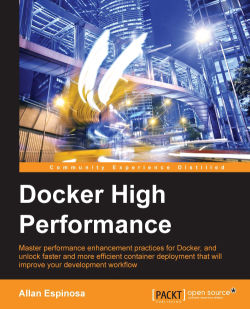