Docker is a Linux container engine that allows you to create consistent, stable, and production-quality environments with containers.

You will start by installing Docker and understanding and working with containers and images. You then proceed to learn about network and data management for containers. The book explores the RESTful APIs provided by Docker to perform different actions such as image/container operations. Finally, the book explores logs and troubleshooting Docker to solve issues and bottlenecks. This book will also help you understand Docker use cases, orchestration, security, ecosystems, and hosting platforms to make your applications easy to deploy, build, and collaborate on.

At the very start of the IT revolution, most applications were deployed directly on physical hardware, over the host OS. Because of that single user space, runtime was shared between applications. The deployment was stable, hardware-centric, and had a long maintenance cycle. It was mostly managed by an IT department and gave a lot less flexibility to developers. In such cases, hardware resources were regularly underutilized.

The following diagram depicts such a setup: 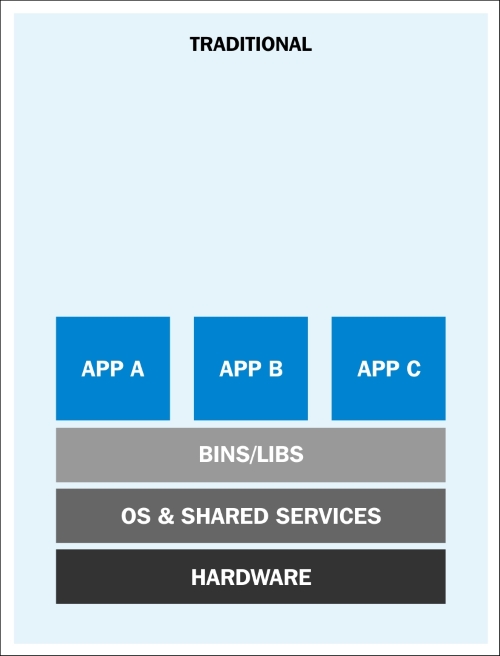 To overcome the limitations set by traditional deployment, virtualization was invented. With hypervisors such as KVM, XEN, ESX, Hyper-V, and so on, we emulated the hardware for virtual machines (VMs) and deployed a guest OS on each virtual machine. VMs can have a different OS than their host; that means we are responsible for managing the patches, security, and performance of that VM. With virtualization, applications are isolated at VM level and defined by the life cycle of VMs. This gives better return on investment and higher flexibility at the cost of increased complexity and redundancy. The following diagram depicts a typical virtualized environment: 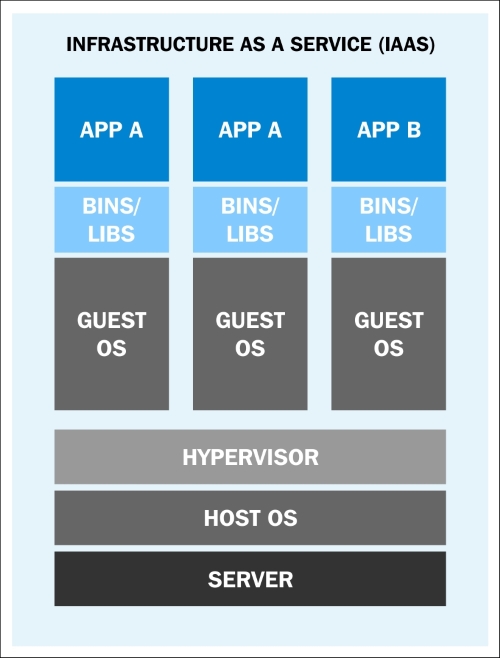 After virtualization, we are now moving towards more application-centric IT. We have removed the hypervisor layer to reduce hardware emulation and complexity. The applications are packaged with their runtime environment and are deployed using containers. OpenVZ, Solaris Zones, and LXC are a few examples of container technology. Containers are less flexible compared to VMs; for example, we cannot run Microsoft Windows on a Linux OS. Containers are also considered less secure than VMs, because with containers, everything runs on the host OS. If a container gets compromised, then it might be possible to get full access to the host OS. It can be a bit too complex to set up, manage, and automate. These are a few reasons why we have not seen the mass adoption of containers in the last few years, even though we had the technology. 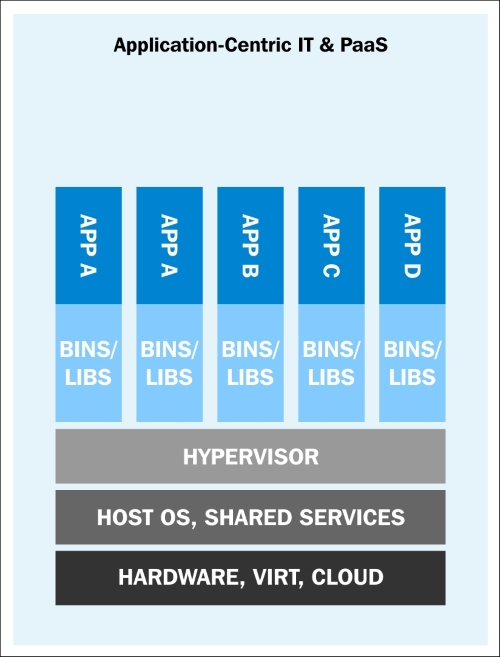 With Docker, containers suddenly became first-class citizens. All big corporations such as Google, Microsoft, Red Hat, IBM, and others are now working to make containers mainstream.

Docker was started as an internal project by Solomon Hykes, who is the current CTO of Docker, Inc., at dotCloud. It was released as open source in March 2013 under the Apache 2.0 license. With dotCloud's platform as a service experience, the founders and engineers of Docker were aware of the challenges of running containers. So with Docker, they developed a standard way to manage containers. 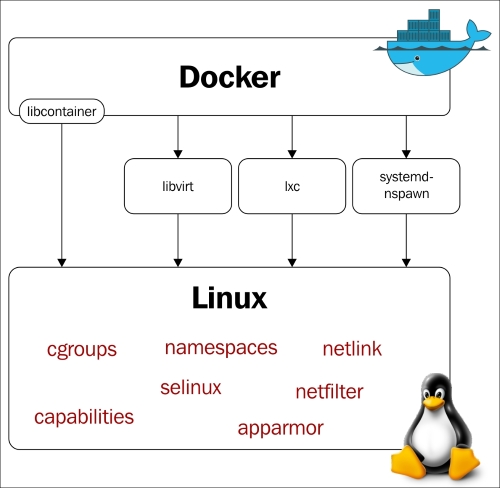 The execution drivers and kernel features used by Docker (http://blog.docker.com/wp-content/uploads/2014/03/docker-execdriver-diagram.png)

Namespaces are the building blocks of a container. There are different types of namespaces and each one of them isolates applications from each other. They are created using the clone system call. One can also attach to existing namespaces. Some of the namespaces used by Docker have been explained in the following sections.

Inside the container, you would see something like the following:

And in the host, it would look like the following:

Also, each net namespace has its own routing table and firewall rules.

Inter Process Communication (ipc) provides semaphores, message queues, and shared memory segments. It is not widely used these days but some programs still depend on it.

If the ipc resource created by one container is consumed by another container, then the application running on the first container could fail. With the ipc namespace, processes running in one namespace cannot access resources from another namespace.

With the uts namespace, we can have different hostnames for each container.

With user namespace support, we can have users who have a nonzero ID on the host but can have a zero ID inside the container. This is because the user namespace allows per namespace mappings of users and groups IDs.

Control Groups provide a mechanism for aggregating/partitioning sets of tasks, and all their future children, into hierarchical groups with specialized behaviour.

In simple terms, they can be compared to the ulimit shell command or the setrlimit system call. Instead of setting the resource limit to a single process, cgroups allow the limiting of resources to a group of processes.

Control groups are split into different subsystems, such as CPU, CPU sets, memory block I/O, and so on. Each subsystem can be used independently or can be grouped with others. The features that cgroups provide are:

Some of the subsystems that can be managed by cgroups are as follows:

There are multiple ways to control work with cgroups. Two of the most popular ones are accessing the cgroup virtual filesystem manually and accessing it with the libcgroup library. To use libcgroup in fedora, run the following command to install the required packages:

Once installed, you can get the list of subsystems and their mount point in the pseudo filesystem with the following command:

The Union filesystem allows the files and directories of separate filesystems, known as layers, to be transparently overlaid to create a new virtual filesystem. While starting a container, Docker overlays all the layers attached to an image and creates a read-only filesystem. On top of that, Docker creates a read/write layer which is used by the container's runtime environment. Look at the Pulling an image and running a container recipe of this chapter for more details. Docker can use several Union filesystem variants, including AUFS, Btrfs, vfs, and DeviceMapper.

Verifying the requirements for Docker installation

Docker is supported on many Linux platforms, such as RHEL, Ubuntu, Fedora, CentOS, Debian, Arch Linux, and so on. It is also supported on many cloud platforms, such as Amazon EC2, Rackspace Cloud, and Google Compute Engine. With the help of a virtual environment, Boot2Docker, it can also run on OS X and Microsoft Windows. A while back, Microsoft announced that it would add native support to Docker on its next Microsoft Windows release.

In this recipe, let's verify the requirements for Docker installation. We will check on the system with Fedora 21 installation, though the same steps should work on Ubuntu as well.

Log in as root on the system with Fedora 21 installed.

With the preceding commands, we verified the requirements for Docker installation.

As there are many distributions which support Docker, we'll just look at the installation steps on Fedora 21 in this recipe. For others, you can refer to the installation instructions mentioned in the See also section of this recipe. Using Docker Machine, we can set up Docker hosts on local systems, on cloud providers, and other environments very easily. We'll cover that in a different recipe.

Check for the prerequisites mentioned in the previous recipe.

The preceding command will install Docker and all the packages required by it.

The default Docker daemon configuration file is located at /etc/sysconfig/docker, which is used while starting the daemon. Here are some basic operations:

Pulling an image and running a container

I am borrowing this recipe from the next chapter to introduce some concepts. Don't worry if you don't find all the explanation in this recipe. We'll cover all the topics in detail later in this chapter or in the next few chapters. For now, let's pull an image and run it. We'll also get familiar with Docker architecture and its components in this recipe. 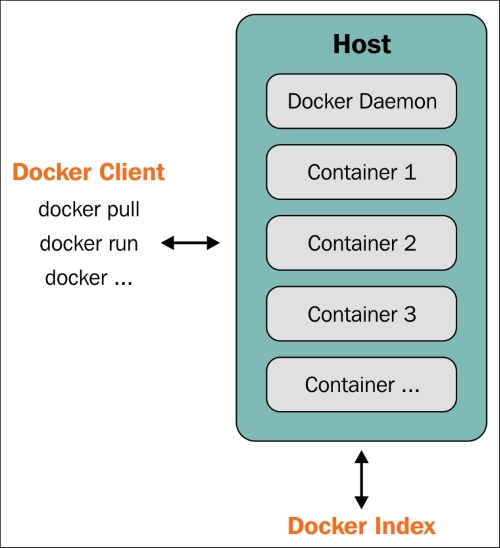 So in our case, the Docker client sends a request to the daemon running on the local system, which then connects to the public Docker Index and downloads the image. Once downloaded, we can run it.

Let's explore some keywords we encountered earlier in this recipe:

For ease of use, we can allow a nonroot user to administer Docker by adding them to a Docker group.

Run the following command to allow the newly created user to administer Docker:

The preceding command will add a user to the Docker group. The added user will thus be able to perform all Docker operations. This can be the security risk. Visit Chapter 9, Docker Security for more details.

Setting up the Docker host with Docker Machine

Earlier this year, Docker released Orchestration tools (https://blog.docker.com/2015/02/orchestrating-docker-with-machine-swarm-and-compose/) and Machine, Swarm, and Compose deploy containers seamlessly. In this recipe, we'll cover Docker Machine and look at the others in later chapters. Using the Docker Machine tool (https://github.com/docker/machine/), you can set up Docker hosts locally on cloud with one command. It is currently in beta mode and not recommended for production use. It supports environments such as VirtualBox, OpenStack, Google, Digital Ocean, and others. For a complete list, you can visit https://github.com/docker/machine/tree/master/drivers. Let's use this tool and set up a host in Google Cloud.

We will be using Docker Machine just for this recipe. Recipes mentioned in this or other chapters may or may not work on the host set up by Docker Machine.

Docker Machine does not appear with the default installation. You need to download it from its GitHub releases link (https://github.com/docker/machine/releases). Please check the latest version and distribution before downloading. As a root user, download the binary and make it executable:

If you don't have an account on Google Compute Engine (GCE), then you can sign up for a free trial (https://cloud.google.com/compute/docs/signup) to try this recipe. I am assuming that you have a project on GCE and have the Google Cloud SDK installed on the system on which you downloaded Docker Machine binary. If not, then you can follow these steps:

From now on, all the Docker commands will run on the machine we provisioned on GCE, until the preceding environment variables are set.

Docker Machine connects to the cloud provider and sets up a Linux VM with Docker Engine. It creates a .docker/machine/ directory under the current user's home directory to save the configuration.

Docker Machine provides management commands, such as create, start, stop, restart, kill, remove, ssh, and others to manage machines. For detailed options, look for the help option of Docker Machine:

You can use the --driver/-d option to create choosing one of the many endpoints available for deployment. For example, to set up the environment with VirtualBox, run the following command:

Docker commands are well documented and can be referred to whenever needed. Lots of documentation is available online as well, but it might differ from the documentation for the Docker version you are running.

Install Docker on your system.

The man command uses the man pages installed by the Docker package to show help. 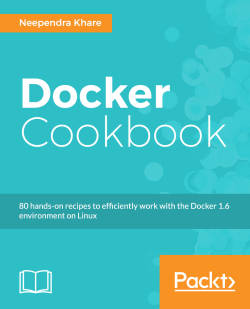