The Ballerina programming language was created by WSO2 for the modern needs of developers where cloud native development techniques have become ubiquitous. Ballerina simplifies how programmers develop and deploy cloud native distributed apps and microservices.

Cloud Native Applications with Ballerina will guide you through Ballerina essentials, including variables, types, functions, flow control, security, and more. You'll explore networking as an in-built feature in Ballerina, which makes it a first-class language for distributed computing. With this app development book, you'll learn about different networking protocols as well as different architectural patterns that you can use to implement services on the cloud. As you advance, you'll explore multiple design patterns used in microservice architecture and use serverless in Amazon Web Services (AWS) and Microsoft Azure platforms. You will also get to grips with Docker, Kubernetes, and serverless platforms to simplify maintenance and the deployment process. Later, you'll focus on the Ballerina testing framework along with deployment tools and monitoring tools to build fully automated observable cloud applications.

By the end of this book, you will have learned how to apply the Ballerina language for building scalable, resilient, secured, and easy-to-maintain cloud native Ballerina projects and applications. 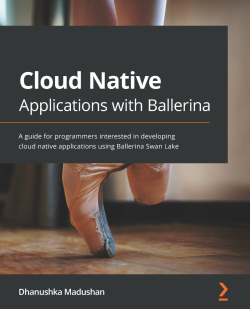