Windows Azure Pack is an on-premises cloud solution by Microsoft, which can be leveraged by Organizations and Services providers for building an enterprise class cloud solution. WAP provides consistent experience to Microsoft Azure, along with capabilities such as multi-tenancy, high density, self-service, automated. WAP can be leveraged to provide both IaaS & PaaS Offerings to internal and external customers.

In this book, we will learn about planning and deployment of Cloud Fabric for Windows Azure Pack, Azure Pack components, VM Clouds and IaaS offerings, PaaS Offering including WebSites & Service Bus, DBaaS offerings, Automation with SMA, and extending capabilities with third party products integration and tenant experience for all services.

We will be covering the following topics in this chapter:

It can be summarized in the following quote from Microsoft's Whitepaper, "Unified Management for Cloud OS: System Center 2012 R2":

"The Microsoft vision for a new era of IT provides one consistent platform for infrastructure, applications, and data: the Cloud OS. The Cloud OS spans your datacenter environments, service provider datacenters, and Windows Azure, enabling you to easily and cost-effectively cloud optimize your business." 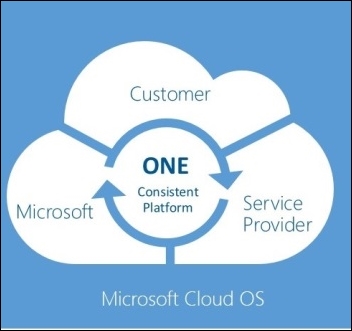 More information on Microsoft Cloud OS can be found at http://www.microsoft.com/en-in/server-cloud/cloud-os/.

What is Windows Azure Pack?

Windows Azure Pack provides cloud service offerings including virtual machines (Infrastructure as a Service), Database as a Service (DBaaS), Platform as a Service (PaaS) and many more along with custom offering enabled architecture which gives flexibility to provide anything as a service (XaaS).

Windows Azure Pack can primarily be used in the following use cases:

Amazingly, Windows Azure Pack is available at no extra cost for Microsoft customers.

Licensing for other Microsoft components like Windows Server, System Center, SQL Server, and so on has to be considered for cloud management and workload infrastructure.

In today's era of cloud computing, IT departments of organizations are turning into IT service providers for their different teams and LOBs. In traditional computing models, different teams approach their IT departments for their IT needs, which becomes quite a lengthy process involving several levels of approvals, procurement of HW/SW, implementations, services, schedules, and much more. In this model, infrastructure readiness itself takes considerable amount of time and resources, resulting in various constraints when it comes to application deployment. The situation gets even worse when it comes to test and development environment-related requests.

A private cloud helps in eliminating these challenges drastically. For example, with a private cloud solution a development team can request for a VM with required specification and middleware components using an easy to use self-service portal without getting into manual e-mail threads with IT infra provider departments. In such a private cloud infrastructure, a development team can expect to have a server ready for applications usage in a matter of minutes, whereas in a traditional model it could have taken days.

Windows Azure Pack is the platform that can help the organization in getting all those private cloud benefits and capabilities in a very efficient manner. Let's have a look at few of the major requirements and characteristics of any private cloud and their solutions using Azure Pack:

All features or self-service capabilities may not be available while using VMware as a hypervisor. This will be covered in detail in Chapter 10, Extend Windows Azure Pack Capabilities with Partner Solutions.

Windows Azure Pack provides service providers the ability to build their own cloud to host services at a lower cost and with proven Azure technologies, enabling them to win more and more business. This brings a win-win situation for cloud providers as well as for Microsoft as the Microsoft Azure technology footprint is expanding in cloud markets beyond Azure data centers.

A cloud service provider's main focus is to provide a true multitenant, self-service cloud along with extreme automation possibilities, which differs from organizational private cloud needs which we discussed earlier. Let's have a look at some major requirements of a service provider's cloud solutions and their fulfillment using Windows Azure Pack:

Mandatory components must be installed in every Windows Azure Pack deployment whereas optional components deployment depends upon use cases.

Windows Azure Pack components use SQL server database to store its configuration and run time data that is highly dependent upon database availability.

Let's understand the roles and functionalities of the preceding components:

Windows Azure Pack cloud solution has different fabric components for each cloud offering required to deliver a particular service. Windows Azure Pack components discussed above would remain consistent and have integration with other system centers and other Microsoft components to provide functionality such as IaaS and PaaS.

Usually, each offering requires an extension which can be installed with Windows Azure Pack components and is responsible for portal integration and extension (admin and tenant integration). This extension communicates with resource providers' fabric components (such as SCVMM, SQL Servers, and so on) directly or indirectly to provision and manage services. 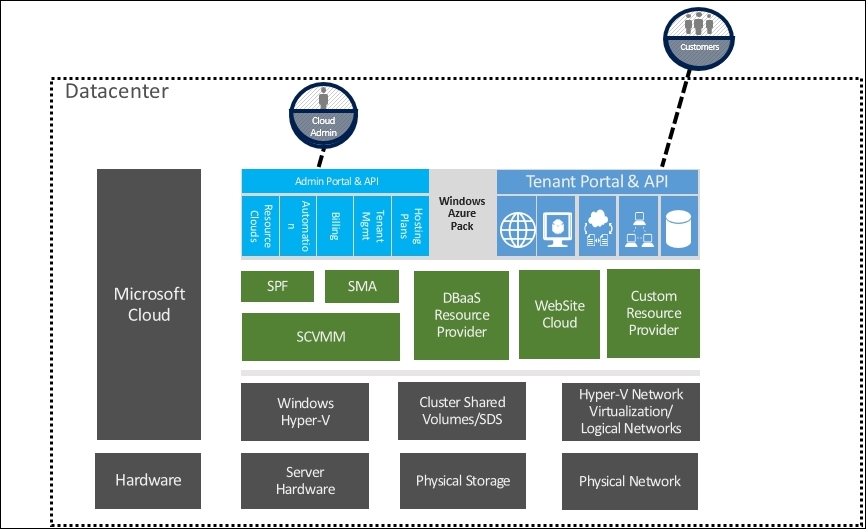 Windows Azure Pack VM Clouds services use SPF to communicate with SCVMM to provision and manage virtual machine resources. All tasks performed by admin or tenants for virtual machines are passed to SCVMM for execution by SPF, that is, SPF is responsible for getting the work done by SCVMM. SMA is integrated with Windows Azure Pack and SPF to add custom automation capabilities to the cloud. IaaS offering also includes virtual network self-service provisioning by tenants provided by SCVMM using Hyper-V network virtualization.

Detailed building procedures for IaaS Cloud will be discussed in Chapter 2, Getting the Cloud Fabric Ready and Chapter 4, Buil ding VM Clouds and IaaS Offerings.

WebSites cloud require the following components to be deployed in order to provide PaaS capabilities for websites cloud services.

Deployment and architecture of the preceding components will be discussed in Chapter 7, Delivering PaaS â€“ WebSites Cloud and Service Bus.

Windows Azure Pack database extension API communicates with database server directly to provision and manage databases for tenants. Deployment and architecture of these components will be discussed in Chapter 8, Delivering Database as a Service.

Deployment and architecture of service bus will be discussed in Chapter 8, Delivering Database as a Service.

Almost all offerings require general Microsoft Infrastructure components such as Active Directory, DNS, and so on.

Windows Azure Pack components, both mandatory and optional can be deployed in various architectures depending upon use case. All components require Windows Server 2012 or 2012 R2 as an operating system and can be deployed in virtual or physical machines. Virtual machines are recommended to take advantage of Hypervisor level protection and other capabilities. All components can be deployed in a redundancy manner by having two or more servers for each components, eliminating any single point of failure. Windows Azure Pack components use Microsoft SQL Server for its database needs, which can also be protected against failures using SQL high availability techniques.

In express deployment architecture all Windows Azure Pack mandatory components are installed on a single machine, whereas optional components can be installed on the same machine or a different machine. This model isn't a recommended model for production deployments and should be used for test and evaluation purposes only.

In the express deployment model, MS SQL Server (Express) can also be installed on this same server or on a separate server. 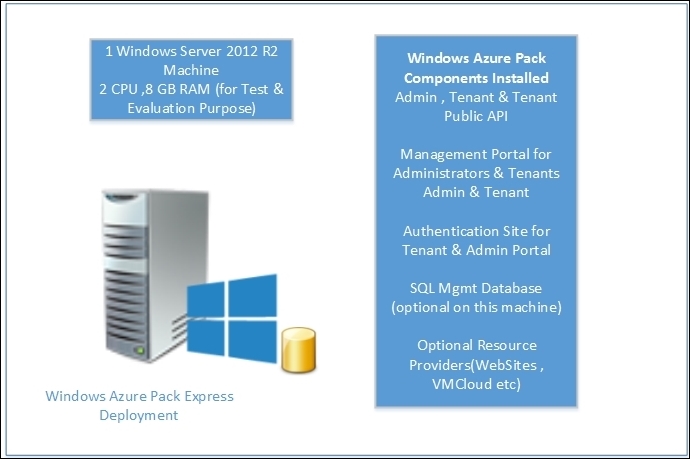 Express deployment is only for test and evaluation purposes and should not be used in a production environment.

Distributed deployment architecture enables installation of Windows Azure Pack roles on different servers for reliability and scalability. In this deployment model each component can be installed on a separate server or co-located with other roles as per functionality and requirement. Redundancy servers can be added for each role with load balancer to eliminate single point of failure at each layer.

In the following sample architecture, Windows Azure Pack components which will be accessed from the Internet (tenant admin portal, authentication site and tenant public API) are installed on three different servers in a separate network zone (aka DMZ Internet facing) which is separated with a firewall from other network zones. The rest of Windows Azure Pack mandatory components and Internet facing components are kept in separate network zone considering security best practices. All servers can be deployed as virtual machines on any Hypervisor hosts.

Hardware requirements, high availability and scalability for resource providers' servers to be in line with product specific guidelines are shown in the following screenshot: 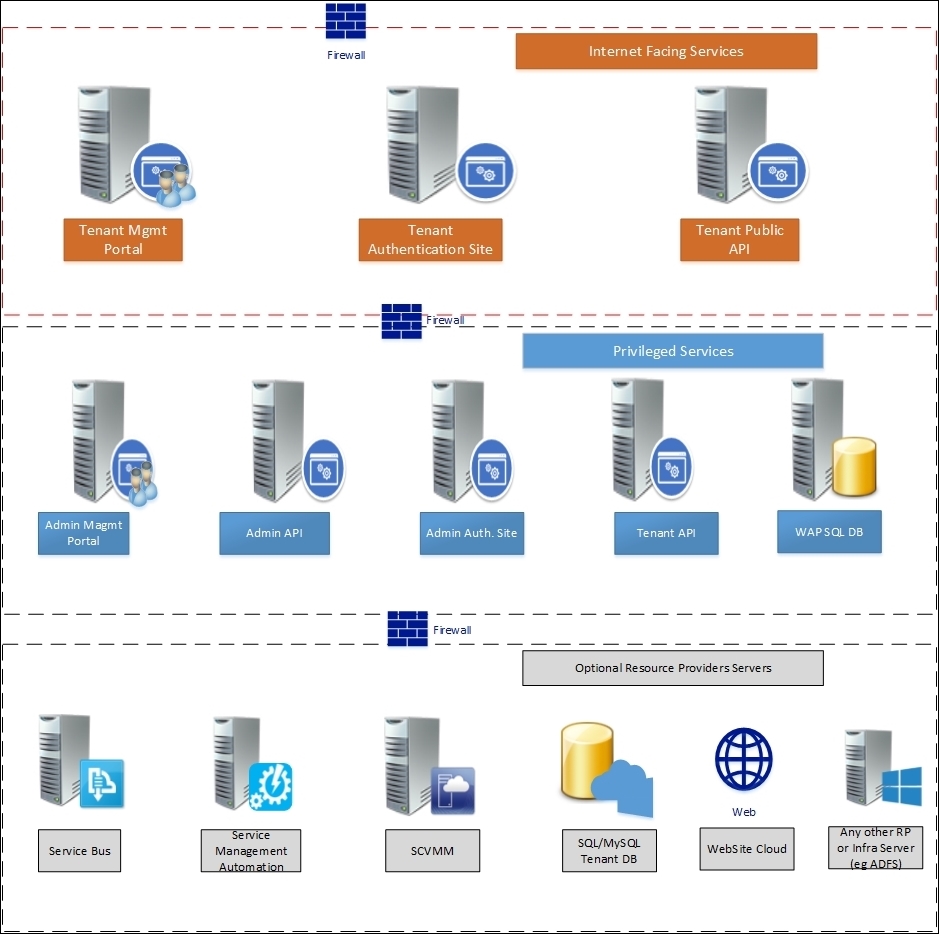 In all deployment models, standard Microsoft Infrastructure Services such as Active Directory, DNS and Fabric should be deployed as per product specific best practices. These architecture diagrams are limited to Windows Azure Pack components deployment. 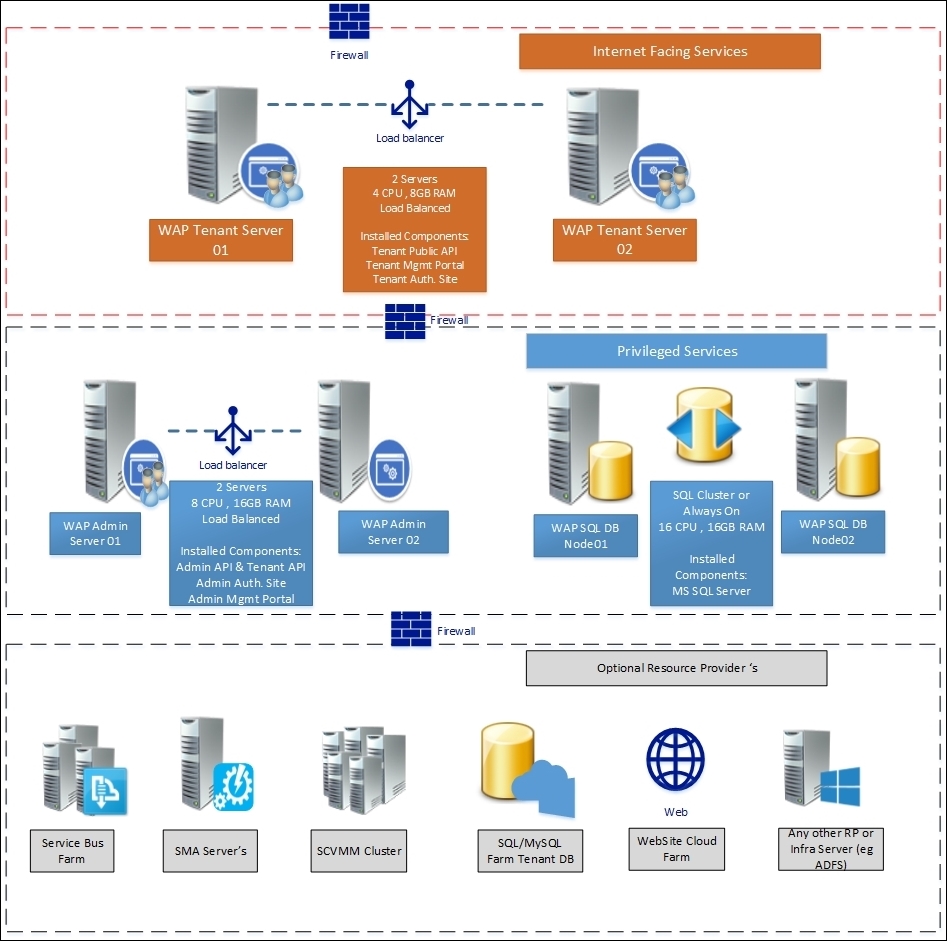 Windows Azure Pack tenant servers: Tenant servers includes management portal for tenants, tenant public API and tenant authentication site. Two servers are load balanced to provide resiliency and scalability. Since these servers will be Internet facing, they have to be placed in a DMZ network zone.

Two servers are load balanced to provide resiliency and scalability. Since these servers will not be Internet facing, they have to be placed in an internal network zone.

Resource providers sizing and availability best practices should be deployed as per product specific guidelines.

This architecture is suitable for SMB organizations and cloud providers as it provides minimal production deployment feasibility as well as customization possibilities in case of specific needs.

In this sample architecture, each component of Windows Azure Pack solution shall be deployed on separate dedicated servers along with redundancy to eliminate any single point of failure. This architecture is best suited for large scale enterprises and cloud service providers. The diagram that will come next illustrates the components deployment model and placement along with minimal configurations. 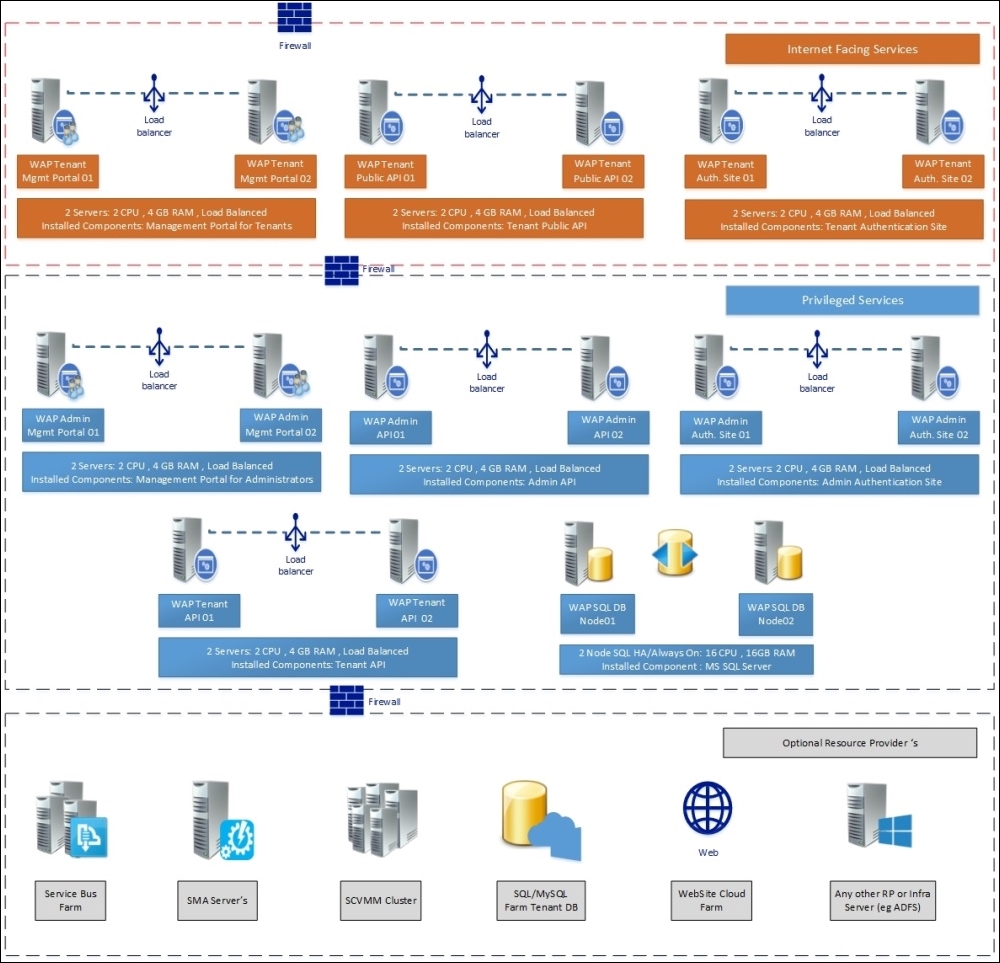 Scalability is one the most important aspects of any cloud solution. A cloud solution must support scalability without minimal changes and service disruption as soon as infrastructure size changes. Windows Azure Pack has capabilities to be scaled as and when required. Windows Azure Pack has to be deployed in a distributed model in order to support scaling; the best option would be having dedicate servers for each component in order to scale with minimal efforts.

In common scenarios scaling is required, particularly for tenant related components as tenant workload is likely to be increase with time.

There are some considerations which should be taken care of while scaling Windows Azure Pack deployment, as follows:

See product specific guidelines (such as SQL Servers, IIS, Service Bus, and so on) while scaling resource providers' workload infrastructures.

Other System Center product capabilities in a cloud management solution include:

In this chapter, we learned about Microsoft Cloud OS vision and how Windows Azure Pack contributes towards that. We got to know about capabilities and service offerings Windows Azure Pack provides along with an overview and functionalities of its architectural pieces.

In the next chapter we will setup the cloud fabric which will be utilized by Windows Azure Pack for cloud management and tenant workloads.