BlackBerry Smartphone was once the domain of jet-setting business users with power suits. Now you can hardly go anywhere without seeing someone using a BlackBerry to check their messages or make a call. It's this kind of explosive growth that makes the BlackBerry ecosystem a great place to develop and market applications through the BlackBerry App World store—this book shows you how to do just that!

This step-by-step guide gives you a hands-on experience of developing innovative Java applications for your BlackBerry. With the help of this book, you will learn to build your own applications to illustrate the platform, and the various capabilities that developers can use in their programs. It explores the powers of Blackberry and helps you develop professional and impressive Java applications.

The book teaches how to write rich, interactive, and smart BlackBerry applications in Java. It expects the readers to know Java but not Java Mobile or the BlackBerry APIs. We will learn to build rich, interactive, and smart Java applications for the BlackBerry. The book will cover UI programming, data storage, programming network, and internet API apps. As we move on, we will learn more about the BlackBerry's device features, such as messaging, GPS, multimedia, contacts and calendar, and so on.
This book also helps you build your own applications to illustrate the platform, and the various capabilities that developers can use in their programs.

The BlackBerry family of devices has long been the undisputed king of e-mail for business professionals. In recent years, the company that makes BlackBerry handhelds, Research In Motion (RIM)﻿, has been making devices targeted more towards consumers with devices such as the Storm and Pearl. Because of this shift the demand for quality applications has exploded in recent years. The creation of the BlackBerry App World has only fueled this growth and the size of the opportunity. According to recent statistics, the BlackBerry App World has the fewest number of titles and the highest average cost, all of which means there is a big opportunity here!

Now, with more than 28 million subscribers and 60 million devices manufactured, it is hard to go anywhere and not see someone using a BlackBerry. Maybe you see these numbers as a fertile market for your application, or maybe your company has long ago standardized on BlackBerry handhelds and you want to leverage that existing investment. Either way, you will learn how to tap into that potential and create custom applications for BlackBerry handhelds by using the object-oriented development experience you already have.

In this chapter, we shall:

Expectations of this book

This book is part of the Basic series which means we will start at the very beginning of the learning curve. We start with the simplest task of getting the right tools downloaded and installed. We then take you through to the final stages of putting the last finishing touches on your application and then submitting it to the BlackBerry App World so that the world can use it. Along the way, we will cover each of the major areas of application development: user interface, storage, connectivity, and interfacing with other applications in ways that are clear and useful.

There are a few things that we assume and that you should be familiar with before starting down this road. The first is an understanding of an object-oriented programming language. BlackBerry development is done using Java, but you don't need to be a Java expert to get started. Experience in C#, C++, or some other object-oriented language is enough to get started.

Most of what we do will use the BlackBerry-specific APIs, but there are times when an understanding of basic Java framework is important, such as when we need to use threads. For this I recommend having a Java book available as well.

The second is an understanding of general operating system concepts such as a file system, messaging, events, processes, and threading. The BlackBerry APIs actually do a very good job of hiding many of these details, but they are there and understanding them will help to understand the big picture.

BlackBerry handhelds, like many smartphones today, are very powerful in spite of their small size. The processing power and capabilities of these handhelds could accurately be described as smaller versions of our desktops or laptops. They have many strong capabilities yet have a small size that makes them convenient to carry around. This combination makes smartphones in general, and BlackBerry handhelds in particular, well suited for on-the-go applications.

But just what can they do? There are so many possibilities! Let's take a look at the general capabilities of BlackBerry handhelds﻿﻿.

Before we dive into developing an application we must choose the SDK version to work with. In most environments, this choice is very simple—just choose the most recent version and use that one. Unfortunately, things are not as simple for BlackBerry handhelds. In fact, it's the opposite.

There is a correlation between the handheld Operating System (OS) version and the SDK version﻿. Each time a new version of the device OS is released, a new version of the SDK is released to go along with it. As new devices are released and more capabilities are added to them, the OS must grow to take advantage of the new capabilities. Similarly, the SDK must also grow. It makes sense that SDK version 4.2 won't be able to utilize features added in OS version 4.5. The downside to this is that applications written using version 4.5 of the SDK won't run on handhelds with a version 4.2 OS, but the opposite is true. Applications written using 4.2 will run just fine on a handheld running version 4.5 of the OS.

Therefore, choosing the SDK version to work with becomes a matter of choosing the lowest common OS version for the devices you want to support or, more commonly, the features that they support.

While it is possible for a handheld to upgrade the OS from one version to the other it is rarely done and should never be assumed. Also, unfortunately, this can mean multiple code bases if you wish to support each device in a way that is specific to that device. It all depends on the application you want to write.

For the majority of the applications that we will make we will be using SDK version 4.5 simply because this is the version that comes bundled with Eclipse.

The following table lists devices, the OS version they were released with, and what important features are new to that version:

What you can expect

We do assume that you are familiar with an object-oriented programming language already. Syntactically and conceptually, Java is very similar to C# and even C++, so someone experienced in either of these languages should be able to make the transition to Java quickly.

This book starts at the very beginning with downloading and installing the tools necessary to start creating an application. This isn't quite as simple as performing a single install, but it's not too complex either.

In the next few chapters, we'll dive right in by loading and compiling one of the demo applications that comes with the tools. This gives you an opportunity to get more familiar with the development environment and by examining the typical "Hello World!" application in detail.

Then we start from scratch with a brand new empty project and create an application. This simple application is both very functional and very polished, which demonstrates how you can create applications quickly by leveraging the framework provided in the SDK.

We will look at this framework in detail by thoroughly examining all of the screen components available to you and by covering when each screen element is best employed. Many of these screen elements are common among all development languages and platforms, but many have behavior that is unique to BlackBerry and warrant the extra attention.

Once we have the screen elements well understood, it's time to branch out into other areas of the system and data storage is one of the most important areas to understand. One of the chapters focuses exclusively on data storage using each of the methods that are available for storing data on a handheld.

One thing that really makes developing for BlackBerry exciting is the ability to integrate with and leverage the existing applications that are present on every BlackBerry handheld. We will look at how to do this more closely, but this is an area so large that one chapter just isn't enough to do it justice. You will be well on your way by the end of it though!

Probably the most complicated and difficult area of the BlackBerry SDK is networking. We will tackle this topic head-on, giving both practical advice and examples for how to create networked applications.

We will also focus on a couple of areas that are interesting, but which aren't as applicable to some applications. The GPS receiver that is included in many new models of BlackBerry devices is one such area. Although both neat and powerful, not all applications can utilize this feature. The other area covered is truly an advanced topic called alternate entry point applications. These have many powerful uses though, one of which is demonstrated for a trivial but common effect that makes your application feel polished and professional. 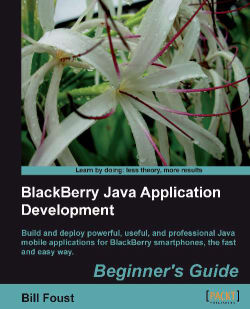