Wireless has become ubiquitous in today's world. The mobility and flexibility provided by it makes our lives more comfortable and productive. But this comes at a cost; wireless technologies are inherently insecure and can be easily broken. BackTrack is a penetration testing and security auditing distribution that comes with a myriad of wireless networking tools used to simulate network attacks and detect security loopholes.

Backtrack 5 Wireless Penetration Testing Beginner's Guide will take you through the journey of becoming a Wireless hacker. You will learn various wireless testing methodologies taught using live examples, which you will implement throughout this book. The engaging practical sessions very gradually grow in complexity giving you enough time to ramp up before you get to advanced wireless attacks.

This book will take you through the basic concepts in Wireless and creating a lab environment for your experiments to the business of different lab sessions in wireless security basics, slowly turn on the heat and move to more complicated scenarios, and finally end your journey by conducting bleeding edge wireless attacks in your lab.

If you were ever curious about what wireless security and hacking was all about, then this book will get you started by providing you with the knowledge and practical know-how to become a wireless hacker.

"If I had eight hours to chop down a tree, I'd spend six hours sharpening my axe."

Behind every successful execution is hours or days of preparation, and Wireless Penetration testing is no exception. In this chapter, we will create a wireless lab that we will use for our experiments in this book. Consider this lab as your preparation arena before you dive into the real-world penetration testing!

Wireless Penetration testing is a practical subject and it is important to first setup a lab where we can try out all the different experiments in this book in a safe and controlled environment. It is important that you set up this lab first before proceeding ahead in this book.

In this chapter, we shall look at the following:

So let the games begin!

We will need the following hardware to set up the wireless lab:

We will need the following software to set up the wireless lab:

It is important to note that even though we are using a Windows-based OS for our tests, the techniques learnt can be applied to any Wi-Fi capable devices such as Smart Phones and Tablets, among others.

Let us now quickly look at how to get up and running with BackTrack.

BackTrack will be installed on the laptop which will serve as the penetration tester's machine for the rest of the book.

BackTrack is relatively simple to install. We will run BackTrack by booting it as a Live DVD and then install it on the hard drive.

I will be changing the desktop theme and some settings for this book. Feel free to use your own themes and color settings!

We have successfully installed BackTrack on the laptop! We will use this laptop as the penetration tester's laptop for all other experiments in this book.

Have a go hero – installing BackTrack on Virtual Box

We can also install BackTrack within virtualization software such as Virtual Box. For readers who might not want to dedicate a full laptop to BackTrack, this is the best option. The installation process of BackTrack in Virtual Box is exactly the same. The only difference is the pre-setup, which you will have to create in Virtual Box. Have a go at it! You can download Virtual Box from http://www.virtualbox.org.

One of the other ways we can install and use BackTrack is via USB drives. This is particularly useful if you do not want to install on the hard drive but still want to store persistent data on your BackTrack instance, such as scripts and new tools. We would encourage you to try this out as well!

Now we will set up the access point. As mentioned earlier, we will be using the D-LINK DIR-615 Wireless N Router for all the experiments in this book. However, feel free to use any other access point. The basic principles of operation and usage remain the same.

Let us begin! We will set the access point up to use Open Authentication with an SSID of "Wireless Lab".

An easy way to verify this is to use the Wireless Configuration utility on Windows and observe the available networks using the Windows Laptop. You should find Wireless Lab as one of the networks in the listing: 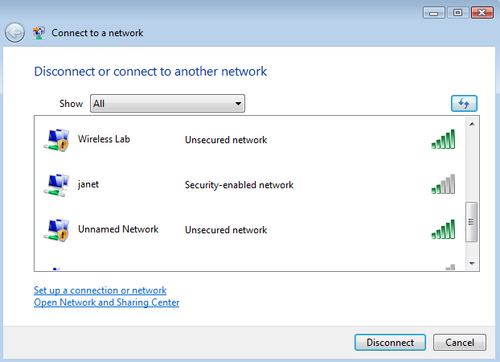 We have successfully set up our access point with an SSID Wireless Lab. It is broadcasting its presence and this is being picked up by our Windows laptop and others within the Radio Frequency (RF) range of the access point.

It is important to note that we have configured our access point in Open mode, which is the least secure. It is advisable not to connect this access point to the Internet for the time being, as anyone within the RF range will be able to use it to access the Internet.

Play around with the configuration options of your access point. Try to see if you can get it up and running using encryption schemes such as WEP and WPA/WPA2. We will use these modes in the later chapters to illustrate attacks against them.

Setting up the wireless card

Setting up our ALFA wireless card is much easier than the access point. The advantage is that BackTrack supports this card out-of-the-box, and ships with all requisite device drivers to enable packet injection and packet sniffing.

We will be using the Alfa wireless card with the penetration tester's laptop.

Please follow these instructions step-by-step to set up your card:

BackTrack ships with all the required drivers for the Alfa card. As soon as the machine booted, the card was recognized and was assigned the network interface wlan0. By default, all network interfaces in BackTrack are disabled on boot. We enabled the interface using the ifconfig command. Now our Alfa card is up and functional!

Now we will look at how to connect to the access point using the Alfa wireless card. Our access point has an SSID Wireless Lab and does not use any authentication.

Have a go hero – establishing connection in WEP configuration

Here is a challenging exercise for you—set up the access point in WEP configuration. For each of these, try establishing a connection with the access point using the wireless adapter. Hint: Check the manual for the iwconfig command by typing man iwconfig for how to configure the card to connect to WEP.

This chapter provided you with detailed instructions on how to set up your own wireless lab. Also, in the process, you have learned the basic steps towards:

It is important that you gain confidence in configuring the system. If not, it is advisable that you repeat these examples a couple of times. In later chapters, we will be designing more complicated scenarios.

In the next chapter, we will learn about the inherent insecurities in WLANs because of design. We will be using the network analyzer tool Wireshark to understand these concepts in a practical way. 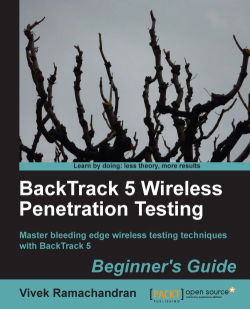