jQuery is a lightweight JavaScript library that has changed the landscape of client scripting in web applications. Developed by John Resig in 2006, it has taken the web by storm because of its cross-browser compatibility and the ability to get more done with less code. It has gained popularity with ASP.NET developers and is now distributed with Visual Studio and the NuGet package manager.

ASP.NET jQuery Cookbook explores the wide range of utilities that the jQuery library provides. It teaches you the nitty-gritty of plugging in these features in ASP.NET web applications. It covers every aspect of interfacing the library, right from downloading and including jQuery on web pages to selecting controls, handling events, and creating animations. This book also walks you through DOM traversal and manipulation in ASP.NET and then through visual effects and graphics in ASP.NET sites. It explores advanced features such as posting AJAX requests and writing plugins. It will provide you with all the information you need to use this library confidently with ASP.NET.


Chapter 1. Getting Started with jQuery in ASP.NET

As a web developer, you often require to include functionalities in your websites that make writing a client script in JavaScript inevitable. Getting the client script to produce the same response for all browsers has always been a challenge. jQuery helps you overcome this difficulty. In essence, jQuery is a powerful JavaScript library that works across all browsers, such as Internet Explorer (IE), Firefox, Safari, Chrome, Opera, iOS, and Android. It takes away the agony that developers face in order to maintain their client scripts across different platforms.

jQuery is popular not only because of its cross-browser support, but also because it is packed with features that developers can plug and play. It has changed the way developers write a client script. In addition to reducing the amount of code that needs to be written, it provides features for traversing the DOM, event handling, building animations, and AJAX, among many more.

This chapter deals with acquiring the library and other supporting files. It aims to cover different aspects of including and using jQuery in ASP.NET 4.6 web application projects, such as web forms and MVCs.

If you are familiar with downloading and including jQuery in your ASP.NET applications, you can skip this chapter and move on to recipes for manipulating controls in Chapter 2, Using jQuery Selectors with ASP.NET Controls.

This recipe explains how to download jQuery on your system along with the version/build to use and the supporting files that are required.

jQuery is available in two different major versions at the time of writing:

Though the Application Programming Interface (API) is the same for both major versions, the difference lies in the support offered for certain browsers. The 2.x line does not support old browsers, such as IE 6, 7, and 8, while the 1.x line continues with this support. So, if the end users of your application will not be using old browsers, you can download the 2.x version.

The jQuery library consists of a single JavaScript (.js) file and can be downloaded in the following formats:

To download the file, simply right-click on the required version, 1.x or 2.x, and the required format: uncompressed or compressed. Save the file in a location of your choice as shown in the following screenshot: 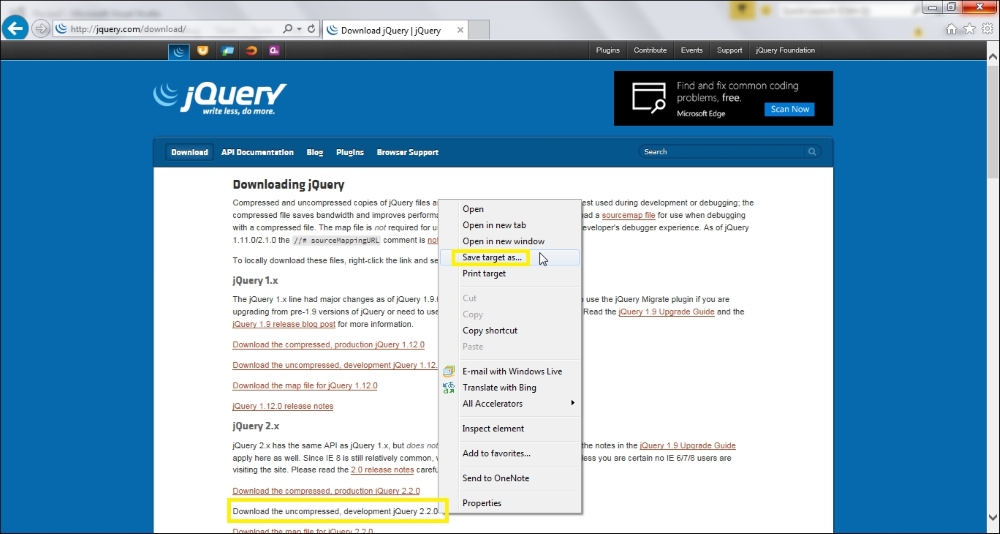 Note the following naming convention for the jQuery library:

On the download page, there is also a map file available with the .min.map extension. Sometimes, when bugs appear in the production environment necessitating troubleshooting, the use of the minified file for debugging can be difficult. The map file simplifies this process. It maps the compressed file back to its unbuilt state so that during debugging, the experience becomes similar to using the uncompressed version.

The Understanding CDN for jQuery recipe.

A Content Delivery Network (CDN) hosts content for users through large distributed systems. The advantage of using a CDN is to improve the performance. When using a CDN to retrieve the jQuery library, if the files have been downloaded earlier, they will not be re-downloaded. This can help you improve the response time.

The following CDNs are available for jQuery files:

To include jQuery on a web page, the URL of the respective CDN can be used so that files can be directly served from the CDN instead of using the local copies. The following table summarizes the respective CDN URLs for jQuery files:

Note that CDNs may not have the latest files when new versions of the jQuery library are launched since it usually takes a couple of days for third-parties to update their files. In the case of new releases, always check the available version before downloading them.

CDNs consist of servers situated in data centers in strategic locations across the globe. When a client requests a resource from a CDN, the server that is geographically closest to the client processes the request. These servers are also known as edge servers. In addition to this, edge servers have a caching mechanism to serve various assets. All this helps you improve the client's response time.

NuGet is a package manager available with Visual Studio. It simplifies the process of installing and upgrading packages. This recipe demonstrates the use of NuGet to download the jQuery library.

To launch NuGet for a particular project, go to Tools | NuGet Package Manager | Manage NuGet Packages for Solution... as shown in the following screenshot: 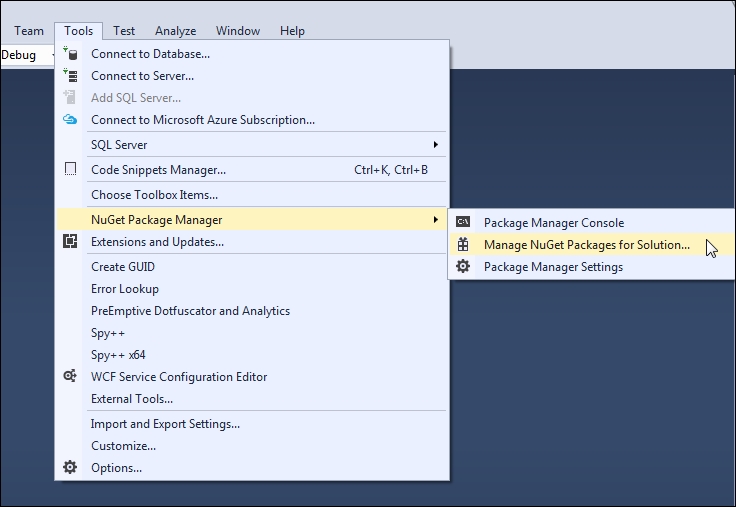 Alternatively, right-click on the project in the Solution Explorer tab, and select Manage NuGet Packages. 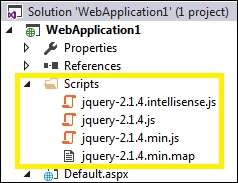 The files downloaded by NuGet are as follows (the version numbers may change in the future):

To create ASP.NET 4 .6 Web Applications, Visual Studio provides various ready templates such as Empty, Web Forms, MVC, Web API, and so on. This recipe will use the Empty template, which provides the developer with an empty project structure that consists of only the web.config file.

Following are the steps to create a project by using Empty template:

In the remaining recipes, when asked to create a Web Application project using the Empty template, follow the steps listed in this section.

Following are the steps to include jQuery using script block:

Adding jQuery to a web form using the script block has some disadvantages. If the application is upgraded to use the latest version of jQuery, all the web forms with the <script> tag require to be changed. Secondly, switching from the uncompressed version in the development environment to the compressed version in the release environment should be handled manually and is hence error-prone. Using the ASP.NET ScriptManager control helps you overcome this problem. It can also load jQuery directly from CDN instead of using the local copy.

Following are the steps to add jQuery to ASP.NET web project using the ScriptManager control:

This is how the ScriptManager control works:

A Master Page is an ASP.NET file with the .Master extension. It has a @Master directive at the top of the layout instead of the @Page directive in an ordinary .aspx page.

To incorporate jQuery in an ASP.NET Master Page, follow these steps:

On running the application, when the Default.aspx content page is loaded, the HTML markup from the Master page adds the reference to the jQuery library. This makes the content page jQuery-ready so that any jQuery code can be executed.

In addition to adding jQuery to web forms using the script block and the ScriptManager control, the code-behind file can also emit the required script code. This recipe will demonstrate how this can be done.

In the Page_Load event handler of Default.aspx.vb, use the RegisterClientScriptInclude method to generate a script block on the page, as follows:

For VB, the code is as follows:

For C#, the code is as follows:

The RegisterClientScriptInclude method requires two parameters: the key and URL. It adds the script block with the path to the jQuery library in the <form> element, as shown in the following screenshot. The Page.ResolveUrl method is used to return a URL relative to the site root:

So far, all examples have used the Empty template for the ASP.NET Web Application project. When using a non-empty built-in web application template, ASP.NET adds a reference to the jQuery library in the Master Page using the ScriptManager control. This recipe walks you through the important details of this mapping.

When you follow the preceding steps, this is how the web application is mapped to the jQuery library:

Until now, all recipes have demonstrated different ways to add the jQuery library to web pages. This is the first step in making the page jQuery-ready. In this recipe, let's move on to the next step: writing the jQuery code inside a script block to manipulate controls in a web form. We will display a simple Hello World message on the web page by manipulating a Label control on a web form.

Following are the steps to print Hello World!! in a web project using jQuery:

Model View Controller (MVC) is a design pattern that separates design (Model), presentation (View), and action (Controller). Because of its popularity with developers, Visual Studio provides ready templates that are used to create MVC projects.

Similar to web forms, jQuery can be included in MVC views using the <script> tag. In this example, however, let's take a look at the use of bundling for this purpose.

Bundling helps you reduce the number of HTTP requests made by the browser. It is a feature that allows style sheets, JavaScript, or other files to be combined together in a single file called a bundle. This combined file can be downloaded as one unit using a single HTTP request.

Follow these steps to bundle jQuery in ASP.NET MVC:

Bundling jQuery in ASP.NET MVC can be done by following these steps:

The Using a CDN to load jQuery in MVC recipe

Because of the advantages of using CDN in web applications, bundling also supports the loading of files directly from CDN. This recipe will explain how a MVC project can be configured to use CDN.

Following are the steps to load jQuery in MVC:

Following are the steps to load jQuery in MVC using CDN:

This recipe demonstrates how to write a simple jQuery code to display Hello World in the ASP.NET MVC project.

Use the MyMvcApplication project created in the Bundling jQuery in ASP.NET MVC recipe.

Following are the steps to write simple jQuery code:

Following are the steps to print Hello World in ASP.NET MVC using jQuery:

Debugging is inevitable for resolving bugs in the code during the development phase. Sometimes, bugs also slip into production. Visual Studio provides support for developers to debug the JavaScript code in the same manner as the server-side code. However, there is a limitation and debugging in Visual Studio can only be done using the Internet Explorer browser at present.

Debugging jQuery code in Visual Studio can be done by performing the following steps:

Make sure that you turn off debugging before launching the application in the production environment. An application that has debugging enabled has a slower performance since debugging generates additional information to enable the debugger to display the contents of variables. It also outputs more information to the call stack, which can become a security issue in the production environment.

The Hello World in a web project using jQuery recipe 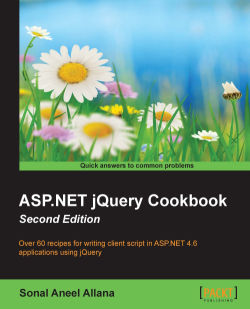