Apache Cassandra Essentials takes you step-by-step from from the basics of installation to advanced installation options and database design techniques. It gives you all the information you need to effectively design a well distributed and high performance database. You’ll get to know about the steps that are performed by a Cassandra node when you execute a read/write query, which is essential to properly maintain of a Cassandra cluster and to debug any issues. Next, you’ll discover how to integrate a Cassandra driver in your applications and perform read/write operations. Finally, you’ll learn about the various tools provided by Cassandra for serviceability aspects such as logging, metrics, backup, and recovery.


Chapter 1. Getting Your Cassandra Cluster Ready

In this chapter, you'll learn how to set up and run our own Cassandra cluster. We'll look at the prerequisites that need to be considered before setting up a Cassandra cluster. We'll also see a Cassandra installation layout, so that we can easily locate different configuration files, tools, and utilities later on. We will discuss key configuration options that are required for cluster deployment. Then, we'll run our cluster and use Cassandra tools to verify our cluster status, some stats, and its version.

The following are the prerequisites for installing Cassandra:

Compiling Cassandra from source and installing

The following method of installation is less used. One of the cases when we might use this method is if we're doing some optimization work on Cassandra. We'll need JDK 1.7, ANT 1.8, or later versions to compile the Cassandra code. Optionally, we can directly clone from the Cassandra Git repository or we can use the source tarball. Git client 1.7 will be required for cloning git repo.

To obtain the latest source code from Git, use the following command:

For a specific branch, use the following command:

Use this command for version 1.2:

Then, use the ant command to build the code:

Alternatively, if a proxy is needed to connect to the Internet, use the autoproxy flag:

Installation from a precompiled binary

Download a binary tarball from the Apache website; open it using the following command. Here, we will extract it in the /opt directory:

Optionally, you can create a soft link as a best practice, which will help in scenarios where you need to change the installation location:

In older versions of Cassandra, you might need to create Cassandra log and data directories before running; by default, they are pointed to /var/lib/cassandra and /var/log/Cassandra. Running Cassandra will fail if the user running Cassandra doesn't have permissions for these paths. You can create and set permissions as shown here:

The tarball installation layout is different from RPM or Debian packages. Let's see how they differ.

The directory layout in tarball installations

The following table shows the list of directories and their description:

The directory layout in package-based installation

The following table describes the installation layout if you use RPM or Debian packages:

Now, let's look at some key configuration files and the options that we can configure in them:

The configuration files are as follows:

Now that we know the prerequisites, let's quickly check the language dependencies:

We can check the Java version using the following code:

The Python version can be checked using this command:

Since we're running only single node, we can skip configurations and directly start our node. Run the Cassandra node using the command for tarball installation:

We can stop the server by using the following command:

Sometimes, we might want to run a Cassandra node in the foreground for debugging purposes, then we'll run it with –f flag:

For package-based installations, use the following commands to start and stop, respectively:

Since we used the default Cassandra configuration, our node is running on the local interface and we'll not be able to connect to it from outside this machine using clients, for example, Java driver or other CQL clients.

Setting up the cluster 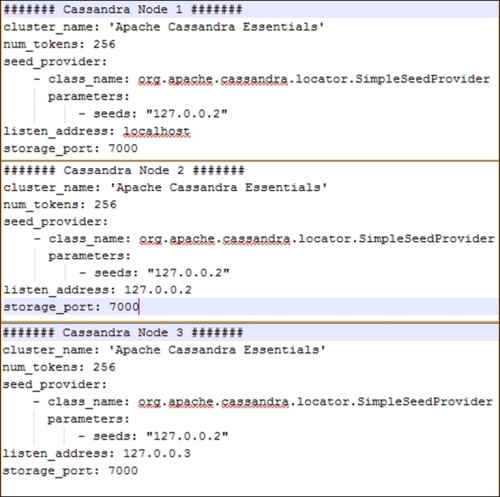 Since all our nodes are the same from a hardware configuration perspective, we used num_tokens: 256 for all of them. The second node with an IP address of 127.0.0.2 acts as a seed node.

Additionally, we can set rpc_address and native_transport_ports for each node so that our Java client can connect to our nodes.

Now, we'll run the Cassandra server on each node using as discussed in the previous section, and our cluster with three nodes is ready.

Now that our cluster is up and running, let's check its status. We can use the Cassandra tool called nodetool to check the status:

The first character in the status, which is U in our example, denotes the node's status whether it is Up (U) or Down (D). The second character tells us about the state of the joining cluster; it can be Normal (N), Leaving (L), Joining (J), or Moving (M). In our example, every node in the cluster is Up (U) and in the Normal (N) state. So, the first column is UN for each node. It also tells us about the data center in which our node lies. In our example, all the nodes lie in 'DataCenter 1' and rack 'rack1'.

Now, let's use the nodetool info command to check the individual node statistics such as its uptime, caching details, load details, and so on. We'll discuss Cassandra caching in detail in Chapter 4, Read and Write – Behind the Scenes:

Cassandra can be installed via various methods. We can install it on different platforms based on our requirements. However, platforms based on *NIX are very popular for production deployments. While deploying, we should consider various configuration options based on our deployment type. There are the configuration options that are used for performance tuning; we'll uncover more options later. The Cassandra nodetool is very handy to monitor and debug clusters and column families. We discussed some of them in this chapter.

In the next chapter, we'll see more of the nodetool options in more detail. 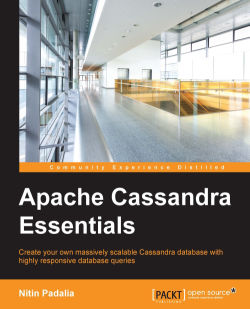