Software development is becoming increasingly complex due to the various software components used. Applications need to be packaged with software components to facilitate their operations, making it complicated to run them. With Docker Compose, a single command can set up your application and the needed dependencies.

This book starts with an overview of Docker Compose and its usage and then shows how to create an application. You will also get to grips with the fundamentals of Docker volumes and network, along with Compose commands, their purpose, and use cases. Next, you will set up databases for daily usage using Compose and, leveraging Docker networking, you will establish communication between microservices. You will also run entire stacks locally on Compose, simulate production environments, and enhance CI/CD jobs using Docker Compose. Later chapters will show you how to benefit from Docker Compose for production deployments, provision infrastructure on public clouds such as AWS and Azure, and wrap up with Compose deployments on said infrastructure.

By the end of this book, you will have learned how to effectively utilize Docker Compose for day-to-day development. 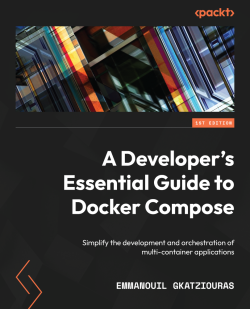