3D modeling in Blender can get extremely tedious, especially when you have to animate a lot of frames. If you want to perfect your animations rather than spend loads of time on your models, then we’ve got you covered with A 3D Artist’s Guide to Learning Low Poly Modeling in Blender.

This book takes you on an exciting journey from the basics of low poly modeling in Blender to creating a simple animation with your low poly assets. You’ll apply the skills you learn to build a low poly farm scene, complete with animals, people, vehicles, and furniture. You’ll learn the important design aspects of each element in the scene, from the vegetation to the hairstyles of the characters! Once the scene is built, you’ll take a look at Blender’s two rendering engines, Cycles and EEVEE, so that you can see the practical differences between them. Then you’ll animate the characters, bringing the scene to life! The book concludes with some advice on making your way in the 3D industry and accelerating your career as a 3D artist.

By the end of this book, you will be creating and animating 3D scenes in Blender faster than ever before, thanks to the power of low poly modeling. 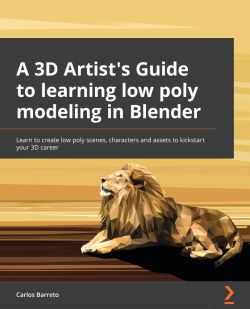