This updated second edition of the Zabbix 6 IT Infrastructure Monitoring Cookbook brings you new recipes, updated with Zabbix 6 functionality. You'll learn how to set up Zabbix with built-in high availability, use the improved Business Service Monitoring, set up automatic reporting, and create advanced triggers. Zabbix offers useful insights into your infrastructure performance and issues and enables you to enhance your monitoring setup with its powerful features. This book covers hands-on, easy-to-follow recipes for using Zabbix 6 to monitor effectively the performance of devices and applications over the network.

You'll start by working your way through the installation and most prominent features of Zabbix and make the right design choices for building a scalable and easily manageable environment. This Zabbix book contains recipes for building items and triggers for different types of monitoring, building templates, and using Zabbix proxies. Next, you'll use the Zabbix API for customization and manage your Zabbix server and database efficiently. Finally, you'll find quick solutions to the common and not-so-common problems that you may encounter in your Zabbix monitoring work.

By the end of this book, you'll be able to use Zabbix for all your monitoring needs and build a solid Zabbix setup by leveraging its key functionalities.

In this chapter, we will work on creating our first user groups, users, and user roles. It's very important to set these up in the correct manner, as they will give people access to your Zabbix environment with the correct permissions. By going over these things step by step, we will make sure we have a structured Zabbix setup before continuing on with this book.

As a bonus, we will also set up some advanced user authentication using SAML to make things easier for your Zabbix users and provide them with a way to use the login credentials they might already be using throughout your company. We will go over all these steps in order of the following recipes:

We can do all of the work in this chapter with any installed Zabbix setup. If you haven't installed Zabbix yet, check out the previous chapter to learn how to do so. We will go through our Zabbix setup to get everything ready for our users to start logging in and using the Zabbix frontend.

To log in to the Zabbix frontend, we are going to need users. Right now, we are logged in with the default user, which is logical because we need a user to create users. This isn't a safe setup though, because we don't want to keep using zabbix as a password. So, we are going to learn how to create new users and group them accordingly.

It's important to choose how you want to manage users in Zabbix before setting up user accounts. If you want to use something such as LDAP or SAML, it's a smart idea to make the choice to use one of those authentication methods right away, so you won't have any migration trouble.

Now that we know how the Zabbix UI is structured and we know how to navigate it, we can start doing some actual configuration. We'll start out by creating some user groups to get familiar with the process and start using them. This way, our Zabbix setup gets not only more structured but also more secure.

To get started with this, we'll need a Zabbix server like the one we used in the previous recipes and the knowledge we've acquired there to navigate to the correct frontend sections.

Looking at the following figure, we can see how our example company, Cloud Hoster, is set up. We will create the users seen in the diagram to create a structured and solid user setup: 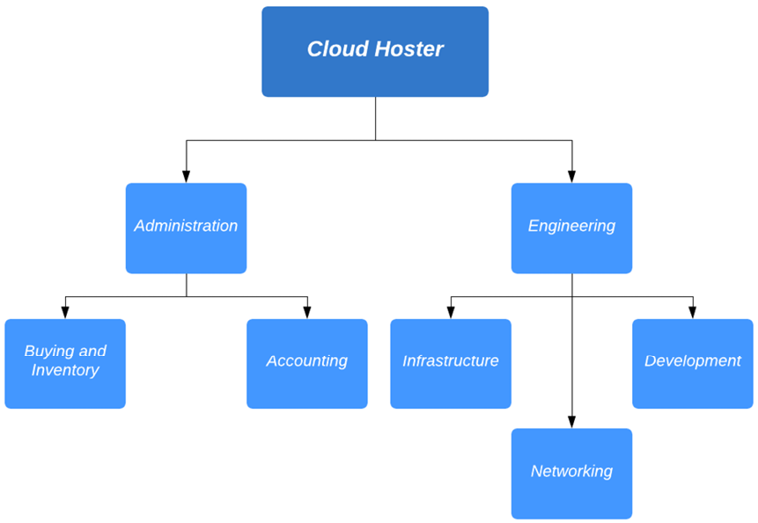 Let's get started with creating these three groups in our Zabbix UI: 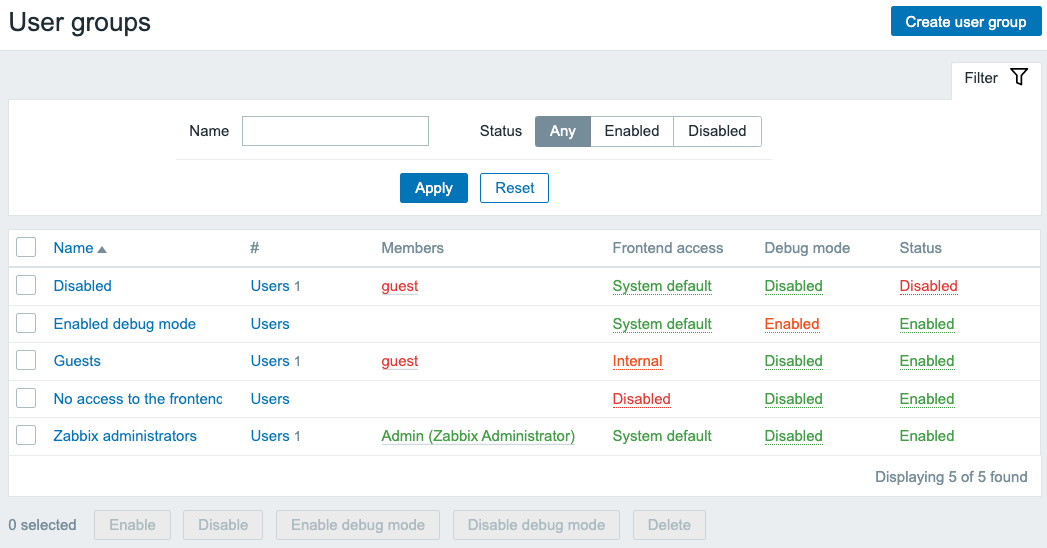 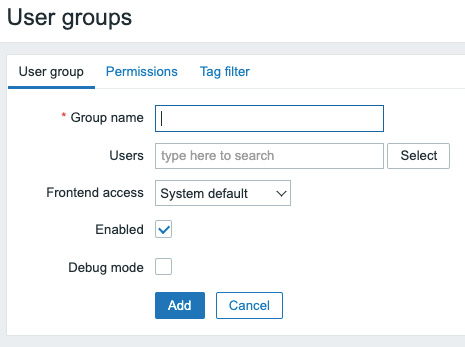 We will need to fill in the information, starting with Group name, which of course will be Networking. There are no users for this group yet, so we'll skip that one. Frontend access is the option to provide us with authentication; if you select LDAP here, LDAP authentication will be used for authenticating. We will keep it as System default, which is the internal Zabbix authentication.

Here, we can specify what host groups our group will have access to. There's a default host group for Networking already, which we will use in this example.

Now we will have a new host group called Networking that is only allowed to read and write to the Templates/Network devices host group: 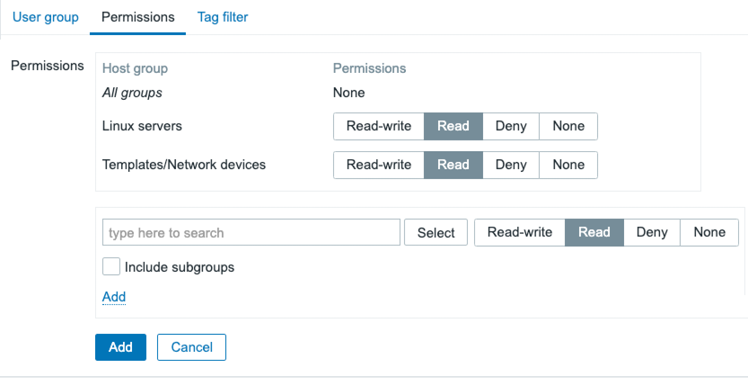 Congratulations! Finishing this means you've ended up with three different host groups and we can continue to create our first new users! Let's get to it.

Zabbix user groups are quite extensive and there is a lot more to it than there seems at first. As the entire permission system is based on what user group(s) and user role(s) you are part of, it is always a good idea to read the Zabbix documentation first: https://www.zabbix.com/documentation/current/en/manual/config/users_and_usergroups/usergroup.

New functionality has been introduced to this Zabbix 6.0 LTS release. It is now possible to create your own user roles in Zabbix. In older Zabbix versions, we had the ability to assign one of three user types:

What these user types did in earlier releases was restrict what Zabbix users could see in the frontend. This was always pre-defined though. Now with the addition of user roles that we can create ourselves, we can set up our own frontend-related restrictions, making it possible to only show certain parts of the UI to certain Zabbix users, while still respecting the permissions set up using user groups.

For this recipe, we will need a Zabbix server, preferably the one set up in the previous recipe. In the previous recipe, we set up different user groups, to provide for different permissions on host groups. Completely separate from the user group, we will apply certain user roles to our users to determine what they can see in the UI. Let's check out how to set up our user roles. 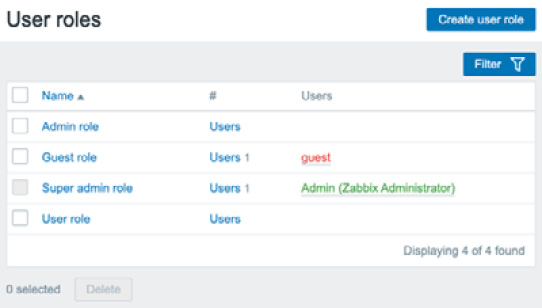 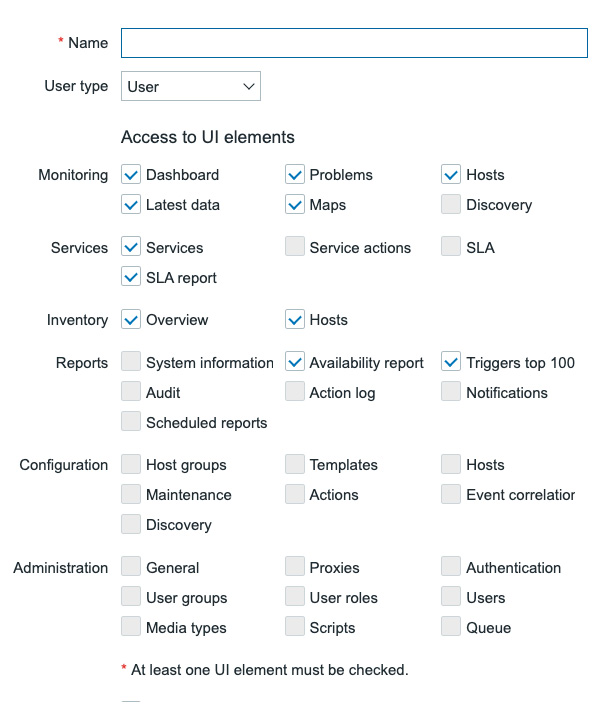 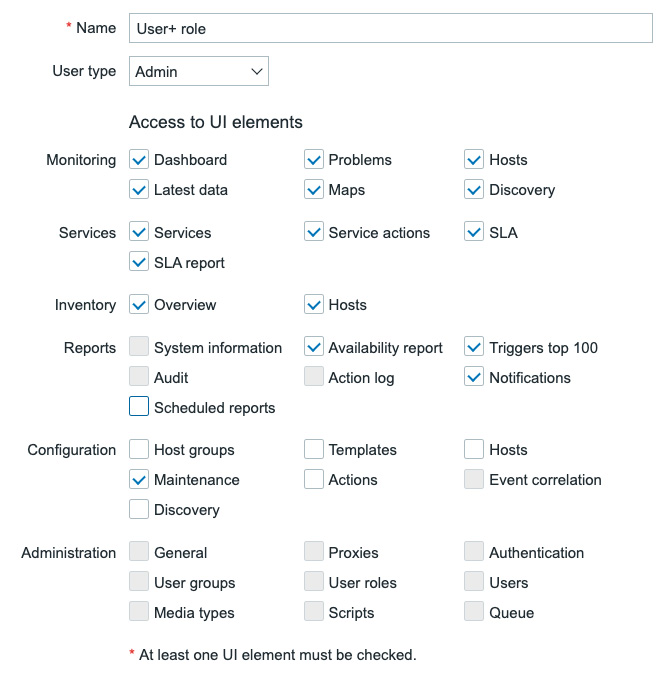 Figure 2.10 – A new Zabbix User+ role with access to Maintenance 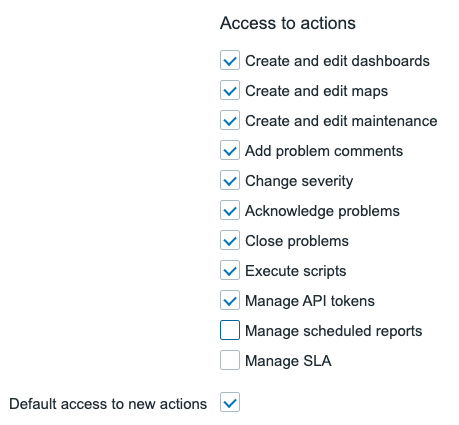 First, let's break down the options we have when creating user roles in Zabbix: 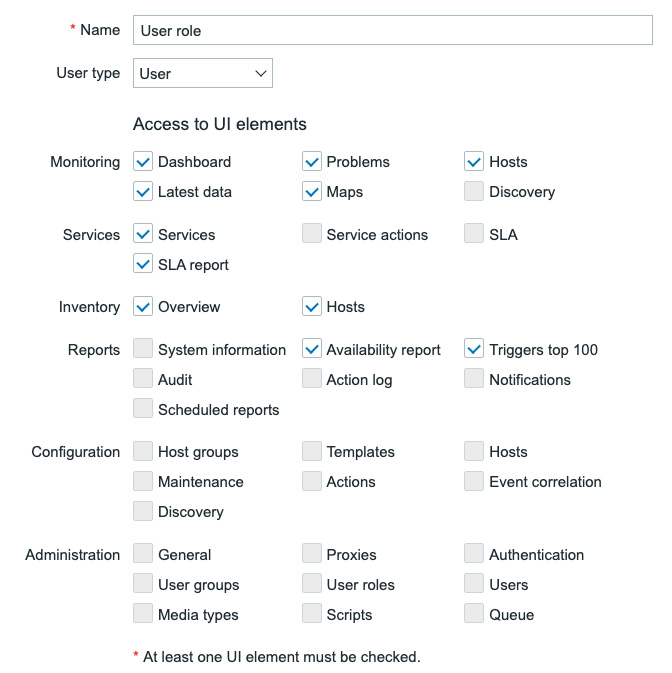 By default, we have three user roles in Zabbix 6, which mirror the user types that are available. The user role we see here in Name mirrors the user type we have called User. It gives us access to the UI elements seen above, restricting the user role called User role to only be able to see certain things and make no configuration changes.

For example, it's considered an impactful permission to be able to set Maintenance. Because of course, you could restrict important notifications by setting Maintenance. But here comes the catch, what if you explicitly want a Zabbix user to only be able to read information but still not have access to configuration pages? In Zabbix 5.0, this wasn't possible because you could only select the User, Admin, or Super admin type, immediately giving access to the entire configuration section when using the Admin and Super admin user types.

Now, let's see what we did by creating a new user role called User+ role: 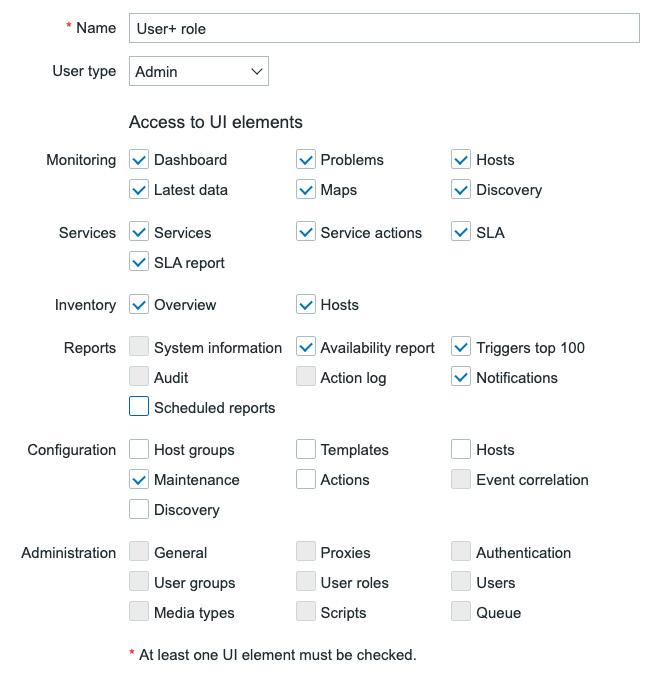 Here, we can see what happens if we change the user type to Admin but do not select all the available Access to UI elements. We now have a user role with no access to important configuration pages, but with access to Maintenance.

When we assign this role to a user in the next recipe and log in to that user, we will be able to see the following in our Zabbix sidebar.

This, of course, is just one of the many types of configurations you can use. You have the ability to allow Zabbix users access to menus and options through a number of parameters under a bunch of custom user roles. You are free to set this up however you feel like, adding a lot of user flexibility within Zabbix.

Zabbix is currently in the process of working out user roles further, meaning that some parts might still be missing or you might see issues with them. As it is a new feature, it is constantly being improved and extended. Check out the Zabbix documentation for more information regarding this feature: https://www.zabbix.com/documentation/current/en/manual/web_interface/frontend_sections/administration/user_roles.

To get started, we'll need the server and the newly created user groups from the last recipe. So, let's start the configuration. 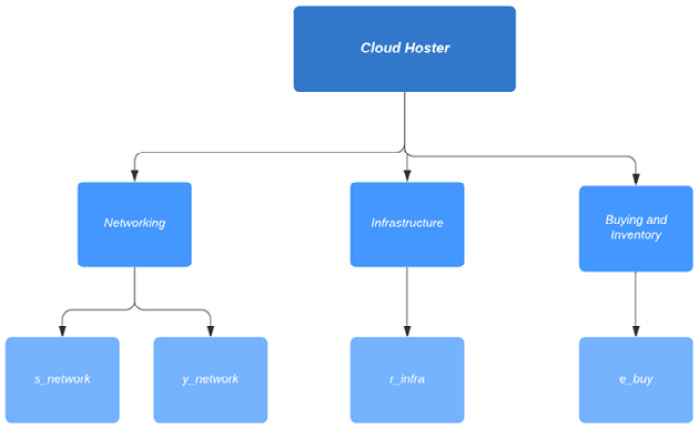 These are the users we need to configure for Cloud Hoster to use.

Let's start creating the users. We will start with our Networking department: 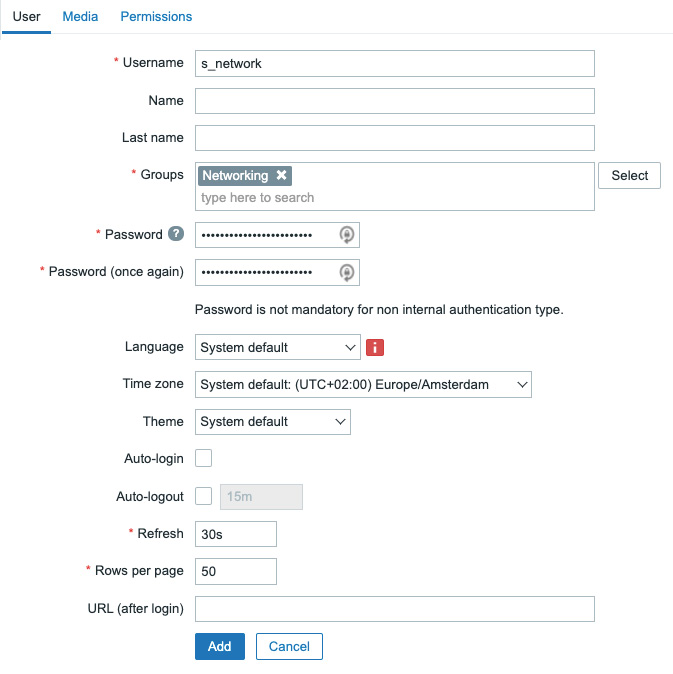 The following user roles are available in Zabbix by default: 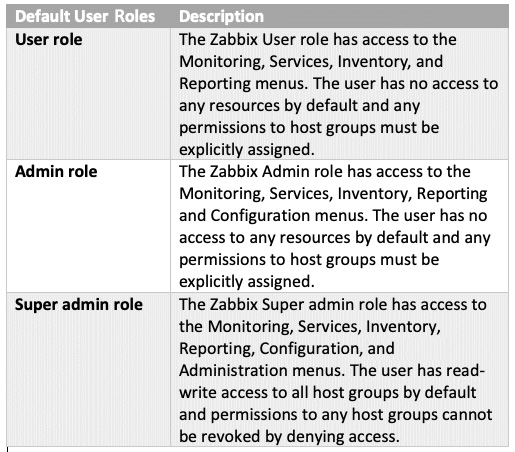 After creating these two users, let's move on to create the infrastructure user, r_ infra. Repeat the steps we took for s_network, changing the Username, of course. Then, add this user to the group and give our user the right permissions. Click Select and pick our group called Infrastructure. It will look like this: 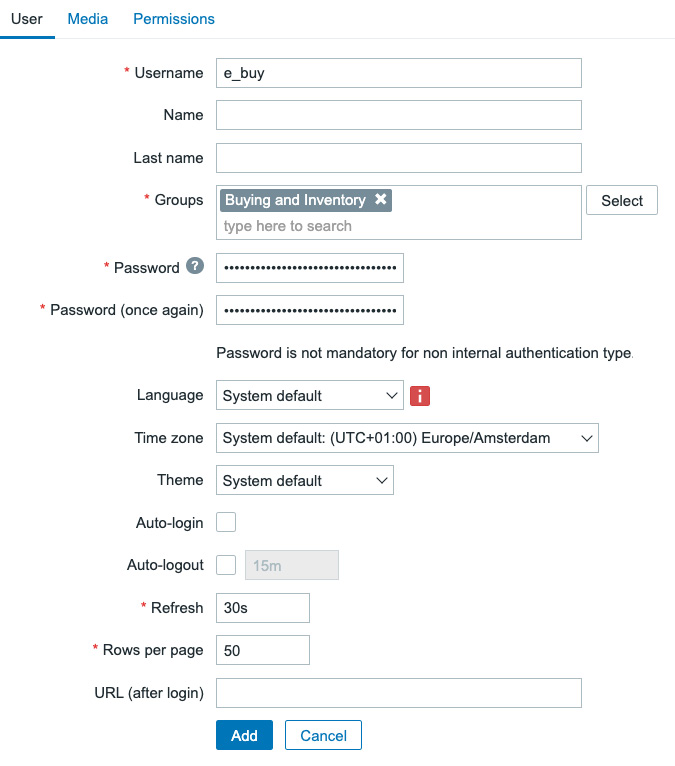 Setting the user up with the User+ role will also let the user e_buy create maintenance periods.

When you're done, you'll end up with the following:

In this recipe, we will use SAML authentication, a widely used form of authentication in the IT world. We'll be using this as a form of managing passwords for our Zabbix users. Please note that if you've worked with Zabbix before and you've configured LDAP, SAML, like LDAP, allows user authentication with passwords. You still have to create users with their permissions.

We will be using the s_network user as an example:

These are our user details:

To set up SAML, retrieve your SAML settings from your AD or another SAML provider. To work with Zabbix, we will need the following:

Now that we have our Azure AD ready, let's see how we can configure SAML using our setup: 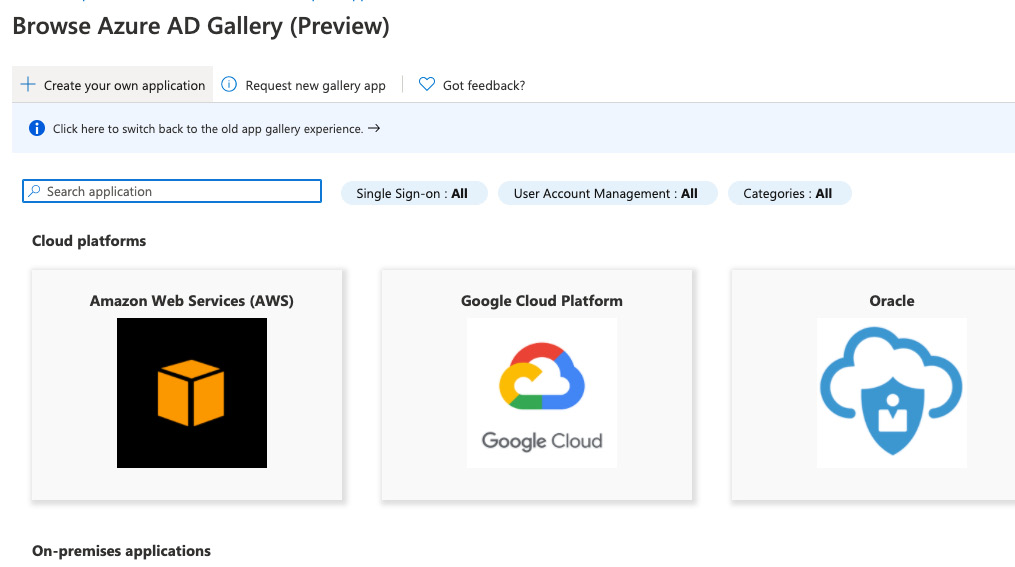 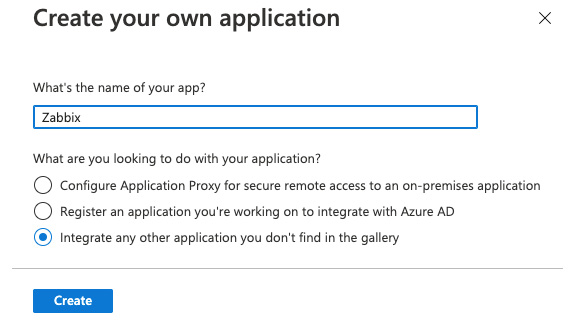 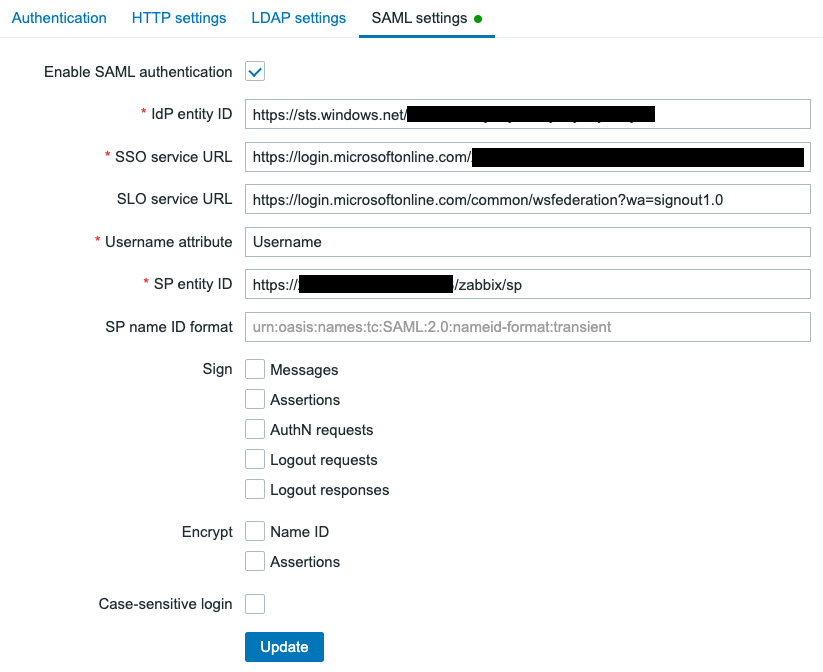 Figure 2.35 – The Zabbix edit user screen for our SAML setup 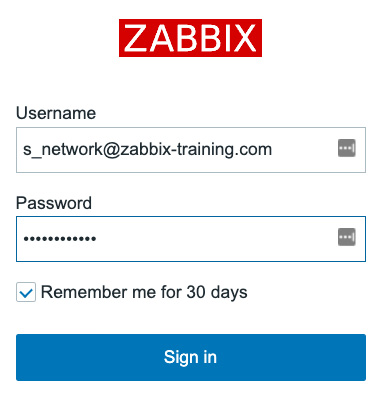 This way, we can make sure it is easier for users to keep their passwords centralized in medium to big office environments:

Zabbix communicates with our Azure AD SAML component when we click the Sign in button. The user is then authenticated against your Azure AD user and a confirmation is sent back to the Zabbix server. Congratulations, you are now logged in to your Zabbix server!

We can do this kind of authentication not only with SAML but also with HTTP and LDAP. This way, you can choose the right form of advanced authentication for your organization.

Check out the Zabbix documentation for more information on the different forms of authentication:

It's also possible to work with an identity provider such as Okta, OneLogin, or any other. Meaning your options aren't limited to Azure AD, as long as it supports SAML you can use it to authenticate against your Zabbix server. 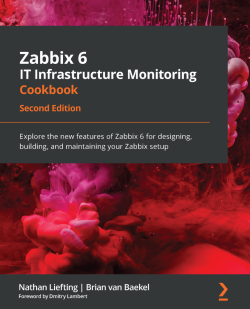