Microsoft Power Automate is a workflow automation solution included in Microsoft 365. This book explores the core concepts of workflow automation, such as working with connectors, triggers, and actions, along with their practical implementation in automating business tasks and simplifying digital processes to boost enterprise productivity.

Business activities in the information age are filled with repetitive tasks: receive an email, generate a purchase order, send a message, route a document, approve a time-off request. In many cases, these activities don't generate real value, though they do need to get done to help support business goals.

Computers introduced the promise of helping us do more, but a lot of that has resulted in there being more to do in order to get the same value. What if we could use technology to handle routine tasks and save our strength for doing the things that require skill and thinking?

In this book, we're going to learn the basics of Microsoft Power Automate, a tool designed to help you automate repetitive tasks and get you back to generating value.

This chapter focuses on getting an understanding of some of the basic concepts of Power Automate:

By the end of this chapter, you should have an understanding of the components of Power Automate and how they can be used to streamline daily operations.

What is Power Automate?

Power Automate, part of the Power Platform family of products, is a workflow engine that can be used to automate common business processes or sequences based on a number of conditions or scenarios. Power Automate (formerly known as Microsoft Flow) is a web-based tool designed to interface with a growing library of software from both Microsoft and other vendors.

While some organizations (or even vendors) have created bridge or integration packages to tie SharePoint workflows to external products, many of them are limited to interfacing with data inside SharePoint.

This is the power of the Power Automate platform—it has native connectivity to hundreds of applications out of the box. It's also extensible, meaning you can develop your own connectivity solutions to work with your custom apps. You can even use HTTP to interact with nearly any REST-based interface for any application. Power Automate's capabilities are limited only by your imagination and the services offered by the applications you wish to integrate.

In the following diagram, a sample purchase order workflow ties together the SharePoint, Outlook, and Microsoft Approvals apps: 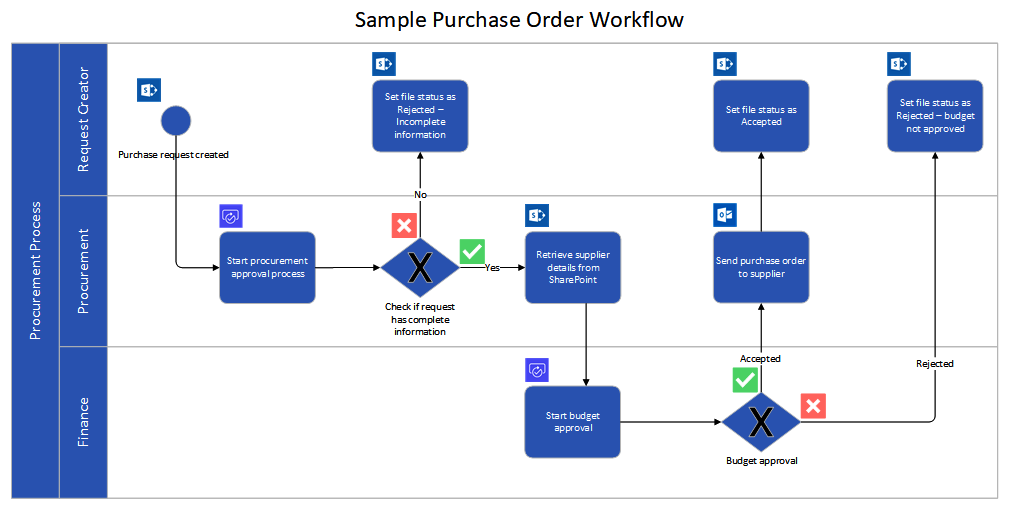 Choosing what to automate

From both the administrative and end user perspectives, there are a number of activities, processes, and tasks in Office 365 and other line-of-business applications that can be automated through the use of Power Automate.

Automation is a key business technology to reduce the impact of repetitive, low-skill tasks on the workforce. Consider the following diagram: 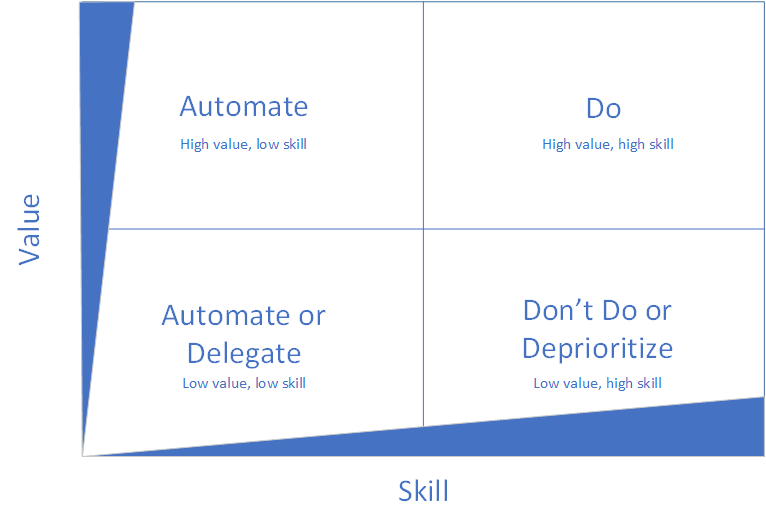 When looking at business processes, they can generally be divided into one of the four quadrants:

As you examine tasks in your daily routine, you can evaluate them against the preceding matrix to help understand whether it is something that can or should be automated. Items that fall into the "low skill" quadrants are very good candidates for automation.

Look at the following examples:

In the upcoming sections and chapters, we're going to get familiar with the terminology and interface of Power Automate, and then learn how to connect to common applications to solve business problems.

You've already seen a few terms, and if you're familiar with SharePoint or other collaboration tools, they may be recognizable. But just to make sure we have a solid foundation on which to build, we're going to go over some basic terminology, and then we'll start getting into specific Power Automate terminology.

A business process is any sequence of tasks needed to accomplish the business's purpose. This may be something as simple as submitting a time card or getting a signature on a purchase order. Business processes generally fall into three categories:

Automation can be used with processes in all of these categories. Power Automate can be used to automate some or all parts of many types of business processes.

Power Automate can be used to automate some or all parts of a workflow.

REST is an industry acronym for REpresentational State Transfer. It is used to describe a method for interacting with computer systems. In a REST-based system, client devices generally send HTTP verbs (or actions) to a target system uniform resource identifier (URI) to input or retrieve data.

For more information on the history and design principles of REST architectures, refer to https://restfulapi.net/.

Like many technologies on the Microsoft 365 platform, Power Automate utilizes REST to enable a high volume of performant transactions.

As we begin working with Power Automate, it will be important to understand the core terminology that is being used. You'll need to be able to differentiate between the following terms so you can choose where to apply the correct business logic and processes.

Flow is simply the logical grouping of connectors, triggers, conditions, and actions used to automate actions. Flows are currently divided into the following categories:

Each flow has different use cases, triggers, and configuration capabilities.

Connectors are the components that are used to directly interface with both source and target systems. Connectors contain the information required to interact with applications. Examples of connectors are shown in the following screenshot: 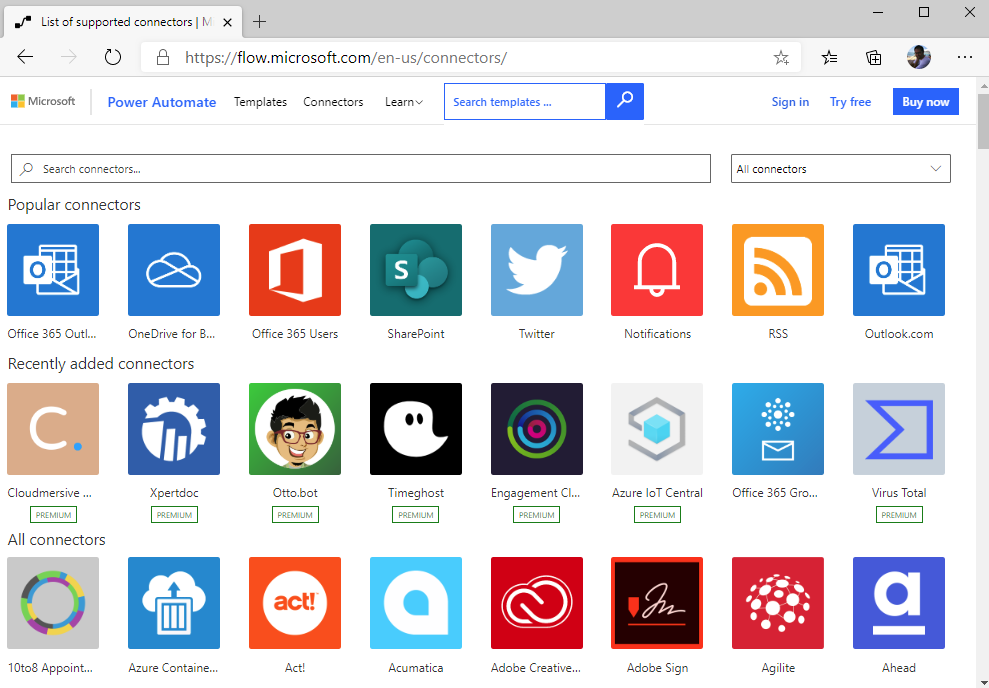 Triggers are the activities that cause the flow to begin. The core types of triggers are as follows:

The available triggers may depend on which connectors are being used.

Actions describe the types of activities performed by a flow (such as copying a file, posting to a Teams channel, or sending an email).

Branching is used to describe the concept of different series of business logic or actions that can happen. Branches may be invoked through the use of conditions (in the form of the if-then construct) or through the use of parallel branches (different sets of actions or logic that are simultaneously executed).

Conditions are used to evaluate and select the circumstances under which actions will be performed. Conditions may take the form of time or schedule constraints, values received through user input or reading files, or other calculated values. Conditions can lead to branches or different sets of logic that can be executed depending on the results of items as they are evaluated. 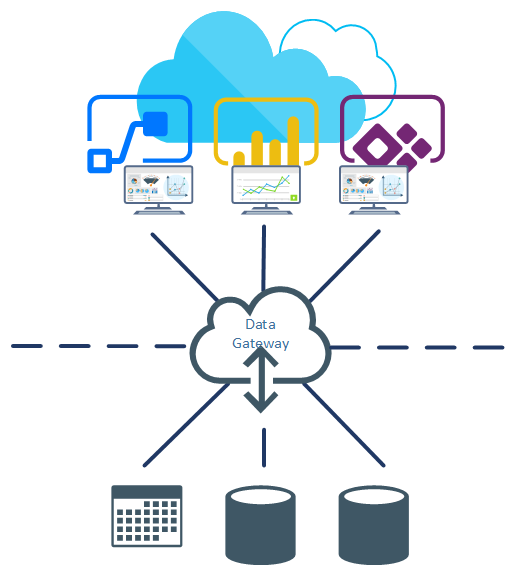 The data gateway, shown in the previous diagram, acts as a conduit between the on-premises data sources and Power Platform services (such as Power Automate, Power BI, and Power Apps).

Steps are the individual evaluations and actions that a flow executes. Steps are ordered in a methodical manner. Here are some examples of steps:

Every flow is made up of one or more steps.

A template comprises a set of connectors, triggers, and actions designed to accomplish a predefined purpose. Templates allow standardized deployments and the reuse of common components and configurations. Templates also allow you to be able to create flows in sandbox or test environments and then export and deploy them in production environments, mitigating the potential risks of a misconfigured flow.

Understanding the terminology, both business- and Power Automate-specific, will help you as we move toward creating flows.

In this chapter, we discussed the high-level concepts of Power Automate, including how it relates to solving problems (such as business processes or workflows). We also covered introductory knowledge concepts such as actions, triggers, and conditions, and how they work together to produce desired outcomes. Understanding the types of triggers and connectors will help you design flows and business processes that reduce repetitive work and produce value in your organization.

In the next chapter, we're going to begin exploring the Power Automate interface and use it to create simple flows.

Read more Unlock this book with a 7 day free trial.
About the Author
Solid book with great examples. I use it as the basis for automating my workflow. 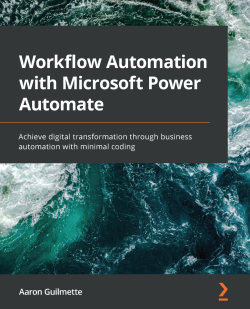