Windows Terminal is a new and open-source command-line application for Windows 10, built for the Command Prompt, PowerShell, Windows Subsystem for Linux, and more. It's fast, modern, and configurable thanks to its GPU-accelerated rendering, excellent UTF-8 support, and JSON-based configurability, and this book can help you learn how to leverage these features.

You’ll start by learning the benefits of Windows Terminal and its open-source development, as well as how to use the built-in tabs, panes, and key bindings to build your own efficient terminal workflows. After you’ve mastered Windows Terminal, this book shows how to use and configure PowerShell Core and the Windows Subsystem for Linux within Windows Terminal. You’ll maximize your productivity using powerful tools such as PSReadLine for PowerShell and ZSH on Linux, and discover useful tips and tricks for common developer tools like Git and SSH. Finally, you’ll see how Windows Terminal can be used in common development and DevOps tasks, such as developing frontend JavaScript applications and backend REST APIs, and managing cloud-based systems like Amazon Web Services (AWS), Microsoft Azure, and Google Cloud.

By the end of this book, you'll not only be well-versed with Windows Terminal, but also have learned how to effectively use shells like PowerShell Core and ZSH to become proficient at the command line.

Chapter 1: Getting started with the new Windows Terminal

At the Build 2019 conference, Microsoft made an exciting announcement: Windows 10 was getting a brand new command-line terminal! Custom built for the command prompt, PowerShell, and the Windows Subsystem for Linux, this new terminal promised to bring a modern, configurable, and open source command-line experience. In May 2020, Microsoft released the 1.0 version of the new Windows Terminal.

Windows Terminal is a separate application from the old Windows command line. This approach allows both terminals to live side by side, and enables Microsoft to rapidly release new features for Windows Terminal without endangering the backward compatibility of the old terminal.

By the end of this chapter, we will be up and running with Windows Terminal, having covered the following topics:

We'll cover why Windows needed a new terminal at all, how this new terminal is radically different from the old one, and take our first steps to download, install, and launch it.

Why a new terminal?

Microsoft's old terminal, conhost.exe, has been showing its age. While it has seen some impressive improvements lately, such as ANSI/VT support and advanced settings, the primary goal of conhost.exe is to be backward-compatible with older applications. This backward-compatibility constraint can sometimes be at odds with the fast-paced improvements in other parts of Windows 10.

While both PowerShell and the shells running under Windows Subsystem for Linux (WSL) have been seeing constant, rapid improvement, the "user experience" of the Windows command line was in vast need of an upgrade, when compared to its macOS and GNU/Linux counterparts.

As we're getting started, it's useful to understand the difference between a terminal and a shell. A terminal is essentially "what you see" when using the command line—it renders the text, draws any user interface (UI) widgets, and accepts keyboard and mouse input. The terminal will then send this input to the shell for processing. The old terminal on Windows was called conhost.exe and was the only built-in terminal; however, there were and still are alternative third-party terminals such as ConEmu and Hyper.

A shell doesn't have a UI; it's a command-line program that receives input from the terminal, evaluates that input, and returns the result. Shells, such as the command prompt, PowerShell, and those running in WSL, require a terminal to collect input and display output. Launching the cmd.exe or powershell.exe shells from the Start menu or Run dialog will implicitly start the conhost.exe terminal, which can make the distinction less obvious for end users:

Figure 1.1 – PowerShell, running in both the old conhost on the left, and the new Windows Terminal on the right

A more in-depth discussion about the differences between shells and terminals can be found on Scott Hanselman's blog at https://www.hanselman.com/blog/whats-the-difference-between-a-console-a-terminal-and-a-shell.

The modern foundations of Windows Terminal

When working with the command line, it's common to have a couple of command lines open. Perhaps a couple of operations need to be monitored at the same time, or some commands need to execute in PowerShell, and others need to use WSL. In the old terminal, the only option is to open separate windows and then Alt + Tab between them.

The new Windows Terminal comes with multiple options for managing these tasks. It features built-in tab support, each tab with its own shell, and all available within the same window:

Additionally, some operations work best with multiple shells open side by side. The old terminal again had no support for this; the only option was to use separate windows positioned next to each other. The new Windows Terminal supports "panes" that can open multiple different shells within the same tab. It's not just limited to two panes, either—the terminal supports multiple side-by-side panes split both vertically and horizontally:

Figure 1.3 – The new Windows Terminal with multiple shells open in a single tab

The modern UI features are not just limited to tabs and panes; the entire terminal has been written from the ground up to take advantage of the latest technology. The terminal itself is written using the Universal Windows Platform (UWP) framework with XAML Islands, and text rendering is handled by a GPU-accelerated rendering engine using DirectX.

This technology stack, in addition to being a flexible, fast, and solid foundation, enables improved visual effects as well. For example, the new Windows Terminal natively supports transparency using an effect called acrylic, as well as background images and GIFs: 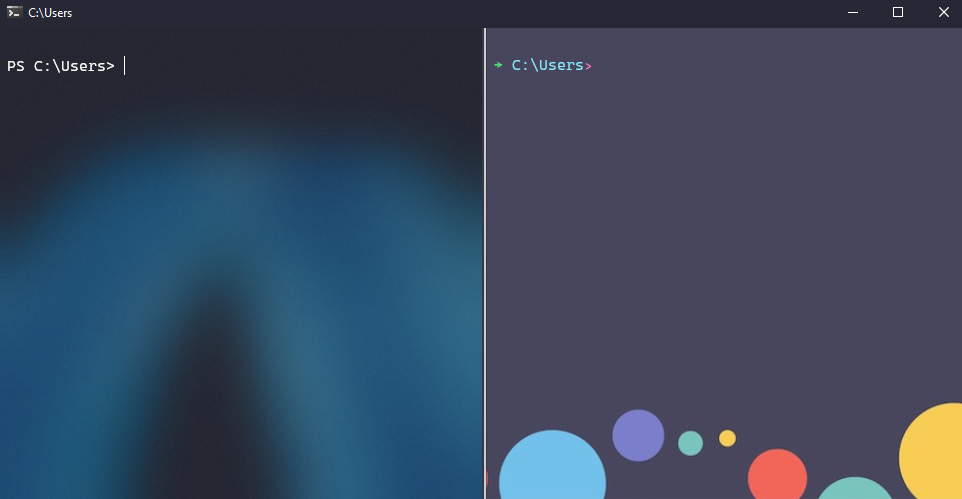 The new, GPU-accelerated rendering engine has all the modern features expected for a first-class command-line experience. The GPU acceleration results in ultra-fast and crisp text rendering, and the new rendering engine enables Unicode character support. While full, multi-language Unicode support is still a work in progress, the foundation is laid.

Figure 1.5 – The Cascadia Code font at a selection of font weights

Cascadia Code currently has support for a wide range of characters, including Cyrillic, Greek, and Vietnamese. It's open source, licensed under the SIL Open Font License, so progress for supporting additional languages can be tracked on GitHub, at https://github.com/microsoft/cascadia-code/.

Cascadia Code is called a programming font due to its support for optional programming ligatures. A ligature is a font feature that allows multiple characters to be rendered as a single glyph. For example, when typing the characters in the first row in the following image, they will be rendered as the bottom row:

In addition to programming ligatures, Cascadia Code also supports Powerline glyphs, a popular terminal customization that can improve the look of the command-line prompt, making it stand out from the input/output text around it:

As mentioned, all these features are optional—the Cascadia font comes in four variations that allow enabling or disabling of both programming ligatures and Powerline glyphs:

Customization of the old terminal was quite frustrating; the options were distributed across both the Windows Registry and inside the shortcut files themselves! The new Windows Terminal fixes this and features a settings.json file with a documented schema.

The benefit of using a JSON file with a schema is two-fold: editors such as Visual Studio Code can provide a first-class editing experience with documentation and autocomplete, and the settings.json file can be version-controlled and easily shared across computers. 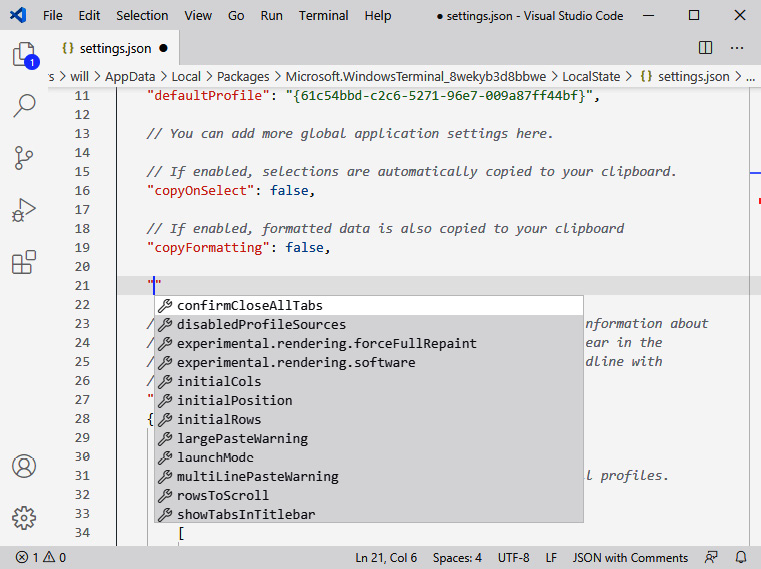 Additionally, the built-in Settings UI provides an easier way to customize the terminal. The Settings UI still uses the settings.json file behind the scenes, so the resulting configuration can still be easily shared and version controlled. 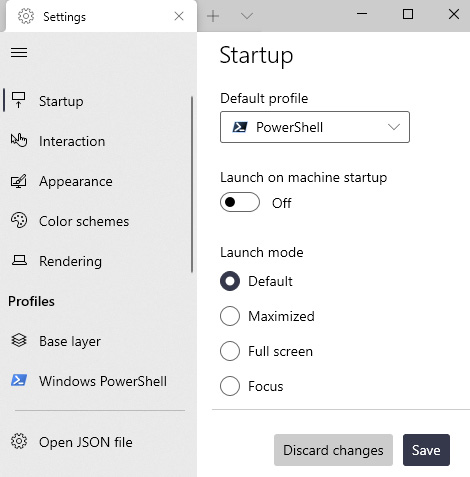 The settings.json file controls all aspects of the terminal, such as its themes and colors, keybindings, and window behavior. We'll dive deep into this file in Chapter 4, Customizing your Windows Terminal settings.

The repository has hundreds of open source contributors, working on all aspects of the terminal. Several major features, such as background image support, have been added by the community. Whether it's improving documentation, submitting bug reports, or discussing and then adding features, feel free to get involved! Check out the CONTRIBUTING.md file in the GitHub repository to get started.

Now that we've covered the benefits of the new Windows Terminal, let's take our first step and get it installed! 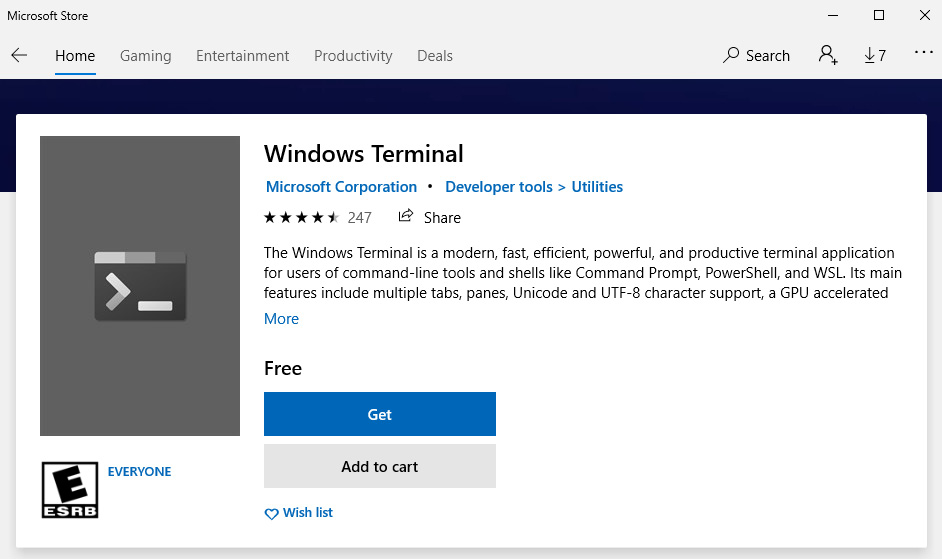 Figure 1.12 – The Windows Terminal available in the Microsoft Store

While this is the best way to both install the new Windows Terminal and ensure it stays up to date, there are several other ways to install Windows Terminal that might better fit certain automation scenarios:

Now that we have Windows Terminal installed, let's start it up!

It's worth spending some time reviewing how to efficiently start our Windows Terminal, as it's something we'll be doing frequently!

The normal way to start Windows Terminal is to select it from the Start menu, either by selecting the icon using the mouse or typing out the words windows terminal in the Start menu search bar.

Luckily, there are faster ways. Windows Terminal ships with a binary, wt.exe, that can be used to quickly start the terminal. Press wt<enter> from the Start menu, Run dialog, or Windows Explorer location bar to open the terminal. wt.exe has several interesting command-line flags, such as -F to launch in fullscreen mode. We'll learn more about the capabilities of wt.exe in Chapter 6, Setting up keyboard shortcuts.

Figure 1.13 –Windows Terminal pinned to the taskbar in the first position 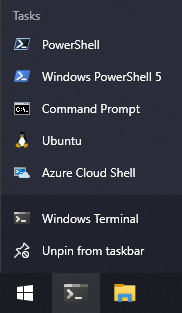 Figure 1.14 – The Windows 10 Jump List for the Windows Terminal

In this chapter, we learned the differences between a terminal and a shell. We discussed how the new Windows Terminal has several key benefits over the older conhost.exe, including a modern, GPU-accelerated UI, a flexible JSON-based configuration system, and an open source community. In addition, we learned a few ways of installing the new Windows Terminal, as well as how to efficiently launch it from anywhere in Windows 10.

In the next chapter, we'll learn how to effectively use Windows Terminal. We'll cover all major components of Windows Terminal, including the terminal tabs, panes, and interacting with various shells. We'll also cover a few interesting keyboard shortcuts, as well as the new command palette feature.

If you found the discussion of terminals versus shells interesting, you may also enjoy reading about ConPTY—the new modern console infrastructure that enabled Windows Terminal to be possible in the first place! Rich Turner, when he was the Senior Program Manager of Windows Console and Command Line, wrote an excellent blog post series titled Windows Command-Line that walks through the nitty-gritty details: https://devblogs.microsoft.com/commandline/windows-command-line-backgrounder/.

If you're interested in learning more about the modern technology powering the new Windows Terminal, check out Building Windows Terminal with WinUI by Kayla Cinnamon, the Program Manager of Windows Terminal, Console, Command Line, and Cascadia Code: https://devblogs.microsoft.com/commandline/building-windows-terminal-with-winui/. 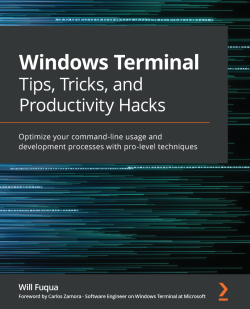