The book starts off with enabling the user with the right tools required to start developing. It focuses on getting the IDE ready, and project and item templates. By the end of the book the user will be familiarized with the different aspects of the platform itself. The transition from one chapter to another is short and focused so that you can get to the meat of the topic quickly.

In this chapter, we will try to understand the three important aspects that make up Windows Phone Development using F# (pronounced as F sharp), namely:

We will go over these aspects, one by one in the coming sections.

What is Windows Phone?

Windows Phone is the new mobile operating system from Microsoft Corporation and was launched in October 2010. After the initial release, there were a series of updates to Windows Phone with the recent one being Windows Phone 7.5 (Mango).

Windows Phone has a fresh and new user interface called Modern UI , a typography-based design language that is inspired by the transport system.

But, one had to face the challenges of handling different form factors, device capabilities, hardware differences, and other incompatibilities. With Windows Phone, Microsoft has made sure that it provides a common design and a common set of capabilities for devices from many different manufactures. So be it any device from any manufacturer, as a developer we only have one set of design and capabilities to tackle. This makes it easier for the developers to concentrate on their application and not worry about any other nuances.

The following image from http://msdn.microsoft.com/en-us/library/gg490768.aspx shows the various features a Windows Phone has to offer for both developers as well as consumers: 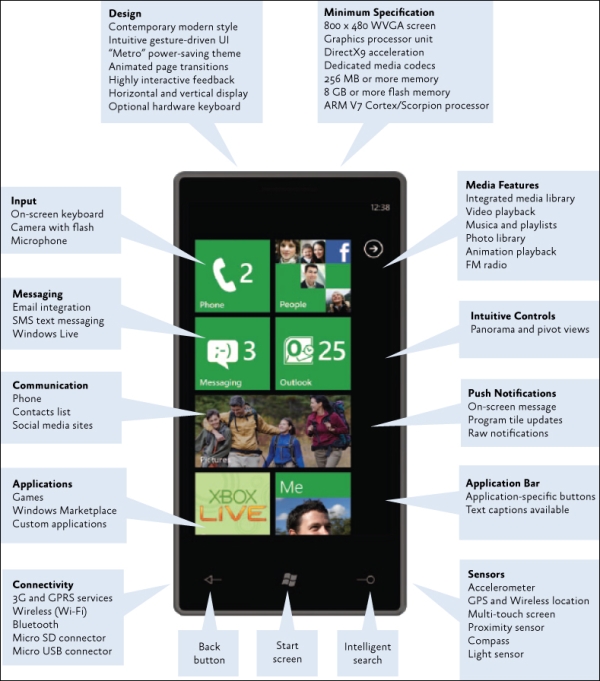 The platform itself is made up of four main components. The following figure from http://i.msdn.microsoft.com/dynimg/IC513005.jpg shows the components of Windows Phone Application Platform: 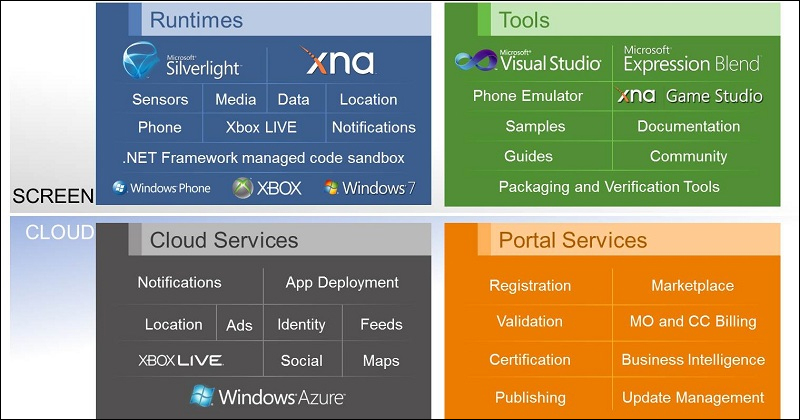 In this figure we have:

The components of interest for any developer are runtime and tools. Runtime because that's the base on which applications are developed. Tools play another major part in the development experience. Visual Studio and Expression Blend try to enhance the development experience by providing features that makes a developer's job easy while developing. Visual Studio in particular is a well-known IDE, which lets you create, debug, and deploy an application without having to go out of the IDE.

All phases of the development can be achieved staying within the IDE and this is the biggest experience one gets when on this platform. Expression Blend makes visual designing very easy as it allows the drag-and-drop capability on the design surface. When designing in Blend, you just set a bunch of properties and the code is automatically written by the Blend for you.

According to Microsoft Research, F# is:

A succinct, expressive, and efficient functional and object-oriented language for .NET that helps you write simple code to solve complex problems.

To start developing for Windows Phone using F# as a language, you will need some prerequisites to be installed on your development system. The prerequisites are as follows:

So let's take a look at these one by one.

When you install Visual Studio 2010 (Professional or Ultimate) and choose the default options during installation, the installer will, by default, install Visual C#, Visual C++, Visual Basic, and Visual F#. This is by far the easiest way of starting to develop with F#.

The Software Development Kit (SDK) provides us with the tools needed to develop applications and games for the Windows Phone platform. The SDK can be downloaded from http://gnl.me/WPSDK71. The SDK installs the following components on your development system:

The easiest way to get up and running is to utilize one of the project templates available through the Visual Studio Gallery. These templates have been created by the F# community and they provide a great way to kick-start your project. Daniel Mohl, an F# Most Valuable Professional (MVP) has written a couple of Visual Studio templates that will help us to quickly get up and running with Windows Phone development using F#. You can download any of the following available templates based on your needs. The templates and URL from where you can download them is as follows:

After understanding Windows Phone as a platform and F# as a language, we then looked at the prerequisites that are required for developing applications for Windows Phone using F# as the language.

In the next chapter we will take a look at the different project templates we downloaded. We will go in depth into each project and understand the various components of each project. 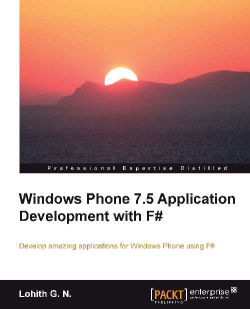