Vue.js is one of the latest new frameworks to have piqued the interest of web developers due to its reactivity, reusable components, and ease of use. This video course shows developers how to leverage its features to build high-performing, reactive web interfaces with Vue.js. From the initial structuring to full deployment, this video provides step-by-step guidance to developing an interactive web interface from scratch with Vue.js.

You will start by building a simple application in Vue.js so you can observe its features in action. Delving into more complex concepts, you’ll learn about reactive data binding, reusable components, plugins, filters, and state management with Vuex. It will also teach you how to bring reactivity to an existing static application using Vue.js. By the time you finish this video, you will have built, tested, and deployed a complete reactive application in Vue.js from scratch.

This course is a thorough, step-by-step guide that shows you how to build complete web apps with Vue.js. While teaching you its intricacies, the course also shows you how to implement the MVVM architecture in the real world and build high-performing web interfaces.

Course is OK so far. Note that this is a Udemy course. Better buy it there so you can use their app. 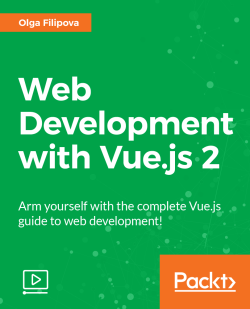