The book provides a complete overview of web development in Julia with a step-by-step tutorial for developing a web app with the Genie framework. This book serves as an elementary module to realize the potential of Julia in the Web Development ecosystem.

By the end of this book, you’ll have an overview of the advantages and principles of web development with Julia and Genie framework. 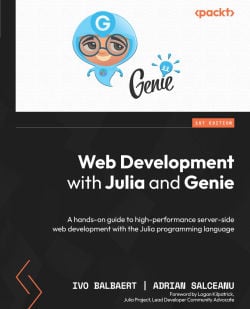