• Ideal for newcomers to UnrealScript

Over eight feature-filled chapters, Alan Thorn demystifies video game development by showing you how to get up and running with UnrealScript so you can make your own games. This course takes you from the foundations upwards: from configuring the necessary software and editors to compiling your code and creating a complete and working game.

This course is a comprehensive introduction to UnrealScript presented by Alan Thorn, veteran game developer and author with over 12 years of industry experience. Taking a step-by-step approach, you’ll move from the basics of configuring the UDK and its files to coding a feature-filled game complete with timed behavior and editor integration.

Clear and concise, this course takes you from start to finish through the creation of a practical game in UnrealScript, demonstrating the core features of the language along the way. It starts by exploring how to configure UDK files and software and ends with a working game featuring time-limits, editor integration, component-based actors, and custom Kismet nodes.

Overall, you’ll see how to build a game from the ground up. Along the way, you’ll explore core UnrealScript features such as console commands for improving debugging, class states for dynamically changing actor behavior, custom Kismet nodes to control program flow visually, the ability to tweak class settings through text-based configuration files, and much more besides.

By the end of this course, you’ll have coded a feature-filled game in UnrealScript and the UDK. In achieving this, you’ll establish a solid foundation in UnrealScript that you can utilize when building your own games. 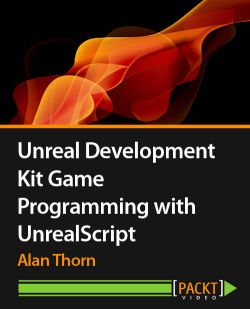