Unity 3d is the game engine of choice for creating professional looking games at no cost. Its combination of powerful tools and outstanding community support make it the natural choice for experienced and aspiring game developers.

Unity3D Game Development Hotshot will show you how to exploit the full array of Unity3Dtechnology in order to create an advanced gaming experience for the user. It has eight exciting and challenging projects with step- by-step explanations, diagrams, screenshots, and downloadable materials.

Every project is designed to push your Unity skills to the very limits and beyond. You will create a hero/heroine for a role playing game. Create a menu for the RPG game allowing you to customize your character with powerups, armor, and weapons. You will shade, model, rig, and animate your hero/heroine. The end result will be a  character on the level of Final Fantasy, far superior to a simple sprite.

Now for some damage - rocket launchers! Typically the most powerful weapons in any first person shooter, you will create a rocket launcher that has fire and smoke particles and most importantly causes splash damage for that all important area effect. Create AI controlled enemies for your hero/heroine to eliminate with the rocket launcher. Forge  a destructible  interactive world so if the rocket launchers miss their target they will at least cause significant damage to the surrounding environment. Learn to save and load your game so you can take a break from the action for life’s necessities like going to the bathroom. Incorporate social gaming by uploading scores online so everyone can see the carnage. 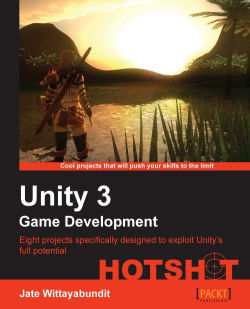