C++ is one of the most widely-used programming languages and has applications in a variety of fields, such as gaming, GUI programming, and operating systems, to name a few. Through the years, C++ has evolved into (and remains) one of the top choices for software developers worldwide. This book will show you some notable C++ features and how to implement them to meet your application needs. Each problem is unique and doesn't just test your knowledge of the language; it tests your ability to think out of the box and come up with the best solutions. With varying levels of difficulty, you'll be faced with a wide variety of challenges. And in case you're stumped, you don't have to worry: we've got the best solutions to the problems in the book. So are you up for the challenge?

Write a program that calculates and prints the sum of all the natural numbers divisible by either 3 or 5, up to a given limit entered by the user.

Write a program that, given two positive integers, will calculate and print the greatest common divisor of the two.

Write a program that will, given two or more positive integers, calculate and print the least common multiple of them all.

Write a program that computes and prints the largest prime number that is smaller than a number provided by the user, which must be a positive integer.

Write a program that prints all the sexy prime pairs up to a limit entered by the user.

Write a program that prints all abundant numbers and their abundance, up to a number entered by the user.

Write a program that prints the list of all pairs of amicable numbers smaller than 1,000,000.

Write a program that prints all Armstrong numbers with three digits.

Write a program that prints the prime factors of a number entered by the user.

Write a program that, given a number entered by the user, prints its Roman numeral equivalent.

Write a program that determines and prints which number up to 1 million produces the longest Collatz sequence and what its length is.

Write a program that computes the value of Pi with a precision of two decimal digits.

Write a program that validates that 10-digit values entered by the user, as a string, represent valid ISBN-10 numbers.

The solution to this problem is to iterate through all numbers from 3 (1 and 2 are not divisible by 3 so it does not make sense to test them) up to the limit entered by the user. Use the modulo operation to check that the rest of the division of a number by 3 and 5 is 0. However, the trick to being able to sum up to a larger limit is to use long long and not int or long for the sum, which would result in an overflow before summing up to 100,000:

This can be very simply implemented in C++ using a recursive function:

A non-recursive implementation of Euclid's algorithm should look like this:

In C++17 there is a constexpr function called gcd() in the header <numeric> that computes the greatest common divisor of two numbers.

A function to compute the least common multiple may look like this:

To compute the lcm for more than two integers, you could use the std::accumulate algorithm from the header <numeric>:

In C++17 there is a constexpr function called lcm() in the header <numeric> that computes the least common multiple of two numbers.

A prime number is a number that has only two divisors, 1 and the number itself. To find the largest prime smaller than a given number you should first write a function that determines if a number is prime and then call this function, starting from the given number, towards 1 until the first prime is encountered. There are various algorithms for determining if a number is prime. Common implementations for determining the primality appear as follows:

This function can be used as follows:

In the previous challenge, we implemented a function that determines whether an integer is a prime number. We will reuse that function for this exercise. What you have to do is check that if a number n is prime, the number n+6 is also prime, and in this case print the pair to the console:

You could take it as a further exercise to compute and displays the sexy prime triples, quadruplets, and quintuplets.

To determine the sum of proper divisors, we try all numbers from 2 to the square root of the number (all prime factors are less than or equal to this value). If the current number, let’s call it i, divides the number, then i and num/i are both divisors. However, if they are equal (for example, if i = 3, and n = 9, then i divides 9, but n/i = 3), we add only i because proper divisors must only be added once. Otherwise, we add both i and num/i and continue:

Printing abundant numbers is as simple as iterating up to the specified limit, computing the sum of proper divisors and comparing it to the number:

In the above sample, sum_proper_divisors() is the function seen in the solution to the abundant numbers problem.

The above function prints pairs of numbers twice, such as 220,284 and 284,220. Modify this implementation to only print each pair a single time.

An Armstrong number (named so after Michael F. Armstrong), also called a narcissistic number, a pluperfect digital invariant, or a plus perfect number, is a number that is equal to the sum of its own digits when they are raised to the power of the number of digits. As an example, the smallest Armstrong number is 153, which is equal to

To determine if a number with three digits is a narcissistic number, you must first determine its digits in order to sum their powers. However, this involves division and modulo operations, which are expensive. A much faster way to compute it is to rely on the fact that a number is a sum of digits multiplied by 10 at the power of their zero-based position. In other words, for numbers up to 1,000, we have a*10^2 + b*10^2 + c. Since you are only supposed to determine numbers with three digits, that means a would start from 1. This would be faster than other approaches because multiplications are faster to compute than divisions and modulo operations. An implementation of such a function would look like this:

You could take it as a further exercise to write a function that determines the narcissistic numbers up to a limit, regardless their number of digits. Such a function would be slower because you first have to determine the sequence of digits of the number, store them in a container, and then sum together the digits raised to the appropriate power (the number of the digits).

Gray code, also known as reflected binary code or simply reflected binary, is a form of binary encoding where two consecutive numbers differ by only one bit. To perform a binary reflected Gray code encoding, we need to use the following formula:

This is equivalent to the following:

For decoding a binary reflected Gray code, the following formula should be used:

These can be written in C++ as follows, for 32-bit unsigned integers:

To determine the Roman numeral of a number, use the following algorithm:

This function can be used as follows:

The problem you are to solve is to generate the Collatz sequence for all positive integers up to one million, determine which of them is the longest, and print its length and the starting number that produced it. Although we could apply brute force to generate the sequence for each number and count the number of terms until reaching 1, a faster solution would be to save the length of all the sequences that have already been generated. When the current term of a sequence that started from a value n becomes smaller than n, then it is a number whose sequence has already been determined, so we could simply fetch its cached length and add it to the current length to determine the length of the sequence started from n. This approach, however, introduces a limit to the Collatz sequences that could be computed, because at some point the cache will exceed the amount of memory the system can allocate:

A suitable solution for approximately determining the value of Pi is using a Monte Carlo simulation. This is a method that uses random samples of inputs to explore the behavior of complex processes or systems. The method is used in a large variety of applications and domains, including physics, engineering, computing, finance, business, and others.

To do this we will rely on the following idea: the area of a circle with diameter d is PI * d^2 / 4. The area of a square that has the length of its sides equal to d is d^2. If we divide the two we get PI/4. If we put the circle inside the square and generate random numbers uniformly distributed within the square, then the count of numbers in the circle should be directly proportional to the circle area, and the count of numbers inside the square should be directly proportional to the square’s area. That means that dividing the total number of hits in the square and circle should give PI/4. The more points generated, the more accurate the result shall be.

For generating pseudo-random numbers we will use a Mersenne twister and a uniform statistical distribution:

The International Standard Book Number (ISBN) is a unique numeric identifier for books. Currently, a 13-digit format is used. However, for this problem, you are to validate the former format that used 10 digits. The last of the 10 digits is a checksum. This digit is chosen so that the sum of all the ten digits, each multiplied by its (integer) weight, descending from 10 to 1, is a multiple of 11.

The validate_isbn_10 function, shown as follows, takes an ISBN as a string, and returns true if the length of the string is 10, all ten elements are digits, and the sum of all digits multiplied by their weight (or position) is a multiple of 11:

You can take it as a further exercise to improve this function to also correctly validate ISBN-10 numbers that include hyphens, such as 3-16-148410-0. Also, you can write a function that validates ISBN-13 numbers.
Read more Unlock this book with a 7 day free trial.
About the Author
quick, convenient and easy

4
13 May 2019 bubblebutt4825
A straightforward and quick way of finding stuff, reviewing, checking out.

5
07 May 2019 Agam Brahma
Very thorough. I have not gone through the entire book or worked out the challenges, but I look forward to learning a great deal when I do so. 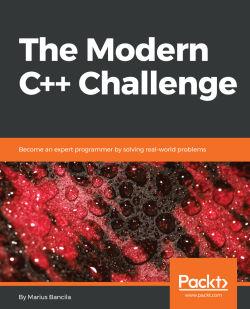