React has rapidly become one of the most powerful tools for building web applications. Top sites using React include Facebook, Twitter, Netflix, Airbnb, and more! This course is perfect for entrepreneurs or startups looking to bring their ideas to life; React developers command some of the highest salaries in the development world. This course is designed to turn students with no programming/web development experience into accomplished React developers.

This course will show you how to:

By the end of the course, you will have built a sophisticated Photowall web application with React, Redux, and CSS. This powerful application will impress even the most senior developers and ensure you have hands-on skills in React and Redux that you can bring to any project or company.

All the code files are placed at https://github.com/PacktPublishing/The-Complete-React-Js-and-Redux-Course---Build-Modern-Web-Apps

You'll go from beginner to extremely high-level and your instructor will complete each task with you step-by-step on screen.

This is very clear and carefully explained. I totally enjoyed this product.

Missing videos. when He say on one video that the setup is on the previous video and it isn't... 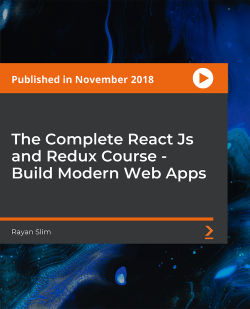