Docker is a software framework for building, running, and managing containers on servers and the cloud. In this course, you’ll start by installing Docker on your computer - macOS, Windows, or Linux. Afterward, you’ll jump into tons of practice activities and use different Docker features. You’ll pull different Docker images and run multiple containers using them.

In practice sections, you’ll perform multiple practice Docker activities, such as running Docker containers in the foreground and background, then connecting to certain processes in Docker from the terminal. After that, you’ll learn to expose internal container ports to the outside and add environment variables for containers. You’ll also create custom names and hostnames for containers, create a custom bridge network and run multiple containers inside of it, communicate between containers, and persist container folders using volumes mapping.

Next, you’ll also learn and practice how to use different Docker images (view and edit them). For that, you will not use the terminal; instead, you’ll use the GUI application Visual Studio Code.

By the end of this course, you’ll gain fundamental practical knowledge of Docker and be able to easily use it for the development and testing of your applications.

All the resource files are uploaded on the GitHub repository at https://github.com/PacktPublishing/docker 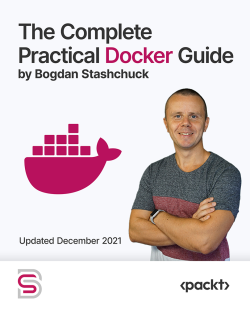