The course starts by taking you through the process of setting up a penetration testing lab. Next, you’ll become familiar with the Linux OS and Linux commands and explore the basic concepts of TCP/IP and the OSI model. Moving along, you’ll learn how to gather information about computer systems and networks passively and actively and use the Metasploit tool to perform privilege escalation. Next, you’ll perform web application pen testing and learn modern techniques to exploit common web application vulnerabilities such as SQL injection, XSS, CSRF, and command injection. You’ll also learn how to perform wireless network pen testing to crack Wi-Fi passwords using Aircrack-ng, capturing packets, traffic sniffing, and Hashcat. Towards the end, you’ll grasp the fundamentals of Python programming and develop offensive Python tools for pen testing and automation.

By the end of this course, you’ll have developed all the essentials skills needed for ethical hacking and penetration testing. 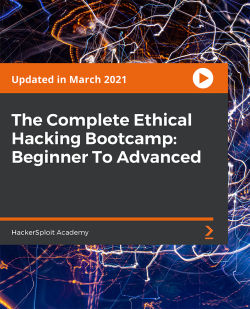