Initially, all processing used to happen on the server-side and simple output was the response to web browsers. Nowadays, there are so many JavaScript frameworks and libraries created that help readers to create charts, animations, simulations, and so on. By the time a project finishes or reaches a stable state, so much JavaScript code has already been written that changing and maintaining it further is tedious. Here comes the importance of automated testing and more specifically, developing all that code in a test-driven environment. Test-driven development is a methodology that makes testing the central part of the design process – before writing code developers decide upon the conditions that code must meet to pass a test. The end goal is to help the readers understand the importance and process of using TDD as a part of development.

This book starts with the details about test-driven development, its importance, need, and benefits. Later the book introduces popular tools and frameworks like YUI, Karma, QUnit, DalekJS, JsUnit and goes on to utilize Jasmine, Mocha, Karma for advanced concepts like feature detection, server-side testing, and patterns. We are going to understand, write, and run tests, and further debug our programs. The book concludes with best practices in JavaScript testing. By the end of the book, the readers will know why they should test, how to do it most efficiently, and will have a number of versatile tests (and methods for devising new tests) to get to work immediately.

There are several ways to develop a project. Testing is one of the most important phases in the development of any project, and in the traditional software development model, it is usually executed after the code for functionality is written. Test-driven development (TDD) makes a big difference by writing tests before the actual code.

When Tim Berners-Lee wrote the first ever web browser around 1990, it was supposed to run HTML, neither CSS nor JavaScript. Who knew that WWW will be the most powerful communication medium? Since then, there are now a number of technologies and tools that help us write the code and run it for our needs. We do a lot these days with the help of the Internet. We shop, read, learn, share, and collaborate... well, a few words are not going to suffice to explain what we do on the Internet, are they? Over the period of time, our needs have grown to a very complex level, so is the complexity of code written for websites. It's not plain HTML anymore, not some CSS style, not some basic JavaScript tweaks. That time has passed. Pick any site you visit daily, view source by opening developer tools of the browser, and look at the source code of the site. What do you see? Too much code? Too many styles? Too many scripts? The JavaScript code and CSS code is so huge to keep it as inline, and we need to keep them in different files, sometimes even different folders to keep them organized.

Now, what happens before you publish all the code live? You test it. You test each line and see if that works fine. Well, that's a programmer's job. Zero defect, that's what every organization tries to achieve. When that is in focus, testing comes into the picture, more importantly a development style that is essentially test driven. As the title for this book says, we're going to keep our focus on test-driven JavaScript development.

"The original description of TDD was in an ancient book about programming. It said you take the input tape, manually type in the output tape you expect, then program until the actual output tape matches the expected output. After I'd written the first xUnit framework in Smalltalk I remembered reading this and tried it out. That was the origin of TDD for me. When describing TDD to older programmers, I often hear, "Of course. How else could you program?" Therefore I refer to my role as "rediscovering" TDD."

If you go and try to find references to TDD, you would even get few references from 1968. However It's not a new technique, though it did not get so much attention at that time. Recently, an interest in TDD has been growing, and as a result there are a number of tools on the Web. For example, Jasmine, Mocha, DalekJS, JsUnit, QUnit, and Karma are among these popular tools and frameworks. More specifically, test-driven JavaScript development is becoming popular these days.

Test-driven development is a software development process, which enforces a developer to write a test before production code. A developer writes a test, expects a behavior, and writes code to make the test pass. It is needless to mention that the test will always fail at the start. You will learn more about the life cycle later in this chapter.

The need for testing

To err is human. As a developer, it's not easy to find defects in our own code, and often we think that our code is perfect. But there is always a chance that a defect is present in the code. Every organization or individual wants to deliver the best software they can. This is one major reason that every software, every piece of code is well tested before its release. Testing helps to detect and correct defects.

There are a number of reasons why testing is needed. They are as follows:

There was a study conducted by the National Institute of Standards and Technology (NIST) in 2002, which reported that software bugs cost the U.S. economy around $60 billion annually. With better testing, more than one-third of the cost could be avoided. The earlier the defect is found, the cheaper it is to fix it. A defect found post release would cost 10-100 times more to fix than if it had already been detected and fixed pre-release.

The report on the study performed by NIST can be found at http://www.nist.gov/director/planning/upload/report02-3.pdf.

If we draw a curve for the cost, it comes as an exponential. The following figure clearly shows that the cost increases as the project matures with time. Sometimes, it's not possible to fix a defect without making changes in the architecture. In those cases, the cost is sometimes so great that developing the software from scratch seems like a better option. 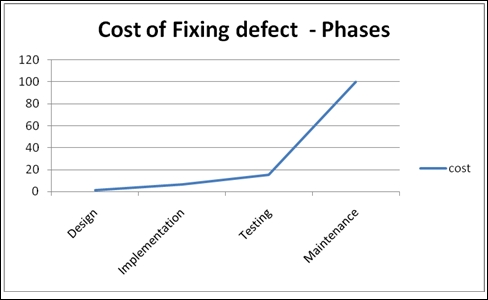 Any product, website, or utility, should be very well tested before it is launched. There are a number of testing techniques used to test software. From a block of code to system integration testing, every kind of testing is performed for a zero-defect system. Test-driven development is more about unit testing. It helps to learn about defects in a system at a very early stage. You will learn more about unit tests and testing concepts in the next chapter.

The following figure shows the cost of detecting and fixing defects in different testing types: 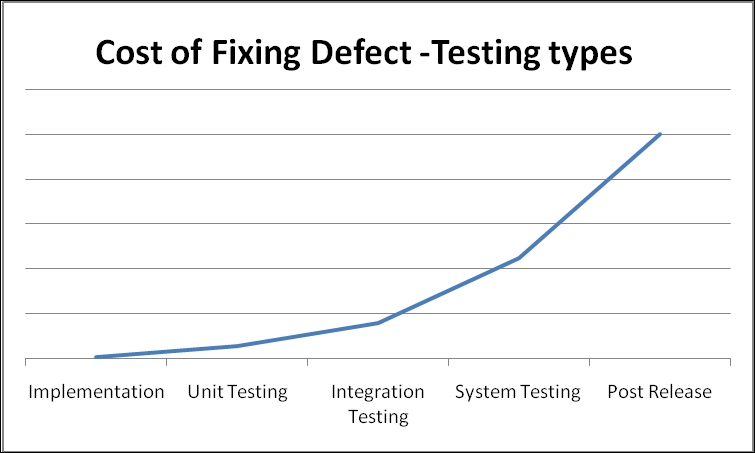 As we can clearly see, if unit testing is performed, the cost of correcting a defect is close to correcting defects at the time of implementation. Since TDD enforces writing unit tests, the cost of the overall project is reduced significantly by reducing the number of defects after release.

The life cycle of TDD

The life cycle of TDD can be divided into several steps. Each time a change is to be made into the system, tests cases are written first and then some code to make the tests pass, and so on. Let's get a closer look at the life cycle. See the following figure: 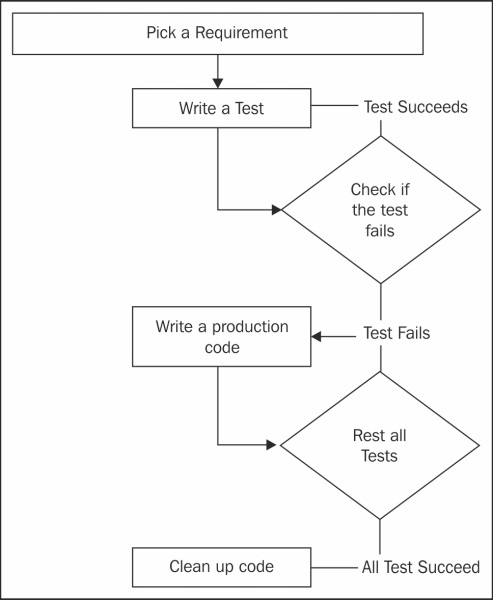 The different phases of the life cycle of TDD can be explained as follows:

The TDD life cycle is also defined as Red-Green-Refactor, which is also called as the microcycle.

This process can be illustrated as shown in the following figure: 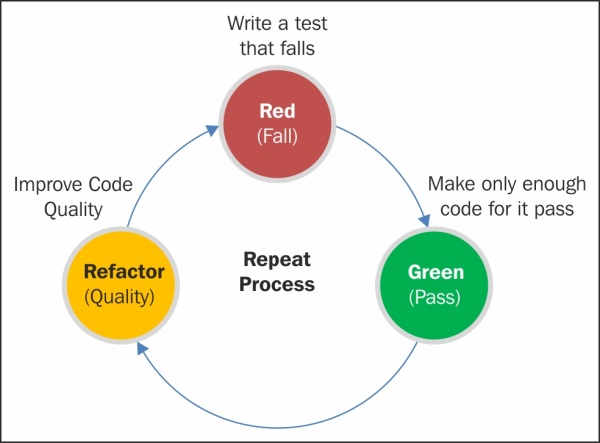 There are only three steps in this microcycle:

This microcycle provides rapid feedback to the developer. As soon as a change is made to the system, it is tested. If there is any error, it's detected as soon as possible and fixed.

When we talk about TDD, Agile is most often discussed. Sometimes, people have doubts about whether Agile can exist without TDD or not. Well, of course it can, though. Agile and some people would say that TDD is Agile at a bigger scale. Through TDD, both show similar characteristics, but they are different. Agile is a process where testing is done as soon as a component is developed. It's not necessary in Agile to write test cases first and then perform development. But in the case of TDD, a test is always written first, and then its corresponding minimal production code.

TDD is about how code should be written while Agile is about the whole development process, not just code and its testing. Agile does not tell you how to build the system. Agile methodology is a management process, which can use TDD as an integral part.

Agile, when combined in practice with TDD, brings the best results. This combination minimizes risks, defects, cost, and results in a nearly zero-defect system.

Benefits of TDD and common myths

Every methodology has its own benefits and myths. The following sections will analyze the key benefits and most common myths of TDD.

TDD has its own advantages over regular development approaches. There are a number of benefits, which help in making a decision of using TDD over the traditional approach.

Along with the benefits, TDD has some myths as well. Let's check few of them:

There are many myths, and covering all of them is not possible. The point is, TDD offers developers a better opportunity to deliver quality code. TDD helps organizations by delivering close to zero-defect products.

In the next chapter, you will learn the concepts of unit testing, and how to write unit tests and run them.

This product meets my expectations

Good writing and pace. Tho I just started.

Not a very captive book, like i was reading a manual and not a book.Still, have something to teach us. 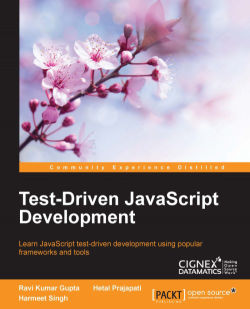